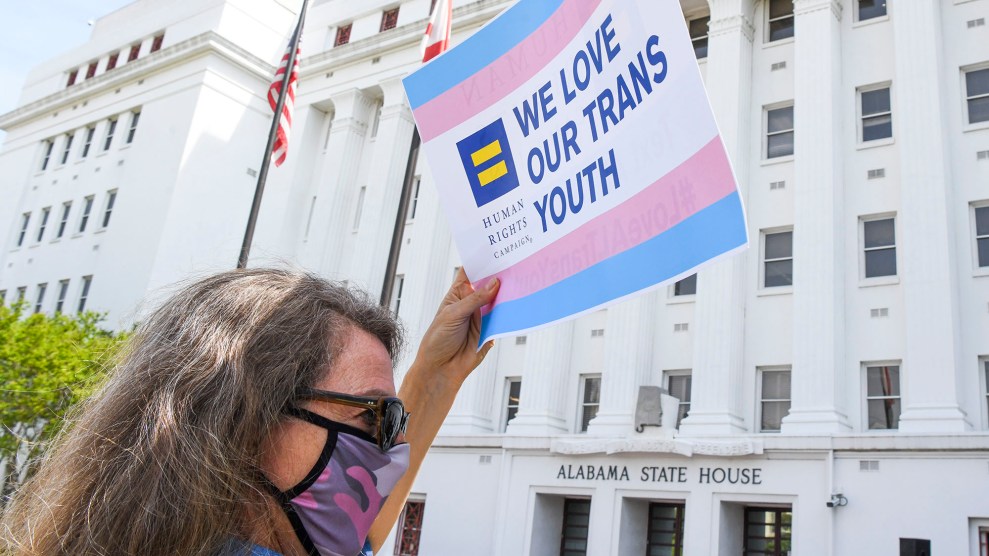 Alabama lawmakers are on the cusp of passing a bill that would stop transgender teens from receiving life-saving medical care like puberty blockers and hormonal therapy. The bill would criminalize doctors who provide these treatments to teens, threatening them with up to 10 years in prison. It would also require school administrators to out transgender students to their parents if they are not yet out at home.

If lawmakers pass the bill—and they’re expected to during a vote in the coming days—Alabama would become the second state to criminalize gender-affirming medical care for all trans children. (Arkansas was the first, last year, but a court temporarily blocked that law. And Tennessee passed a more limited law last year criminalizing gender-affirming care for prepubescent kids.)

“There has been an explosion of these bills.”

Other states could follow: Arizona and Ohio are among dozens where similar bills have been introduced this year. “There has been an explosion of these bills,” says Cathryn Oakley, who tracks legislation for the Human Rights Campaign, an LGBTQ advocacy group. Of more than 130 anti-trans bills introduced across the country this year, almost exclusively by Republicans, at least 38 would curb gender-affirming health care, she says.

Idaho lawmakers have been contemplating legislation that would punish doctors who provide these treatments with one of the most severe penalties: life in prison. And in Texas, Gov. Greg Abbott ordered officials in February to investigate parents for child abuse if they authorized gender-affirming care for their kids. (Both measures have faced hurdles. In Idaho, a caucus of Republican state senators suggested this week they would not support the bill because it undermined parents’ rights to make medical decisions for their children. And in Texas, the governor’s directive, which was nonbinding, was put on hold last week while a court considers whether it was unconstitutional.)

The Republicans pushing these bills claim that impressionable children are pressured into gender-affirming treatments by their parents and doctors, and that these treatments are harmful and might lead to fertility problems. “[Y]oung people are not old enough to make these sorts of permanent, life-altering decisions,” Illinois state Rep. Tom Morrison said in 2019 after proposing a bill. He falsely stated that the treatments could make them “sterile.” An older version of Alabama’s bill described gender-affirming care as “uncontrolled human medical experimentation that may result in grave and irreversible consequences.”

But typical gender-affirming treatments for kids are deemed safe and effective by major medical associations like the American Medical Association, the American Psychological Association, and the American Academy of Pediatrics. They are often medically necessary to help kids who are struggling with suicidal thoughts and depression because of their gender dysphoria, or feelings of distress that are caused by a mismatch between their gender identity and the way they look. The treatments are given slowly, and only when children request it. And doctors aren’t performing any surgeries on kids that could permanently alter their bodies or make them infertile.

Instead, most trans kids begin with a “social transition,” taking nonmedical steps to live as their gender, whether that means adopting a new name and pronouns, changing their hair length, or wearing different clothes. Young teens can then be recommended reversible prescriptions called puberty blockers, which are like a pause button for puberty, offering them a chance to grow older and explore their gender without dealing with body changes that could make their gender dysphoria worse. Older teenagers might then start small doses of hormonal therapy, building up over time.

Studies suggest these medical interventions can greatly reduce their risk of depression, anxiety, and suicidal ideation, while helping them be more confident. (Researchers at the University of Washington found that trans teens who received puberty blockers and hormones were 73 percent less likely to be suicidal compared with those who did not.) It’s not until adulthood that they might opt for surgeries on their breasts or genitals.

Bills banning gender-affirming medical care for kids have become much more common during the pandemic. Before that, one or two states would introduce similar legislation each year. Then in 2020, more than two-dozen of these bills were filed, according to the Human Rights Campaign. In 2021, that number grew to 45. Most of the bills were pushed by the Alliance Defending Freedom and the Heritage Foundation, conservative groups that have also drafted model legislation for bills that would make it harder for trans kids to use school restrooms or play sports with their classmates.

“What [Alabama] is in effect doing is criminalizing being trans.”

Alabama almost criminalized gender-affirming medical care for kids last year, but lawmakers fell just shy of enough votes. This year, the bill passed the state Senate in February and is now up for a vote in the state House. The legislation would call for prison time or a fine of up to $15,000 for doctors who provide the medical treatments to transgender minors.

In addition to outlawing life-saving medical care, the bill would create another tough situation for teens: In Alabama, government officials have tried to block transgender people from obtaining driver’s licenses that reflect their gender—unless they’ve shown proof of the very gender-affirming surgeries that lawmakers are now trying to prohibit for people younger than 19. (The driver’s license policy was deemed unconstitutional by a court last year, but the state is appealing.) It’s a “double bind,” Gabriel Arkles, an attorney at the Transgender Legal Defense and Education Fund who helped sue over the policy, said in a statement. “It is impossible to get gender-affirming care, but surgery…is required for them to get the identification documents they need to live their lives. What the state is in effect doing is criminalizing being trans.”

If Gov. Kay Ivey signs the bill, LGBTQ rights groups are expected to sue quickly to block it, as they did in Arkansas. But that doesn’t ease the fear among teens who for years have heard that legislators want to take away their puberty blockers and hormonal therapy. At the Trevor Project, a crisis intervention charity for LGBTQ young people, crisis counselors say teens worried about the potential loss of their health care are now reporting more suicidal thoughts.