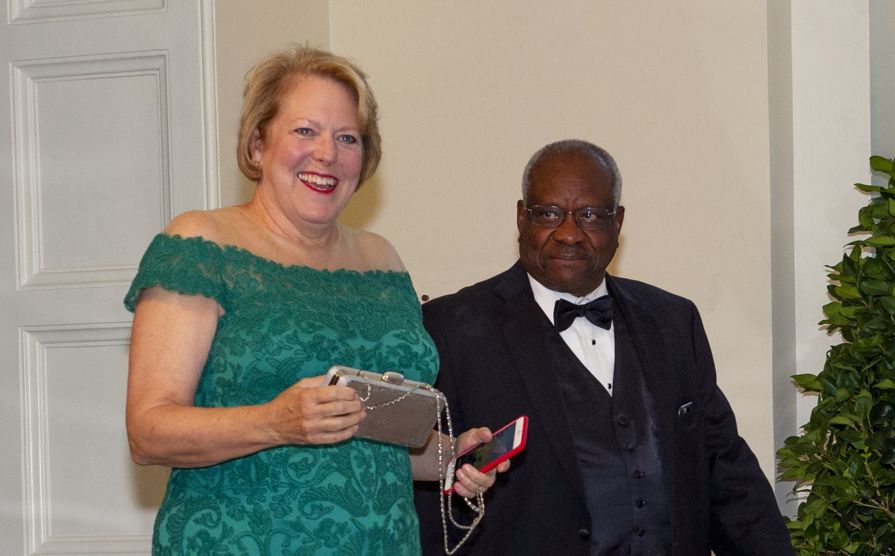 Ginni Thomas, the wife of Supreme Court justice Clarence Thomas, admitted for the first time that she attended the notorious Stop the Steal rally on January 6, 2020, which culminated in the attack on the US Capitol. The startling disclosure came during an interview with the Washington Free Beacon, a conservative website, and raises further questions about whether her political activism and ties to the far right constitute a conflict of interest for her husband.

In an otherwise sympathetic portrait of Ginni Thomas that sought to push back on mounting concerns that her behavior might violate ethical norms, the Free Beacon revealed that the longtime conservative activist had attended the rally on the Ellipse for a short period of time but returned home because she felt “cold,” before Trump supporters stormed the Capitol. That day, Thomas posted on Facebook in support of the rally, only to later walk back her comments, noting that she had written the posts “before violence.”

Thomas’s hyper-partisan remarks and conservative activism have long raised eyebrows, but recent reporting from the New Yorker and the New York Times has reinvigorated discussions about whether her ties to the fringes of the right pose a problem for the Supreme Court.

In her interview with the Free Beacon, Thomas attempted to dispel such concerns by claiming that she and her husband occupy separate “lanes.”

“The legal lane is my husband’s—I never much enjoyed reading briefs and judicial opinions anyway and am quite happy to stay out of that lane,” she said.

Thomas has never been a named party to a Supreme Court case; however, she has held positions of leadership in conservative groups involved in such cases and has, in her own capacity, taken significant action to target policies that her husband has voted to curtail or overturn, such as the Affordable Care Act, Roe v. Wade, and affirmative action.

Of particular note is her involvement in the group Groundswell, a conservative network, which—according to memos first obtained and reported by Mother Jones in 2013—sees itself as waging a “30 front war” against progressives and moderate Republicans. Thomas described herself as the “chairman” of Groundswell in 2019 and helped compile an “enemies list” of Republicans who the organization deemed insufficiently loyal to Donald Trump, according to reporting by the New York Times. She also has ties to far-right figures such as Steve Bannon, Sebastian Gorka, and Ali Alexander, and has proclaimed that America is under attack by the “deep state” and the “fascist left,” which includes “transsexual fascists.”

Legal experts have noted that the federal statute governing the recusal of Supreme Court justices is opaque, instructing them to sit out of cases where their impartiality “might reasonably be questioned”. The section of the statute concerning spouses only obliges justices to recuse themselves if their partners are direct parties, likely witnesses, or lawyers to the proceeding or if they possess interests “substantially affected” by it. However, many justices and judges have chosen to recuse themselves from cases to which they have more indirect connections to avoid the appearance of a conflict of interest. In a situation analogous to that of Ginni Thomas, Jane Sullivan Roberts, the wife of Justice John Roberts, retired from her career as a lawyer and resigned from her role leading an anti-abortion group upon her husband’s appointment to the court.