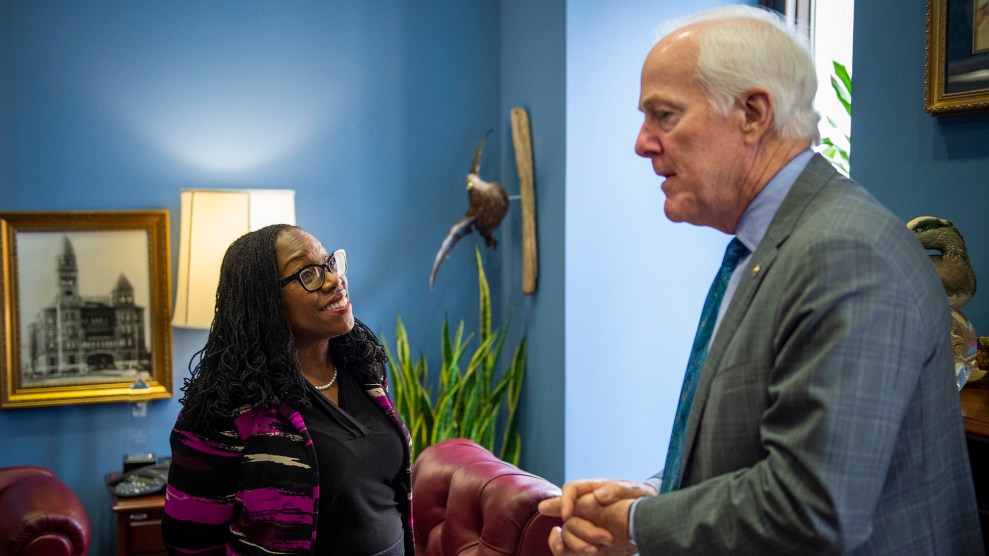 During the second day of Judge Ketanji Brown Jackson’s Supreme Court confirmation hearing Tuesday, Sen. John Cornyn (R-Texas) took the occasion to attack marriage equality. His line of questioning comes as conservatives have continued to use state legislatures and the courts to roll back rights for LGBTQ people. While a majority of Americans support marriage equality, it remains a target for repeal by many on the right.

In 2015, the Supreme Court held that marriage is a fundamental right guaranteed to same-sex couples as well as opposite-sex couples. Cornyn seemed to have two chief complaints about giving rights to the LGBTQ community, which he summed up in this question to Jackson: “Isn’t it apparent that when the Supreme Court decides that something that is not even in the Constitution is a fundamental right and no state can pass any law that conflicts with the Supreme Court’s edict, particularly in an area where people have sincerely held religious beliefs, doesn’t that necessarily create a conflict between what people may believe as a matter of their religious doctrine or faith and what the federal government says is the law of the land?”

Cornyn’s objections are, first, that granting equal rights to LGBTQ people conflicts with the religious beliefs of some people. To which Jackson responded, “Well, senator, that is the nature of a right. That when there is a right, it means that there are limitations on regulation, even if people are regulating pursuant to their sincerely held religious beliefs.”

Indeed, rights are guarantees of freedom that the Constitution does not leave to the whims of the political process, including the whims of those who would seek to enshrine their religious beliefs in law.

Cornyn’s other complaint is that marriage equality is not in the Constitution, and therefore in guaranteeing the freedom to marry, the Supreme Court invented a new right, as if on an irresponsible shopping spree. More than 200 years into the American experiment, Cornyn complained,  “the Supreme Court articulated a new fundamental right, which is a right to same-sex marriage.” He would later go on to ask, “What other unenumerated rights do you believe exist and how could we possibly anticipate what those might be?”

Cornyn frames marriage equality as a new right. But it is really just one more step in the long expansion of the right to marry to all people, just as the Supreme Court expanded that right to interracial couples in 1967. Much of the GOP is set on putting the breaks on the expansion of rights, particularly to the LGBTQ community, from Florida’s “Don’t Say Gay” bill to an upcoming Supreme Court case in which a web designer wants the Supreme Court to promise that she will not be required to create a wedding website for a same-sex couple.

Cornyn is giving voice to that conservative project. His questions are a sign of how conservatives view equal rights for LGBTQ people and how they plan to undo them.