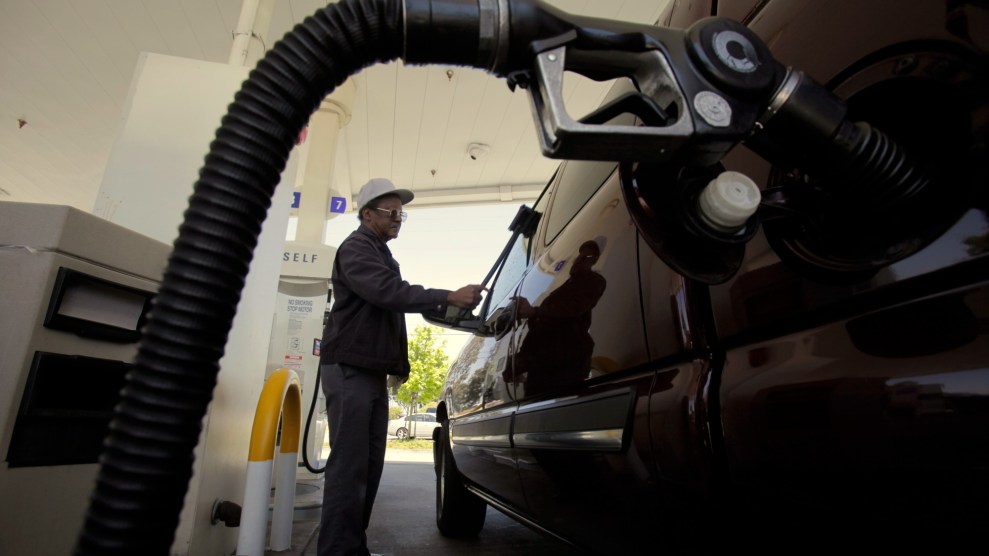 As Joe Biden ratchets up the pressure on Russia by banning imports of its oil, American drivers grumble about rising gasoline prices, and the oil and gas industry clamors for more land to drill, a more fundamental demand has emerged—for the US to decisively cut its umbilical reliance upon fossil fuels.

Environmental groups and progressive Democrats are aiming to build upon the backlash to Russia’s invasion of Ukraine by ending the era of fossil fuel dependency and help address the unfolding climate crisis.

“This moment is a clarion call for the urgent need to transition to domestic clean energy so that we are never again complicit in fossil-fueled conflict,” said Ed Markey (D-Mass.), the senator who helped devise the Green New Deal platform.

“This moment is a clarion call for the urgent need to transition to domestic clean energy so that we are never again complicit in fossil-fueled conflict.”

The climate measures in Biden’s moribund Build Back Better legislation may now be resurrected, Democrats hope, with several of the party’s senators unveiling a flurry of bills to ensure renewable energy replaces the banned Russian oil imports and to tax oil companies enjoying a financial bonanza from oil prices that have soared due to the crisis in Ukraine.

More than 200 environmental and indigenous organizations have signed a letter demanding he use the Defense Production Act, normally used in times of war to compel companies to churn out tanks, aircraft, and other weapons, to force businesses to produce solar panels, wind turbines, heat pumps, and other climate-friendly material.

“Biden is in the ideal position to declare a national climate emergency and use his existing emergency powers to push the accelerator on renewable energy,” said Jean Su, senior attorney at the Center for Biological Diversity, one of the signatories.

“There’s a war with a fossil fuel oligarch and we are in a climate war, so we need to attack this on a wartime footing. The best thing we can do is defend the world from the violence of fossil fuel combustion. This is the defining moment of the Biden presidency and of the climate emergency itself.”

Biden has said that the fallout from the Ukraine war “should motivate to us accelerate to a transition of clean energy”. But he has also jarringly boasted that more oil is now being pumped in the US than during Donald Trump’s tenure, in order to counter accusations that not enough is being done to tamp down the spiraling cost of gasoline for drivers.

The conflict has underscored the volatile grip fossil fuels continue to have over geopolitics and people’s everyday lives, causing a reckoning for Europe, which relies upon Russia for 40% of its gas supply, and dealing painful gasoline price increases to low-income people in car-dependent America.

The burning of fossil fuels also directly kills nearly 9 million people around the world each year from toxic air pollution and is the primary driver of global heating that scientists warn will acutely harm half of the planet’s population. The International Energy Agency has warned no new fossil fuel projects can commence if the world is to avoid disastrous climate change.

“We live in a world where a product we rely on to function is subject to the actions of dictators and a cartel,” said Robbie Orvis, senior director of energy policy at Energy Innovation. “We have to decide if we want to continue that way.”

Freeing the US from its ravenous appetite for oil, gas, and coal will be a sizable task. Nearly 80% of US energy consumption comes from fossil fuels, with the country burning through around 20m barrels of petroleum, about a fifth of the global total, every day. The US is the world’s leading crude oil producer and imports a large volume of oil – usually heavier, thicker product than it can pump at home – from other countries. Four million barrels of oil flow each day from Canada alone.

Weaning the US from this diet of hydrocarbons will require the passage of half a trillion dollars in clean energy tax credits proposed in the Build Back Better bill, according to analysts, which would bring the US within striking distance of cutting its greenhouse gas emissions in half this decade.

“The clean energy tax credits and other provisions would really catalyze the industry and achieve significant reductions,” said Orvis, who has calculated that the support for wind, solar and electric cars would slash US oil demand, make 70% of the electricity grid run on clean energy and ensure that about half of vehicle sales are electric by 2030. Wind and solar grew at the fastest rate in US history last year.

The ailing coal industry could be phased out “fairly easily” within a decade, according to Orvis, although further federal, state, and city standards and incentives are required to cut pollution from buildings, manufacturing, and the remaining car fleet, promote energy efficiency and to install heat pumps in place of gas-fired furnaces.

“The sooner we start that transition will determine how fast we can go,” Orvis said. “Every day we don’t start the transition we are subject to the price swings from fossil fuels that we are clearly subject to now.”

The oil and gas industry, and its allies in Congress, has a different framing of the concept of “energy independence,” accusing Biden of stymying a vast increase in drilling on public land even as it sits on millions of acres of unused permits in order to reap the benefits of an oil price that has hit near record highs.

“The first, immediate action item is to increase our domestic oil and gas production on both federal and non-federal lands,” said Joe Manchin, the centrist Democrat and Senate energy committee chairman who has accused Vladimir Putin of using energy as a “weapon” against the US and whose opposition has so far blocked the passage of Build Back Better.

Experts say an increase in domestic drilling would take months, or even years, to influence gasoline prices that are determined by the vagaries of a global oil market. “The idea of energy independence is sort of ridiculous – oil is a global commodity and we export a lot of oil and gas ourselves,” said Michael Webber, an expert in energy resources at the University of Texas.

“What we are seeing is one more chapter of fossil fuels’ impact on world politics,” he added. “What’s going on in Ukraine is partly a resource war. It’s not like we will have zero problems with renewables—you still need minerals for renewable energy infrastructure. But we’d have far less than we have now.”