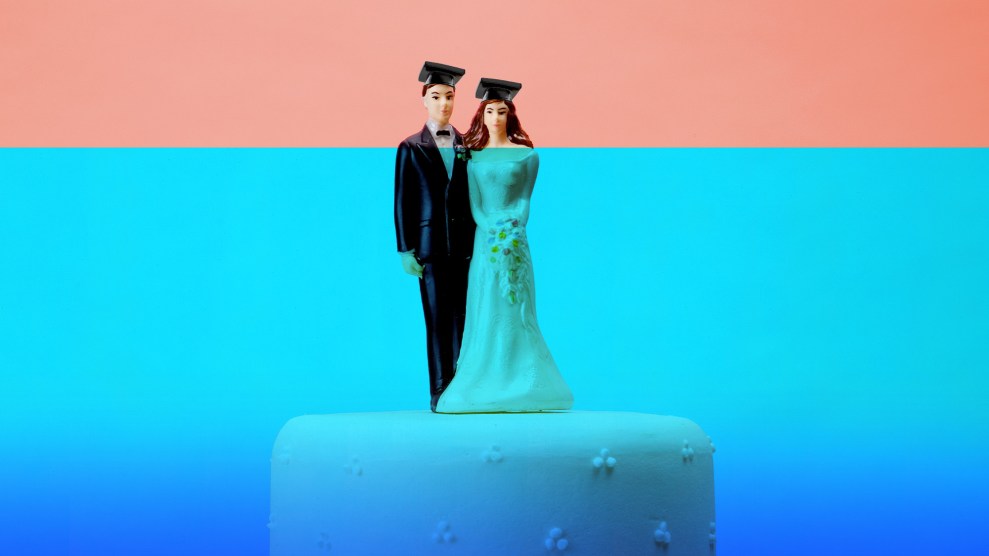 When the Biden administration made it easier last year for Americans doing public service work to have their student loans forgiven, thousands of borrowers saw their debts reduced or eliminated altogether. But some were left out.

One group of debtors that fell through the cracks: couples who used a government program to consolidate their loans after getting married. The plight of borrowers with spousal consolidation loans hasn’t gotten much media coverage, and new numbers obtained through a Freedom of Information request suggest why. According to FOIAed material shared with Mother Jones by the Student Borrower Protection Center, in total, there are only 776 borrowers with spousal consolidation loans that are still being repaid or are expected to be repaid in the future. That’s just a tiny fraction of the 45 million people with student debt in the United States, but their situations can be quite dire.

“This was a very unique product that was created, and the fact that you can’t separate them—I’m not aware of any other product that is designed in this way,” says Persis Yu, policy director at the Student Borrower Protection Center. “They stopped making these loans back in 2006, so these are really old loans at this point.”

“Divorce does not legally impact the liability on these loans—they were written specifically to say that both borrowers will remain on the hook for these loans,” Yu notes. “That requires the former spouses to work together in order to make payments.” This could put borrowers in physical danger. “Domestic violence is a really big problem with these loans,” Yu notes. “These loans actually can put survivors of domestic violence in a very precarious situation.”

But even when marriages don’t involve abuse and don’t end in divorce, spousal consolidation loans can still cause major financial issues.

Chris Alldredge, who created a Facebook group for borrowers with these loans, says that his and his wife’s consolidated loan prevented them from having their debt canceled through the public service loan forgiveness program.

For borrowers like Chris and his wife, whose loans were consolidated in 2005 before the forgiveness program was created in 2007, the issue took on a new urgency in 2021 when the Biden administration announced its temporary student debt reform. The new waiver made it easier for borrowers with some types of loans to pursue forgiveness. But the waiver didn’t do much to address spousal consolidation loans.

So after browsing a Facebook group about loan forgiveness that didn’t have much information related to his specific situation, Chris decided to create a new group. At first, Chris expected his new Facebook group would be small. Prior to 2021, he hadn’t actually known anyone else who had a spousal consolidation loan. “We’re a disparate constellation of stories just strewn across the internet,” he says. “It felt really lonely to not have anyone to talk about it.”

But connecting on social media with other people in a similar situation has helped Chris feel less alone. “It was amazing to know that there were other people out there that were sharing the same story,” Chris says. “My wife and I, we had more or less just given up for years. We were just like, ‘We’re going to die with this. This is what it’s going to be, this is our reality, we’re just going to carry this loan to our graves with us.’”

Now, Chris has pinned his hopes on Congress, where lawmakers have introduced legislation that would allow borrowers with these loans to separate them. That would make it easier for Chris to have his debt forgiven.

“My short term plans are to figure out how to continue to pull people into our group and to try to get the Joint Consolidation Loan Separation Act pushed through Congress and Senate,” he says. “That is the only way that we can be assured that we can move forward.”