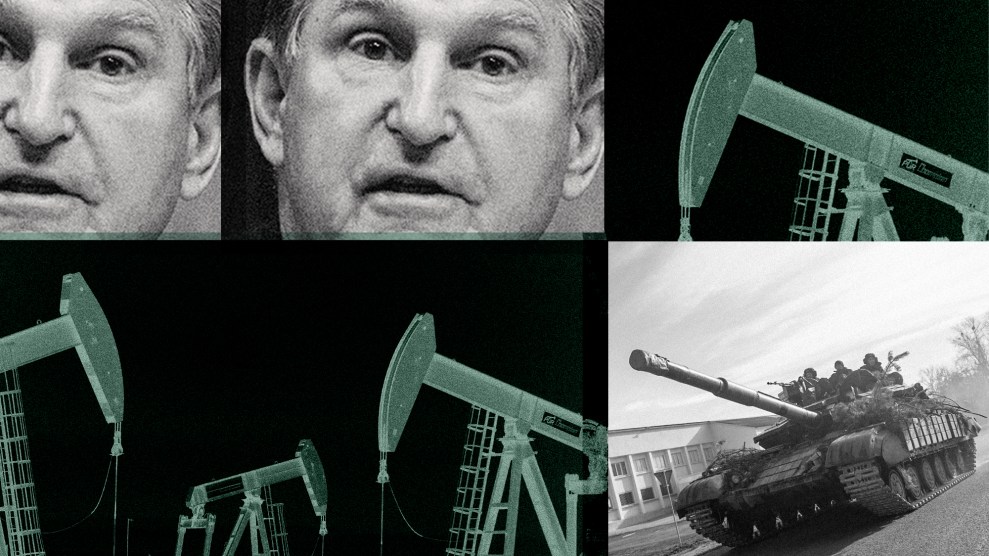 On Monday, the United Nations’ climate change assessment body, the IPCC, released a landmark report finding that 150 years of unchecked fossil fuel burning had left the planet with a “brief and rapidly closing window of opportunity to secure a liveable and sustainable future for all.”

A day before, speaking at a virtual meeting of UN climate delegates from her home in embattled Kyiv, Ukraine’s representative, Svitlana Krakovska, related the report’s finding to Russia’s attack on her homeland: “Human-induced climate change and the war on Ukraine have the same roots: fossil fuels, and our dependence on them.” She added: “We will not surrender in Ukraine…And we hope the world will not surrender in building a climate-resilient future.”

But in the United States, politicians and fossil fuel industry lobbyists are taking a rather different lesson from the conflict. Russia is basically a petro state, heavily reliant on oil and gas exports to Europe, much of it flowing in pipelines through Ukraine. Europe currently relies on Russia for about a third of its natural gas consumption, mostly to heat homes during the winter. With Russia emerging as a global pariah for its ruthless assault, the world should reject that country’s oil and instead encourage US producers to drill, baby, drill!

The American Petroleum Institute, the industry’s main trade group, started making its appeal on February 23, a day before Russia launched its siege:

As crisis looms in Ukraine, U.S. energy leadership is more important than ever. Here are four things the @WhiteHouse can do right now to ensure energy security at home and abroad. pic.twitter.com/oGEucyhCiE

The institute went on to call for measures that had long been at the top of its policy wish list: that the Biden administration reverse restrictions on permits for fossil fuel production on federal land; reopen offshore drilling; “accelerate energy infrastructure permitting”; and “reduce legal and regulatory uncertainty” (translation: deregulate us, please). The infrastructure bit is likely a reference to projects like the stalled Keystone XL pipeline, designed to move oil from Canada’s tar sands to the Gulf of Mexico for processing and export, and ports that can send liquified natural gas fracked in the United States to overseas markets. A day later, API reiterated these demands in a letter to US Department of Energy Secretary Jennifer Granholm.

API’s @mj_sommers sent a letter to @SecGranholm @ENERGY outlining a list of concrete policy solutions that the administration could immediately implement to ensure long-term American energy leadership and security. Full letter below: pic.twitter.com/q6z8ElKXzM

Joe Manchin calls on US for ramped up oil production in wake of Russia-Ukraine war https://t.co/B0AWJGDeSR pic.twitter.com/WBWnkHdgiQ

A March 2 letter to President Biden, signed by every Republican member of the Senate Committee on Energy and Natural Resources, sums up the emerging GOP view of how the United States should respond to the Ukraine situation. The senators rebuked the administration for nixing the Keystone pipeline and accused its energy policies of leaving the United States and its allies “vulnerable to the malicious maneuverings of Vladimir Putin.” Having vented their spleen, they went on to deliver a familiar set of demands: more pipeline and offshore-drilling permits; more leases on public land; less regulation. “Mr. President, America is the world’s energy superpower,” they concluded. “It is time we started acting like it again.”

In a March 1 blog post, US Chamber of Commerce exec Martin Dubin rolled out a similar vision for responding to Russian aggression, though he added an important caveat: “The actions we recommend will not change Europe’s desperate energy security circumstances overnight.” That’s an understatement, because finding and tapping new wells and building shipping terminals that can export natural gas can take years. Even so, Dubin insisted, deregulation to spur more drilling is “critical to addressing energy security vulnerabilities over the coming decade, and will send a much-needed signal to markets and potential investors that the United States is serious about supplying itself and its allies with the energy resources necessary to weaken Russia’s influence.”

But here’s the thing: The exact same argument about timing could be made for a different response to Russia’s aggression, one much more in line with Krakovska’s appeal at the UN climate panel meeting. If building out new oil infrastructure will take years, why not instead use the crisis as a spur to build out green energy in the United States and Europe?

Take Germany. As Noah J. Gordon, an associate fellow at the climate-focused think tank Adelphi specializing in European energy markets, noted in an interview with Slate’s Nitish Pahwa, the great bulk of Russian gas flowing into Germany goes into home heating. Instead of replacing it with fracked US gas, Germany could build out green energy sources like wind and solar to power its grid and ramp up production and installation of electric-powered heat pumps which heat homes as effectively as gas-powered furnaces while using less overall energy.

Gordon called for a “wartime mobilization” to build heat pumps and weatherize buildings to make them more energy efficient. It’s true that Germany’s electricity grid is still powered by some dirty sources, including some Russian gas. And that the nation’s recent move away from nuclear power has nudged up the grid’s reliance on natural gas. But “at least with heat pumps and efficiency, you’re not locking in future fossil fuel use,” Gordon told Slate. Indeed, the contribution of wind and solar power to Germany’s energy grid has more than doubled since 2011. And as these clean power sources keep growing, heat pumps get more and more clean. Gas-powered furnaces, by contrast, are forever wedded to gas.

The United States could use the Ukraine crisis to accelerate the greening of our own electric grid.

Likewise, the United States could use the Ukraine crisis to accelerate the greening of our own electric grid, while also incentivizing the switch to heat pumps. These days, Sen. Manchin is terribly concerned that Russia’s access to global energy markets is financing its brutal imperial machinations. But just last November, he killed a program that could have largely weaned the US power grid off its reliance on natural gas and coal.

Big Oil’s overt use of the crisis as a lever to goad the public and the US government to embrace more drilling in an era of fast-moving climate chaos made me think of Naomi Klein’s landmark 2007 book, The Shock Doctrine. The book showed how powerful industries tend to uses the public’s disorientation following big collective shocks—wars, terrorist attacks, natural disasters—to push policies that reinforce an unjust status quo. The aptness of that frame for the current moment isn’t lost on Klein herself.

As Russia wages a brutal war at Europe’s edge, the prospect for the kind of global action on climate change called for by the IPPC could fade, with priorities shifting from investment in a clean energy future to a stocking up of weapons. Since the invasion, Germany has not announced any mobilization to manufacture and install heat pumps, but it has vowed to ramp up military spending and build new facilities to import non-Russian gas.

If the US oil industry gets its way, Vladimir Putin’s mad gambit could serve to further entrench fossil fuels. And as Svitlana Krakovska’s statement at the IPCC meeting suggests, maybe that’s part of his intention. I’m haunted by a line from The Shock Doctrine: “Extreme violence has a way of preventing us from seeing the interests it serves.”