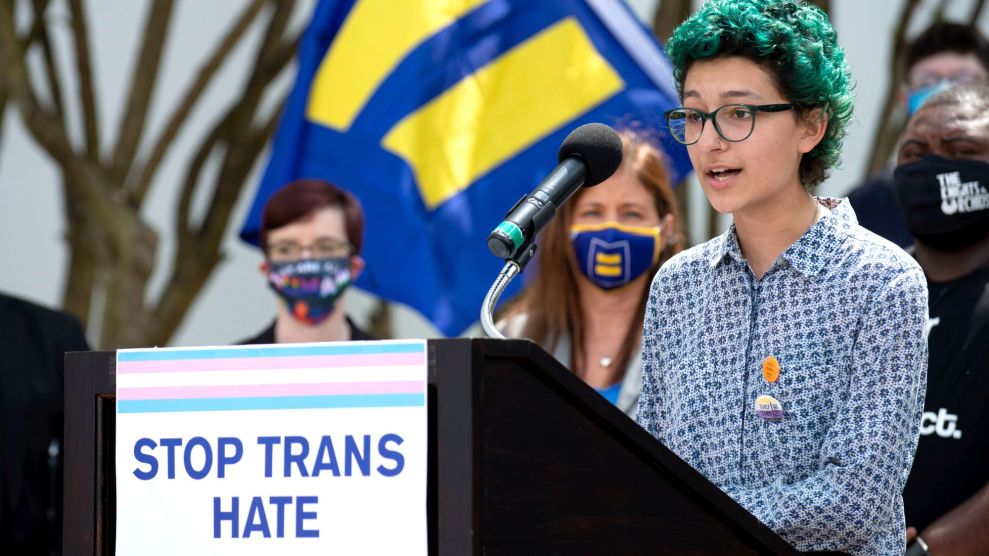 On Thursday, Alabama legislators approved one of the most draconian anti-trans bills in the country seeking to criminalize gender-affirming care for transgender youth.

The bill comes amid a wave of anti-trans legislation that has swept conservative states from Arizona to Texas, prompting widespread alarm among medical experts and the transgender community. In February, Texas Gov. Greg Abbott urged the Department of Family and Protective Services to reclassify gender-affirming care as child abuse, leading it to initiate investigations into parents with transgender children. (The directive was later temporarily enjoined by a state court.)

But even at a time of rising anti-trans sentiment, the Alabama bill stands out as extreme. If Alabama Republican Gov. Kay Ivey signs it into law, medical practitioners who provide hormone treatment, puberty blockers, and gender reassignment surgery to minors would be threatened with a felony charge carrying up to a decade in prison.

The bill was one among a bevy that the Alabama legislature approved yesterday, designed to punish queer youth and the people who support them. Alabama lawmakers also voted to advance legislation that forces trans students to use locker rooms and restrooms for the sex they were assigned at birth. An amendment to that bill added language that resembles Florida’s “Don’t Say Gay” law, restricting discussions of gender and sexuality from kindergarten through fifth grade.

My colleague Samantha Michaels spoke to David Fuller, a Republican-voting veteran police sergeant in Gadsden, Alabama, for a heart-wrenching story we published last month. Fuller’s trans daughter came out when she was 16. He told Michaels:

I mean, if I think back to before the doctors, I’ve got pictures of her from the year before she came out, and you can see the look on her face. Like she’s not there. As her health care kicked in and she got more confident about who she was, she became more outgoing, making friends. She never used to talk to people hardly at all, unless she really, really knew them. Now you get her started and you can’t get it to stop. She started her own online group on Discord for kids like her, so they’d have some place to talk. She’s trying to write a book. Before she never wanted to be in crowds, and last night we went to a Billie Eilish concert together.

Fuller also spoke about the unexpected support he received even from his fellow police officers, many of whom held hyper-conservative views and had previously made comments disparaging trans people.

A couple of the guys surprised me. One was ultra-religious and tends to have bigoted things to say. But they messaged me behind the scenes and said, “If anybody bothers you about this, you let us know. We got your back.” It was like, Okay, now it’s in my room. That’s my buddy Dave. That’s my sergeant, and he’s a real person. He knew my family already. He knew what I went through when my wife got sicker and sicker and died. He saw me trying to raise the kids alone, going through the anguish of that. And so we were already real people before they found out about this.

However, with the legislation on the verge of being signed into law, Fuller may soon be in a position where he’ll be forced to arrest the doctors who helped save his daughter.

Say they put a warrant on one of my doctors, the ones who saved my daughter’s life? And say that doctor gets stopped in our town, cutting through? Technically, I’d be assigned to put them in handcuffs and bring them to jail. I don’t think that’s likely to happen. But my big fear is the fact that they would be designated as criminals. To imagine these people being arrested for everything they’ve done for my family makes me cringe.