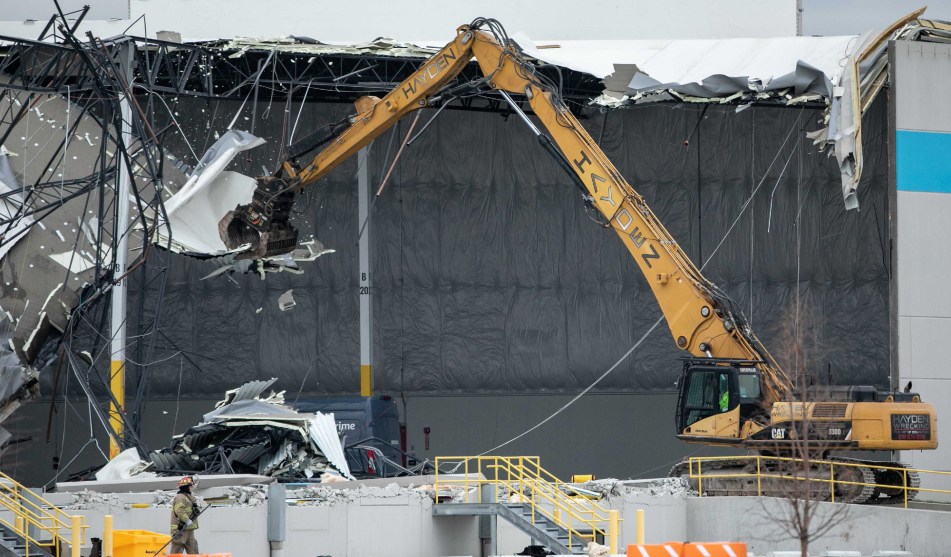 Crews use an excavator to pull down pieces of a damaged roof during search and rescue operations at the Amazon distribution center in Eadwardsville, Illinois, on Saturday, Dec. 11, 2021, after overnight severe storms caused the building to partially collapse. Daniel Shular/St. Louis Post-Dispatch/TNS via ZUMA Press Wire

The Occupational Safety and Health Administration will not be issuing any fines to Amazon despite an investigation finding multiple safety risks at the company’s Edwardsville, Illinois warehouse facility where, late last year, a Category 3 tornado hit, killing six people.

The announcement from the nation’s federal worker safety watchdog came on Tuesday. The investigation into the disaster showed that Amazon complied with minimal federal storm shelter guidelines despite some unsafe conditions. In part, this is because the bar is incredibly low. As I reported last week, OSHA does not have required standards for severe weather emergency plans. Instead those plans are recommended under the Occupational and Safety Health Act’s General Duty Clause. Without that firm requirement, OSHA leaves profit-driven companies to determine what is considered “safe enough” for their employees and the contractors that work with them.

There were numerous problems the day of the storm. OSHA’s investigation found that while the facility did have a megaphone meant to allow for managers to “[a]ctivate the audible warning method to alert personnel about the site emergency,” it was locked up and inaccessible the night of the tornado. Management, instead, walked through the 1.1 million square-foot warehouse facility telling employees to shelter in the restrooms. Only the northern restroom facility was a designated tornado shelter. Some employees did not know that and sheltered in other, less safe, restrooms. All of the workers who died were reportedly sheltering in the southern restroom. Five of the workers killed on December 10th were independent contracted drivers who did not know the correct shelter location.

While Amazon had a written emergency action plan for severe storms, it did not include specific plans for events that would be likely in Illinois. For instance, it included information about hurricanes but not tornadoes.

The investigation also revealed that Amazon kept workers pushing the line until the last possible moment. Managers began issuing employees towards shelter about ten minutes before the tornado struck, despite warnings of severe tornadoes up to 36 hours before. In lawsuits against the Edwardsville facility, plaintiffs representing some of the deceased allege that Amazon refused to alter schedules around the storm and that workers were told they would be fired if they did not come in or stay for their scheduled shift. Texts to family from workers allege that they were being threatened with termination. “Amazon won’t let us leave,” one text read.

“These tragic deaths have sparked discussions nationwide on the vital need for comprehensive workplace emergency plans,” said OSHA’s Regional Administrator William Donovan in a public media release about the investigation. Amazon spokesperson Kelly Nantel said in a statement that Amazon is already doing more for emergency preparedness plans and will “carefully consider” OSHA’s recommendations. ”We believe our team did the right thing, moving people to shelter as soon as the warning was issued,” the company said in a statement. “Our buildings—including the Edwardsville delivery station—have emergency plans that identify exit routes and shelter areas.”

The Seattle-based mega-retailer is only the latest in a string of corporations and employers who receive no or minimal fines when employees die on their watch. Scientists say that climate change is making many storms worse or less predictable. But what is certainly becoming clearer and clearer is that we cannot depend on corporations to make responsible decisions when it comes to the safety of their workers in heat, hurricanes, wildfires, and tornadoes. Without clear federal regulations and accountability, corporations will continue to get ahead on profits while leaving their employees vulnerable.