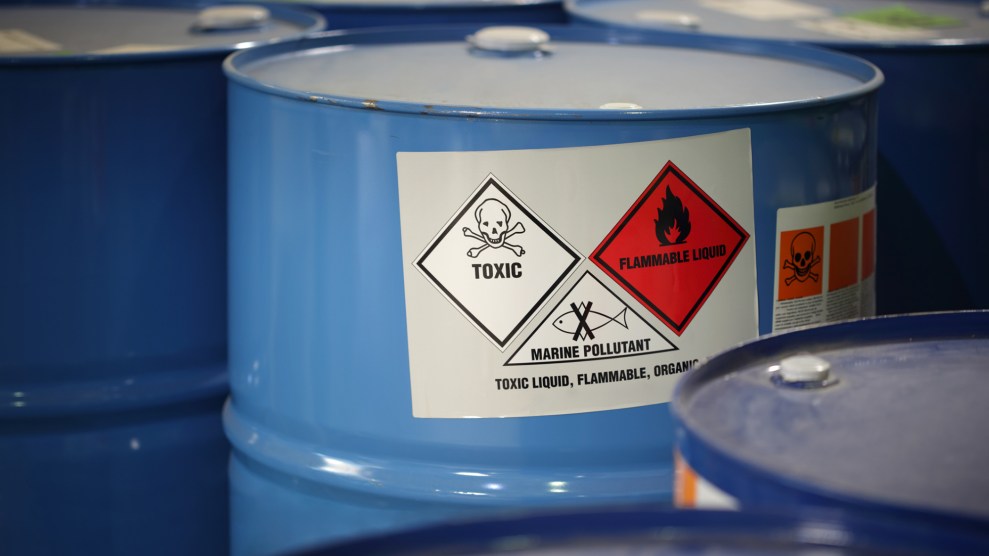 Thousands of potentially harmful chemicals could soon be prohibited in Europe under new restrictions, which campaigners have hailed as the strongest yet.

Earlier this year, scientists said chemical pollution had crossed a “planetary boundary” beyond which lies the breakdown of global ecosystems. The synthetic blight is thought to be pushing whale species to the brink of extinction and has been blamed for declining human fertility rates, and 2 million deaths a year.

The EU’s “restrictions roadmap” published on Monday was conceived as a first step to transforming this picture by using existing laws to outlaw toxic substances linked to cancers, hormonal disruption, reprotoxic disorders, obesity, diabetes, and other illnesses.

Industry groups say that up to 12,000 substances could ultimately fall within the scope of the new proposal, which would constitute the world’s “largest ever ban of toxic chemicals,” according to the European Environmental Bureau.

“The EU is planning the boldest detox we have ever seen. Petrochemical industry lobbyists are shocked at what is now on the table.”

Tatiana Santos, the bureau’s chemicals policy manager, said: “EU chemical controls are usually achingly slow but the EU is planning the boldest detox we have ever seen. Petrochemical industry lobbyists are shocked at what is now on the table. It promises to improve the safety of almost all manufactured products and rapidly lower the chemical intensity of our schools, homes and workplaces.”

The plan focuses on entire classes of chemical substances for the first time as a rule, including all flame retardants, bisphenols, PVC plastics, toxic chemicals in single-use diapers, and PFAS, which are also known as “forever chemicals” because of the time they take to naturally degrade.

All of these will be put on a “rolling list” of substances to be considered for restriction by the European Chemicals Agency. The list will be regularly reviewed and updated, before a significant revision to the EU’s cornerstone Reach regulation for chemicals slated for 2027.

But industry groups argue that the scheme’s focus on groups of chemicals could affect street products such as sun creams and perfumes, which may use a host of synthetic substances.

“A lot of different ingredients fall under the skin sensitizer group so a wide range of cosmetic products would potentially be affected,” said John Chave, the director general of Cosmetics Europe, a trade body. “The effect on consumers would be that there would potentially be less variety, less choice, and less functional effectiveness for cosmetic products with no gains for safety whatsoever because the ingredients were safe in the first place.”

Beyond cosmetics, affected products could include paints, cleaning products, adhesives, lubricants, and pesticides.

Europe’s Reach system is already the world’s most extensive chemical register, and new bans could hit more than a quarter of the industry’s annual turnover of around $536 billion per year, according to a study by the trade group Cefic. “Some of the restrictions may have a significant impact on the industry and value chains,” said Heather Kiggins, a Cefic spokeswoman.

The industry argues for a more narrowly targeted approach to restrictions, and for incentives and import controls to help develop safer alternative products.

Nevertheless, the European Chemicals Agency favors dealing with chemicals in groups because chemical firms have previously avoided bans on individual chemicals by tweaking their chemical composition to create sister substances that may also be dangerous, but which then require lengthy legislative battles to regulate.

The industry tactic, known as “regrettable substitution,” has been criticized by environmental groups for allowing the replacement of substances such as the endocrine-disrupting bisphenol A with other bisphenols.

Chemical firms have sidestepped bans on individual molecules by tweaking the structures slightly, a tactic known as “regrettable substitution.”

Santos described it as “a cynical and irresponsible tactic by the chemical industry to replace the most harmful banned chemicals with similarly harmful ones not yet on the regulatory radar. We’ve witnessed a decades-long pattern of regrettable substitution to avoid regulation.”

More than 190 million synthetic chemicals are registered globally, and a new industrial chemical is created every 1.4 seconds on average. The UN says that it expects the industry’s global value of more than $5 trillion to double by 2030 and to quadruple by 2060.

The EU’s environment commissioner, Virginijus Sinkevičius, said the new restrictions “aim to reduce exposure of people and the environment to some of the most harmful chemicals, addressing a wide range of their uses—industrial, professional, and in consumer products.”

The EU’s internal markets commissioner, Thierry Breton, said achieving a toxic-free environment would demand transparency and visibility from the commission. “The restrictions roadmap provides such visibility, and allows companies and other stakeholders to be better prepared for potential upcoming restrictions,” he said.

Millions of metric tons of chemical substances were used by industrial giants such as BASF, Bayer, Dow Chemicals and ExxonMobil without completing safety checks between 2014 and 2019, according to research by German environmentalists.