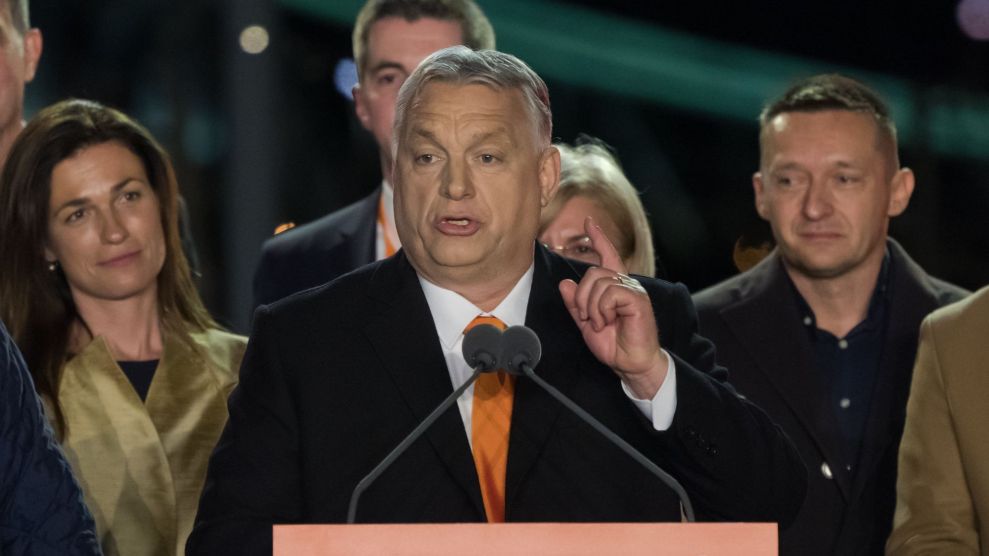 Last night, Hungary’s authoritarian leader Viktor Orbán took the stage to crow about his fourth consecutive election as prime minister (and fifth election victory in total) and condemn the “overwhelming” list of people who had hoped for his defeat. In this list, he included: “The left at home, the international left all around, the Brussels bureaucrats, the [George] Soros empire with all its money, the international mainstream media, and in the end, even the Ukrainian president.”

It wasn’t a surprise that Orbán, an “illiberal” authoritarian and erstwhile Putin ally, would name among his enemies Volodymyr Zelenskyy, a leader who has become an international symbol of the fight for liberal democratic values. But Orban’s gloating remarks, delivered at a time when Ukraine was accusing Russia of massacring civilians in the town of Bucha, still made for a shocking and grim spectacle. Indeed, Orbán’s decisive victory over a united opposition led by provincial mayor Peter Marki-Zay illustrates that the Putin friendly illiberal right in Europe and the US, which seemed to falter after the Russian leader’s broadly unpopular invasion of Ukraine, has once again found its footing.

When Russia invaded Ukraine, Orbán played down his friendly relationship with Putin and extended a welcome to millions of Ukrainian refugees—a startling reversal for one of the most anti-migrant governments in Europe. However, in recent weeks, Orbán has managed to spin anti-anti-Putinism into a viable political strategy, urging neutrality in the conflict and warning Hungarians that Marki-Zay’s promise to mend ties with the European Union would lead Hungary into war with Russia.

Marki-Zay, a conservative Catholic mayor from a mid-sized provincial town leading a united front of opposition parties, was widely viewed as the last best hope to dethrone Orbán, who has dominated Hungary’s political landscape through the post-communist era. Under Orbán’s rule, Hungary has become what the prime minister himself has approvingly described as an “illiberal democracy,” combining a hostility toward diversity, multiculturalism, and LGBTQ rights with one-party control over the state apparatus and a fervent embrace of nationalism and “Christian” values. As András Bozóki, professor at the Department of Political Science at the Central European University, told my colleague Marianne Szegedy-Maszak:

(The Hungarian state) is not representing public interests, but the interests of power, the friends and associates of Orbán, the political and economic entrepreneurs. This is not a classic breakdown of democracy, like revolution or a coup d’état. In this case, a democratically elected leader is hollowing out democracy from the inside through an incremental process, so it’s difficult to identify the definitive step. He got the political power in the first election. In the second term, he got the economic power, and he centralized his power by the end of the second term. And by that time, the European Union noticed the wrong direction, and also what was happening in the Polish election, and the Orbán phenomenon became a European phenomenon, not just an isolated Hungarian case. His dishonest, opportunistic political approach infected Slovenia, Serbia, Bulgaria, Macedonia, Poland, partly even Italy. Then came the election of Donald Trump and Brexit, and all of these changes of 2016 were very favorable for the new autocrats. It is like the complete reversal of 1989 and democratization. Now it is a de-democratization, a global democratic recession. Suddenly Orbán gained global significance as the pioneer of this whole process.

Orbán and his political party Fidesz have pioneered a form of what political scientists have deemed “competitive authoritarianism“—a political system that may allow elections but heavily weights them in the ruling party’s favor through one-sided electoral reforms, state-sponsored propaganda, and media control. Under these conditions, the united opposition faced a steep uphill fight. Throughout the entire election campaign, Marki-Zay received only five minutes of airtime on state television and scathing coverage from major media outlets, almost all of which are owned by Orbán allies. In the lead-up to the vote, Orbán also modified Hungary’s election laws to make his own victory more likely and whipped up hostility toward his two favorite scapegoats: Hungarian billionaire George Soros (whose scholarship Orbán once received) and queer people. Politico described Soros as “Orbán’s political godfather” but “now a sworn enemy.”

As Bozóki noted, Orbán’s methods have also captivated conservative movements abroad. In recent years, the American right, in particular, has increasingly looked to Hungary—a country with only 3 percent of the U.S.’s population and 0.7 percent of its GDP—as a potential model to emulate both in its strategy for returning to power and governing once it does. Right-wing intellectuals Rod Dreher and Sohrab Ahmari have praised Orbán’s pro-family, anti-migrant policies and his fervent opposition to LGBTQ rights. In August 2021, Tucker Carlson broadcast his show from Budapest for a week, praising Hungary as a “small country with a lot of lessons for the rest of us.” Following the election, Dreher congratulated Orbán for his victory and urged Florida Governor Ron DeSantis to look to him for inspiration.

Congratulations to Viktor Orban on winning a victory well deserved! He’s leading Hungary the right way and we need this in America.

Before his victory, Orbán also received a glowing endorsement from Donald Trump, who praised him as a “strong leader” who has “done a powerful and wonderful job in protecting Hungary, stopping illegal immigration, creating jobs, trade, and should be allowed to continue to do so in the upcoming election.”