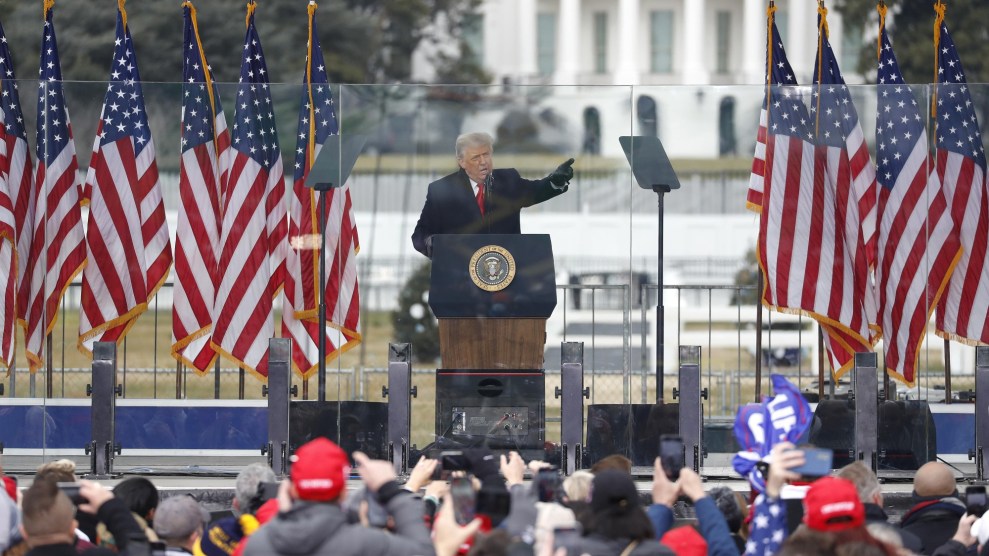 The House panel investigating the January 6 attack on the Capitol may not send the Justice Department criminal referrals against former President Donald Trump and some of his advisers, despite strong evidence they broke the law, members of the committee say.

“We have not made a decision on referrals on the committee,” Liz Cheney (R-Wyo.), the committee’s vice chair, said Sunday on CNN’s State of the Union, while calling it “absolutely clear” that Trump and people around him knew that their efforts to help him retain power were illegal. “What we have seen is a massive and well organized and well-planned effort that used multiple tools to try to overturn the election,” Cheney said.

The New York Times reported Sunday that committee is divided over sending the Justice Department a referral of Trump. Some committee members and aides worry doing so would contribute to the appearance that any subsequent DOJ prosecution is politicized, according to the Times.

In a tweet Sunday, Rep. Adam Kinzinger (R-Ill.) argued committee members are not at odds over a Trump referral. “There is no split,” Kinzinger said.

An important factor in the committee’s deliberations is that criminal referrals by Congress have no official influence on federal prosecutors. They are largely symbolic. The committee still plans to issue a report that is expected to include evidence that Trump and some of his advisers broke the law. The Justice Department will weigh that evidence regardless of whether the panel explicitly advocates prosecuting Trump. “Maybe we will, maybe we won’t,” Rep. Zoe Lofgren (D-Calif.) told the Times, regarding a Trump referral. “It doesn’t have a legal impact.”

Lofgren cited a recent ruling by David Carter, a federal district court judge in California, who said that it was “more likely than not” that Trump and John Eastman, a lawyer who advised Trump, had committed multiple crimes by plotting to obstruct a joint session of Congress on January 6 to certify the election results. Carter’s finding came in an order compelling Eastman to comply with a subpoena for emails he wrote. But the ruling also serves as roadmap for charging Trump. And committee members believe it will carry more weight with Attorney General Merrick Garland, a former federal appeals court judge, than the panel’s own referral, the Times reported.

The Justice Department’s January 6 investigation has reportedly expanded, with a grand jury empaneled to help investigate Trump advisers and preparations for the rally that preceded the riot, according to multiple reports. On Friday, Ali Alexander, the founder of a Stop the Steal group who helped organize events on January 6, said he was complying with a grand jury subpoena that he received as part of that expanded probe.

The department’s sprawling investigation into the attack also got a breakthrough Friday when Charles Donohoe, a Proud Boys leader from North Carolina, pleaded guilty to conspiracy charges related to January 6. In a court filing connected to his plea, prosecutors said Donohoe is prepared to testify that the Proud Boys planned on January 6 “to obstruct, impede, or interfere with the certification of the Electoral College vote” and that they would “use of force and violence” carry out that plan.

Cheney noted that the Proud Boys and other far right groups that took part in the January 6 attack had begun planning in earnest after Trump on December 19 tweeted: “Big protest in D.C. on January 6th. Be there, will be wild!”

“They knew that they were going to attempt to use violence to try to stop the transfer of power,” Cheney told CNN. “That is the definition of an insurrection, and it is absolutely chilling.”