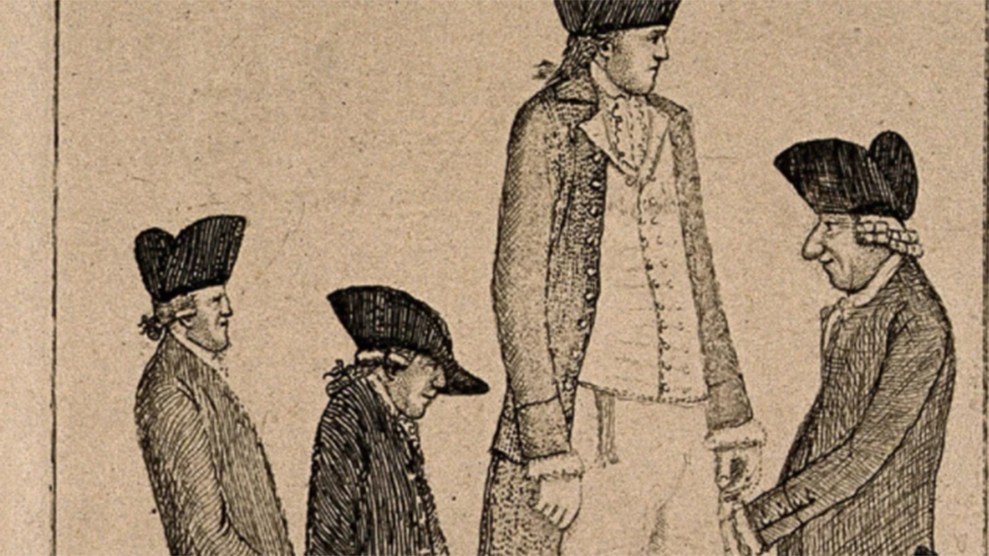 In the Spring of 1782, a 7-foot-7-inch man known as the Irish Giant came to London, advertising himself in the newspapers as a “modern colossus” and “the greatest natural curiosity ever seen.” For his 14 short months in London, the great lumbering giant enjoyed admiration and wealth. But he drank too much and kept his fortune of about $130,000 in today’s money on his person. Those riches were stolen from his pocket while he was at a bar near the junction of Charing Cross. He drank more and got sick. Soon he would die, either from the tumor that had sped his growth, alcohol, or tuberculosis.

When Charles Byrne was close to death, he grew scared that his corpse would be seized by surgeons and dissected. He was so worried, in fact, that he arranged for his friends to bury him at sea. Meanwhile, the brilliant Scottish-born surgeon John Hunter had assembled an important anatomical collection, including specimens he’d painstakingly prepared from his own dissections. Now he wanted Byrne. In 1783, when the Irishman died at just 22 years old, Hunter somehow got the body, likely bribing the undertaker or those charged to keep watch over the coffin.

For more than 200 years, the Hunterian Museum in London has shown off that monumental skeleton as the crown jewel of John Hunter’s collection. Blotches of discoloration are still visible in some places, such as on the ribs, perhaps the marks of the master dissector working in uncharacteristic haste out of fear of being discovered.

Recently, the gallery has been haunted by objections that Byrne is there against his dying wishes. A 2011 article in the BMJ called for the Irishman to be given a proper burial, provoking a flurry of replies on both sides of the issue. The Hunterian has been closed since 2017 for renovations, but it hasn’t agreed to stop showing the skeleton. Instead, the gallery released a non-committal statement in October 2020 that “an update on plans for all the displays in the new Museum will be issued in due course.”

Last January, Harvard launched a committee to determine the fate of some 22,000 sets of remains in its possession.

Clearly, museums are still grappling with what to do with specimens like Byrne’s. Last January, Harvard University launched a committee to decide how to handle the remains of an estimated 22,000 individuals in its possession, including 15 people of African ancestry who lived during American enslavement. The challenges associated with such reckonings are innumerable: the sheer volume of human remains in museum collections, the difficulty in figuring out where many of these remains came from, and, of course, the imperative to balance the educational value of the remains against the duty to respect the dead and their associated cultural groups.

Human remains, when obtained ethically from voluntary donors, can foster a meaningful legacy for the dead while allowing researchers and museum-goers to enrich their understanding of the human experience. The Mütter Museum in Philadelphia, for instance, displays the highly unusual skeleton of Harry Raymond Eastlack. Eastlack was born in Philadelphia in 1933 with an extremely rare condition that affects just one birth in 2 million. This condition, known as fibrodysplasia ossificans progressiva, or FOP for short, caused his body to develop sheets and strands of extra bone in reaction to minor injuries, slowly locking many of his joints into place.

When he was nearing his death, not yet 40, Eastlack told his sister Helene he wanted to give his body to science. After he died in 1973, his skeleton was transferred to the Mütter Museum. Each year Helene would come pay her respects. His remains have also been displayed at conferences for scientists and physicians studying FOP, helping them to better understand the condition.

In 1995, Carol Orzel, who was also affected by FOP, saw Eastlack’s skeleton while attending just such a conference. She decided to give her body as well, on the condition that her jewelry be displayed with her. Her skeleton now stands next to Eastlack’s. Their bodies express their support for science, and their desire for people to understand what they experienced—a testament to how meaningful such a gift can be when it’s voluntary.

Too often, however, museums have exhibited remains that were obtained unethically, without explaining their reasoning for doing so to visitors. These troubling displays are often connected to the harvesting of remains for medical study without consent, a practice that has often preyed on members of marginalized groups and that has proven stubbornly resistant to change.

In the United Kingdom of Charles Byrne’s day, anatomists were legally permitted to dissect executed criminals, under the Murder Act of 1752. This was later replaced by the Anatomy Act of 1832, which granted access instead to the unclaimed bodies of the friendless and destitute. When the supply of legally obtainable bodies ran out, anatomists in the U.K. turned to graverobbers, known at the time as resurrectionists.

As with so many of history’s medical misdeeds, the thefts were especially exploitative of the poor.

As with so many of history’s medical misdeeds, these thefts were especially exploitative of the poor. People with resources hired guards, bought intruder-proof coffins, or paid for their loved ones to be stored in so-called dead houses until they were sufficiently putrefied to be useless to anatomists and therefore safe for burial.

Taking human bodies without consent may sound like a long-gone ghoulish medieval relic, but it isn’t. New York State, for instance, only passed a law blocking the use of unclaimed cadavers by medical schools in 2016. And just last year it came to light that anthropologists at the University of Pennsylvania’s Penn Museum retained the bones that likely belonged to two children who had been killed in the 1985 police-bombing of a row house in Philadelphia, the culmination of a standoff with a Black organization called MOVE.

The bones had been given to Alan Mann, an anthropologist at the university, for forensic identification. But Mann and a colleague, Janet Monge, kept the remains for more than 30 years, studying them, using them for teaching, and passing them back and forth between the Penn Museum and Princeton, without ever having obtained consent from MOVE family members. At one point, Monge handled the bones on camera for an online course.

When the anthropologists’ possession of the bones came to light, the University of Pennsylvania apologized and the remains were returned to relatives for burial. Because the bones belonged to children of color who were the victims of excessive police force, their careless treatment struck many as especially egregious.

Talking about our history of racism is important, but it’s hard to see why we need ill-gotten skulls to do that.

The incident came just weeks after the Penn Museum said it would begin working to repatriate its collection of more than 800 skulls amassed by the 19th century physician Samuel G. Morton. Not only did Morton have few scruples about where he got the skulls—accepting them from nearly anyone and sending letters all over the world to acquire them—he also used them to try to advance his racist theories. Talking about our history of racism is important, but it’s hard to see why we need ill-gotten skulls to do that.

Thanks to vigorous advocacy from Indigenous groups, a federal law enacted in 1990 requires that the remains of Native Americans be returned. How much progress has been charted in the 30-plus years since, however, often seems to depend upon whom you ask: museum curators or the Indigenous groups, many of whom are still waiting for their ancestors’ remains. Some museums have committed themselves to returning the most ethically problematic remains—including those that are nonindigenous—for repatriation and burial, but actually completing this work can be slow and labor intensive.

Whenever museums do display human remains, they should incorporate discussions of consent and respect for the dead into their exhibits. If they can’t be transparent and explain their choices, then they should arrange for remains to be repatriated or otherwise given their final resting place in a respectful fashion—for instance, by burying them at the site of a monument that acknowledges the history of grave robbing. Pretending that there’s no issue isn’t acceptable.

We owe more to the people who—like Charles Byrne—did not ask, and almost certainly did not want, to spend an eternity on display.