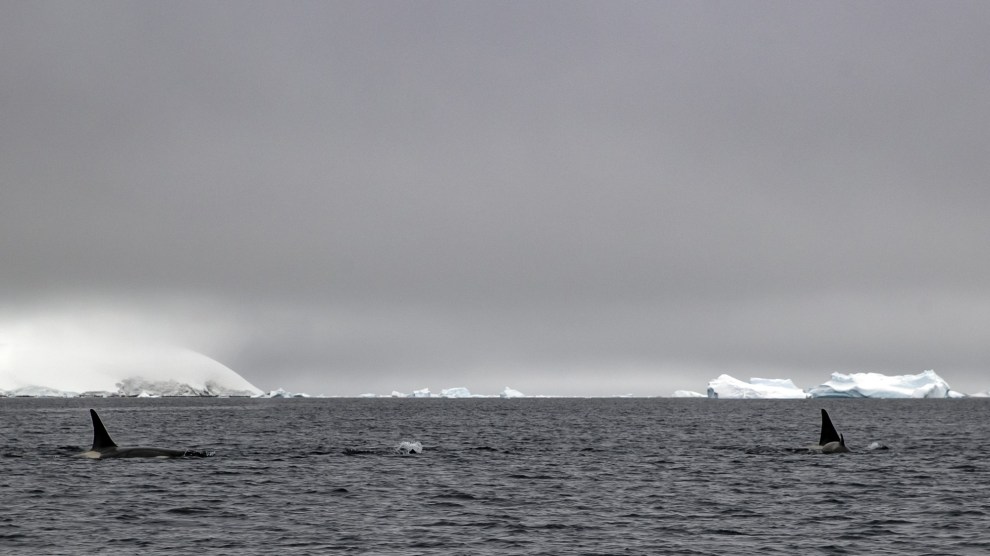 This story was originally published in Wired and is reproduced here as part of the Climate Desk collaboration.

Wander into nature and give a good shout, and only nearby birds, frogs, and squirrels will hear you. Although sensing noise is a critical survival strategy for land animals, it’s a somewhat limited warning system, as sounds—save for something like a massive volcanic explosion—don’t travel far in the air. They propagate much better through water, with undersea noises traveling hundreds or even thousands of miles, depending on the conditions.

Those conditions are rapidly transforming as the oceans warm. Changes in salinity, temperature, and pressure change how the sea sounds, with unknown impacts on the life forms that depend on that noise to survive. Whales talk amongst themselves and navigate with Earth’s tones by listening to waves breaking on shorelines. Dolphins echolocate their prey with blasts of sound. Coral-dwelling fishes are born in the open ocean, but then use the noises of the bustling reef to find home. And joining the sounds of life are the sounds of Earth systems: Winds scour the surface of the sea, which takes an extra pounding during storms. Earthquakes and submarine landslides send rumbles across whole oceans. The resulting tsunamis speed along the surface, making a racket—which marine animals are perfectly accustomed to.

It’s a critical, and critically understudied, aspect of how rising temperatures—and increasing noisy activity like shipping—might be affecting marine ecology. “The soundscape of nature really only came to the forefront of people’s thinking in the last 10 or 15 years,” says Ben Halpern, a marine ecologist at UC Santa Barbara, who studies pressures on ocean ecosystems. Scientists are now, for instance, getting a better idea of forest biodiversity by listening for life—insects, birds, amphibians—that might be hidden from the human eye. “It’s only more recently that people are starting to be aware of the role of soundscapes in oceans, telling us a story about what’s happening underwater as human impacts expand,” adds Halpern.

“It’s only more recently that people are starting to be aware of the role of soundscapes in oceans, telling us a story about what’s happening underwater as human impacts expand.”

Since sound travels faster and farther through water than through air, “neighborhoods” are bigger in the ocean. (Birds can communicate hundreds of feet, but for whales, it’s hundreds of miles.) How sound propagates over this area depends on the temperature, pressure, and salinity of the water. That’s because sounds are themselves pressure waves, which compress and decompress molecules in the water. When that water is warmer, molecules vibrate faster, allowing sound waves to travel faster. Pressure is higher the deeper you go. Salinity can change too if, say, you’re near a glacier that’s injecting freshwater into the sea.

This creates a sort of stratification: Temperature, salinity, and pressure combine in different ways, in turn influencing how sound propagates. “Think about it like oil and vinegar before you shake the salad dressing, but the ocean is made of different layers of salinity and different temperatures,” says bioacoustics researcher Alice Affatati of the Memorial University of Newfoundland and Italy’s National Institute of Oceanography and Applied Geophysics. Because these layers are distinct, sounds can bounce off them. “So if you imagine a whale as a source of acoustic waves, it matters where the whale is. If it is in deeper layers or shallower layers, even the same sounds it produces will vary the propagation,” she says.

Affatati and her colleague Chiara Scaini, also at the National Institute of Oceanography and Applied Geophysics, published research last month into how a changing ocean might be influencing the soundscape of a particular species, the North Atlantic right whale. They used a trove of previous data on those variables—temperature, pressure, and salinity—to identify two hot spots of change, a patch in the Greenland Sea and another off of Newfoundland. Here, the average speed of underwater sound could jump by more than 1.5 percent by the year 2100. This would make the whales’ calls travel farther, with unknown effects on how the species communicates.

The two researchers hope other scientists will use the same framework to investigate the changing soundscapes for other marine life. “It provides a starting point to other studies that can investigate, for example, how different species react to the same changes,” says Scaini. “The impact of this on marine life is something that is not known, because there are many variables that are involved. So it is not an easy problem that we can model.”

It’s no accident, though, that Scaini and Affatati identified the Greenland Sea as a place that’s changing. The Arctic is warming up to four times faster than the rest of the planet, in large part because as ice melts, it exposes darker ocean waters, which absorb more of the sun’s energy. The Pacific Ocean is also sending a shallow “acoustic duct” of warm water into the Arctic, which has been strengthening and dramatically changing the soundscape, according to a 2016 paper. In other words: The Pacific is essentially injecting sound into the Arctic marine ecosystem.
And as Arctic ice melts, the resulting freshwater cuts the salinity of the seawater underneath, further modifying the way that sound propagates. The same is happening in Antarctica, where warming seawater is eating away at the undersides of huge glaciers. “You’re going to get a layer of water on the surface that might be quite thick, that’s both warmer and has less salinity,” says Halpern. “That basically keeps sound from going between that layer and below that layer, which will just affect all sorts of things that rely on sound traveling through the ocean in that area.”

This is in addition to the absolute racket that human activities are making at the poles and elsewhere. Massive ships produce growls that ripple through the water. Oil rigs and other infrastructure only add to the din. Even aboveground noises, like cars moving over bridges, inject unwanted sound into the sea. “There’s all sorts of anthropogenic noise underwater, but also over-water that propagates, that is disrupting the ability for species to use sound as a tool,” says Halpern.

To get a better idea of how this changing soundscape is affecting blue whales, researchers at the Monterey Bay Aquarium Research Institute use hydrophones—underwater microphones that detect changes in pressure. “You’re collecting a mountain of data—2 terabytes a month from one sensor,” says MBARI biological oceanographer John Ryan. From this data, they can not only differentiate the sound of a ship from the sound of a whale at any given moment, but isolate the direction a sound came from. “We can then learn about how different animals use different parts of the habitat, how they respond to changes in their environment,” he says. (Listen to a library of MBARI’s recordings here.)

In that mountain of hydrophone data, Ryan and his colleagues are seeing just how important sound is to the biggest animal on the planet. “We’ve learned that blue whales apparently cooperate and signal each other acoustically to find the best foraging places,” says Ryan. “We can hear when blue whales are migrating, and the timing of their migration can vary by huge amounts from year to year.” When the ecosystem is highly productive, the whales stay longer, chattering away as the hydrophones listen.

By better understanding these movements, scientists better protect the whales. A system called Whale Safe, for instance, uses a network of hydrophones to alert ships when whales are present, so they can slow down. This doesn’t eliminate ship strikes entirely, but it gives the animals more time to get out of the way. “Understanding their movement ecology, and how and when they are more in danger of ship strikes—that’s a strategy for supporting their recovery,” says Ryan.

A dramatically changing soundscape is making life more complicated for ocean species, and that’s critical because noise is layering atop other stressors a species might be facing, like chemical and plastic pollution, or overfishing. But humans might also use their understanding of underwater sound to better protect sea animals. If scientists can identify particularly sensitive regions, we might be able to close them off to ships, or at least get the boats to slow down and pass through more quietly. “There are places where noise pollution really is one of the dominant stressors, one of the dominant issues that are facing marine species,” says Halpern. “And so I think it’s really valuable to pay attention to how ocean noise fits into that broader context.”