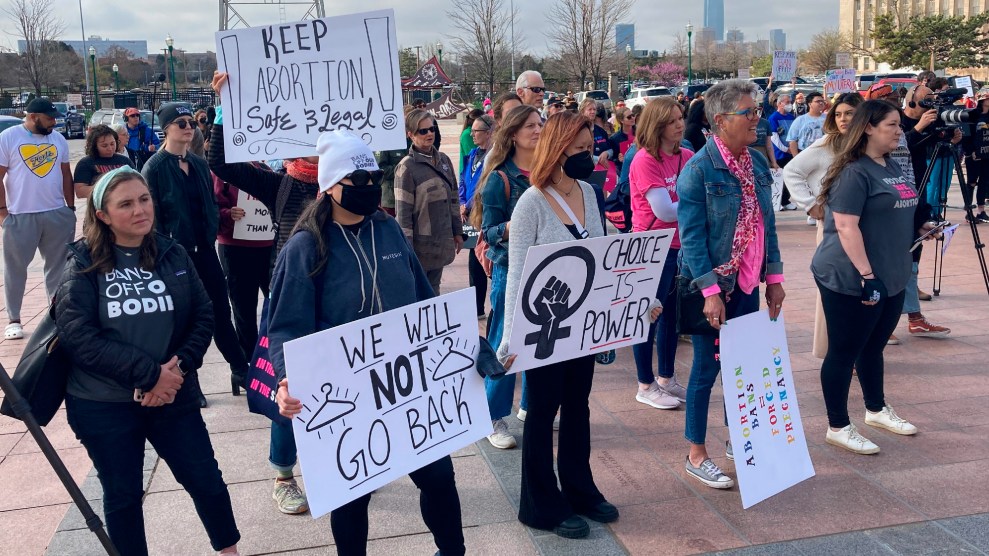 Update, May 4: Oklahoma’s Republican Gov. Kevin Stitt has signed the Texas-style abortion ban prohibiting people from obtaining the procedure after six weeks. The law, which went into effect immediately, will also allow private citizens to sue individuals who “perform or induce an abortion.”

On Thursday, the Oklahoma House passed a bill that would ban abortions after six weeks. The bill, which was already approved by the state Senate, would take effect immediately after being signed by the governor.

The legislation is just the latest attack on abortion rights in Oklahoma, which also recently passed a bill that would make it a felony to perform an abortion starting in August. But abortion providers in the state say they’re even more concerned about this new legislation—both because it would take effect immediately and because it will be more likely to survive a legal challenge. In an interview before the bill passed, Dr. Christina Bourne, the medical director of Trust Women, which operates abortion clinics in Oklahoma and Kansas, described it as “truly terrifying.”

The Oklahoma Heartbeat Act is a copycat version of the Texas Heartbeat Act, which allows private citizens to sue anyone who performs an abortion after six weeks. Like the Texas Heartbeat Act, the Oklahoma version allows anyone to bring a suit against any person who “performs or induces an abortion” or “knowingly engages in conduct that aids or abets the performance or inducement of an abortion.” The Texas bill, which went into effect last September, has so far stood up to legal challenges and drastically curtailed abortion access in the state. (At the six-week mark, many patients aren’t even aware that they are pregnant.)

Since last fall, as many as 45 percent of the patients who have been unable to seek abortions in Texas have been coming to Oklahoma, according to the University of Texas at Austin. Trust Women, one of only four abortion clinics in the state, has been fielding more than 100 calls an hour since September.

That surge has caused wait times at Trust Women to go up from a few days to four weeks, and the clinic has even had to turn away some patients. Trust Women has also had to eliminate services like STI testing and gender-affirming care due to the high demand. But Bourne emphasized that, just as abortion providers have adapted to the influx of patients from Texas, they will do their best to adapt to the Oklahoma bill. Trust Women’s Kansas clinic is already doing construction to expand its capacity for an anticipated influx of patients from Oklahoma and other states in the region that may continue to restrict access. The clinics are “not letting these restrictions win,” Bourne said. “I feel like that’s what makes folks in abortion so unique, is our deep flexibility and creativity, and we’re in this to keep doing this work.”

The Oklahoma Heartbeat Act is part of a wave of new anti-abortion legislation that has passed this year in anticipation of a major Supreme Court decision that could gut or overturn Roe v. Wade. But even with Roe still in place, the Oklahoma Heartbeat Act will be devastating to access in Oklahoma—and, because Oklahoma has been a hub for people from Texas seeking abortions, the entire region. “In these areas, Roe is no longer offering us protection,” Bourne said. “We’re essentially working in a post-Roe era here.”