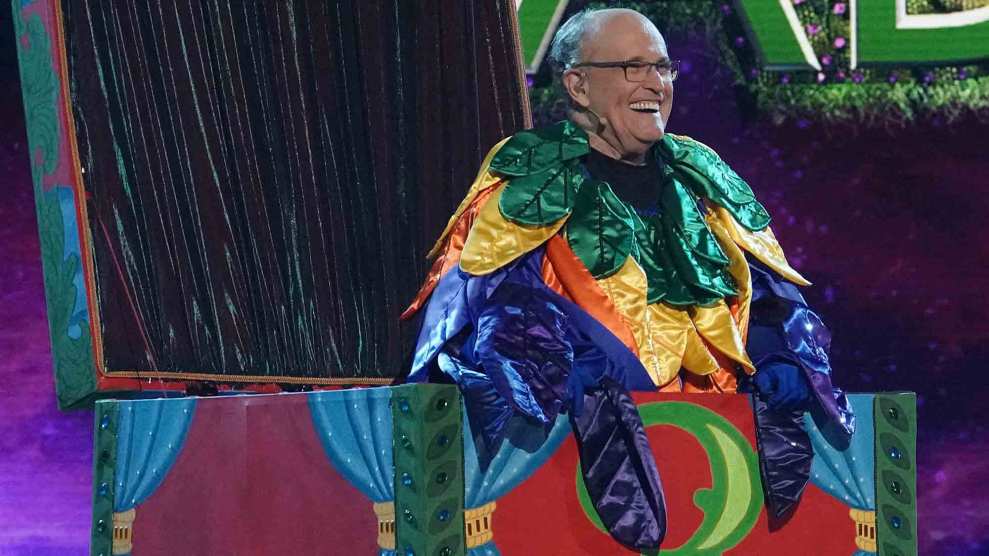 Editor’s note: This column by David Corn first appeared in his newsletter, Our Land. But we wanted to make sure as many readers as possible have a chance to see it. Our Land is written by David twice a week and provides behind-the-scenes stories about politics and media; his unvarnished take on the events of the day; film, book, television, podcast, and music recommendations; interactive audience features; and more. Subscribing costs just $5 a month—but you can sign up for a free 30-day trial of Our Land here. Please check it out.

In 1985, Neil Postman, a media theorist and cultural critic, wrote Amusing Ourselves to Death: Public Discourse in the Age of Show Business. He contended that television—with its focus on visuals—reduces news and politics to entertainment, essentially transforming public discourse into a circus and undermining “serious and rational public conversation.” The book originated with a talk he gave at the Frankfurt Book Fair, while he was participating in a panel discussion on George Orwell’s classic 1984. Postman posited that the threat to humanity came less from a totalitarian state, as Orwell envisioned, and more from an addiction to amusement, as depicted in Aldous Huxley’s dystopian Brave New World, in which citizens are constantly fed a happiness-generating drug called “soma.”

Postman warned that television, with its never-ending delivery of consumer entertainment, was the contemporary version of that drug. An endless flow of distraction and titillation—sensory input designed to entertain and sell us stuff—would turn us into passive and disconnected people unable to collectively grapple with the serious matters of the day. And this was before the onslaught of cable television, video rentals, DVDs, laptops, smartphones, tablets, the internet, social media, DVRs, streaming, and virtual reality. Postman, who died in 2003, worried that a visual media world then dominated by only three national broadcast networks and movie theaters was crushing our civic souls. What might he say now?

It was impossible not to think of Postman when reflecting upon Rudy Giuliani’s latest stunt. This week, Donald Trump’s consigliere appeared on an episode of Fox’s The Masked Singer, dressed in a jack-in-the-box costume, and sang (poorly) George Thorogood’s “Bad to the Bone.” If you can’t resist…

Comedian and actor Ken Jeong, a judge on the show (and a licensed physician), walked off the set in protest. And though Giuliani’s star turn was first reported over two months ago when the show was taped, the airing of this episode on Wednesday night reverberated throughout the media world.

This was deplorable. Giuliani has been a purveyor of Russian disinformation. He was the lead peddler of Trump’s big lie that the 2020 election was fraudulent. He provided false testimony while doing so. He lost court cases across the country. And he helped Trump incite the January 6 mob that violently stormed the Capitol in an attempt to overthrow American democracy.

Now he gets to yuk it up on national television—and use this stage to rehab his image. How can a guy in this getup who enjoys a good laugh be a danger to the nation?

Revulsion at this is not merely can’t-take-a-joke curmudgeonliness. A democracy that doesn’t punish those who actively seek to undermine it is a democracy at risk. Criminal prosecution may not be an option but shaming and ostracizing are. If a would-be coup plotter is embraced as just another fun-lovin’ celebrity, that hardly creates a disincentive for future assaults on the Constitution. This episode is a chilling example of television transforming politics into entertainment. Actually, more seriously, this turned insurrection into entertainment.

Postman, a Luddite who eschewed computers and mobile devices, might have gone too far in his total condemnation of television and all TV news. (Then again, I’m an MSNBC contributor and, as you know, an avid consumer of entertainment content.) But he certainly was right about its capacity to trivialize serious stuff. (See Trump, Donald: media coverage of, 2016.) In a world where a narcissistic, racist, misogynistic, ignorant, loudmouth reality television celebrity can become president, why not laugh along with his not-so-lovable, democracy-decimating sidekick?

In Amusing Ourselves to Death, Postman wrote, “What afflicted the people in ‘Brave New World’ was not that they were laughing instead of thinking, but that they did not know what they were laughing about and why they had stopped thinking.” Watch Masked Singer judges Jenny McCarthy and Nicole Scherzinger gleefully applauding the Giuliani reveal, and you can see exactly what Postman had in mind.

He also provided this gem:

When a population becomes distracted by trivia, when cultural life is redefined as a perpetual round of entertainments, when serious public conversation becomes a form of baby-talk, when, in short, a people become an audience and their public business a vaudeville act, then a nation finds itself at risk; a culture-death is a clear possibility.

Or perhaps a civic-life death.

Am I making too much of this one inane moment on a silly television show? We’ve also seen that one of our two major political parties has refused to confront the terrorist assault on Congress or the attempt to rig the election because doing so would interfere with The Trump Show, its most popular production. And while we’re on the subject of the devolution of politics into entertainment, Sarah Palin, a veteran of The Masked Singer and her own distorted-reality show, is running for Congress in Alaska. She claims she is driven by a deep sense of public service, though last time she held elected office, she quit halfway through her term.

The day after the Giuliani episode aired, former President Barack Obama delivered a thoughtful speech at Stanford University on disinformation. It wasn’t groundbreaking, but it’s worth watching. He discussed the obvious problems presented by social media and offered a few general notions about solutions, noting that Big Tech can do more to restrain the flow of dangerously false information. But what he didn’t confront was the demand side of the equation, the immense desire for disinformation. What do we do when 10 percent, 20 percent, 30 percent, or more of the public craves disinformation to feed and bolster their prejudices, grievances, outrage, and anger?

If Americans would rather be amused than engaged and informed, what can be done about that? Giuliani’s appearance on this show should be a warning that the ongoing democracy crisis here has not fully registered with the mainstream and many Americans. That’s a positive sign for Trump and Trumpism. If the underminers of democracy can get the rest of us to chuckle at their antics, it’s a big win for them and a step toward Trump’s overall goal: amusing ourselves to autocracy.