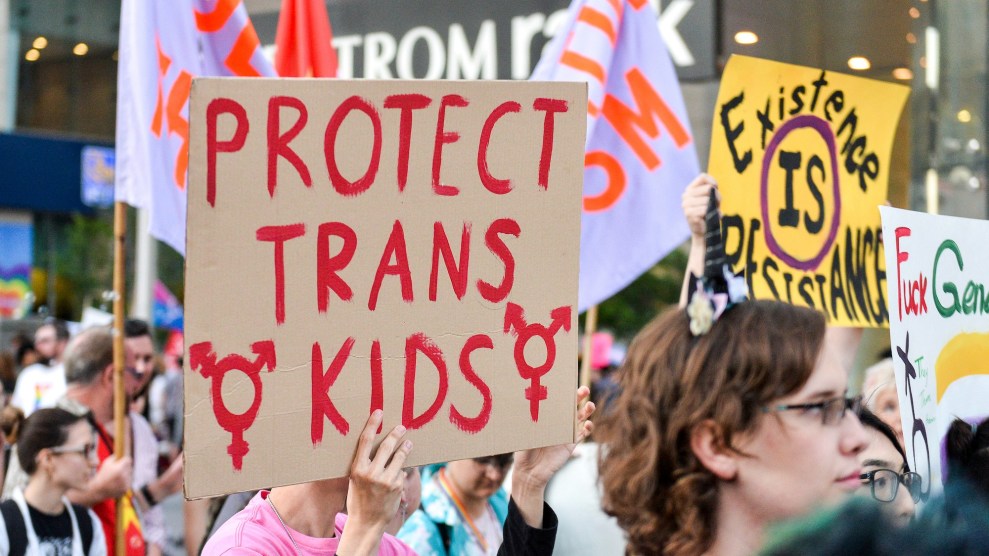 On May 8, Alabama became the first state in the country to ban the use of puberty blockers and gender-affirming hormone therapy for transgender people under the age of 19. The law is part of a spate of anti-trans legislation that has been sweeping the country in recent years, characterizing trans children as victims of liberal brainwashing and “medical experimentation,” subjecting the families of trans kids to CPS investigation, and barring trans and gender nonconforming teens from playing on the sports teams of their choice.

Alabama’s so-called Vulnerable Child Compassion and Protection Act was promptly challenged in court and partially blocked by a federal judge a week later. But the law has still sent the lives of trans kids and their families into disarray. Some are stockpiling their hormones. Others are working with abortion fund–like networks to travel out of state for care. Some of the most privileged families are considering moving altogether.

“If they want to put me in jail, they probably could based on everything that I’ve already done.”

Also in the crosshairs are physicians like Dr. Izzy Lowell, an Atlanta-based family medicine doctor who has worked for years to expand access to care for people transitioning, including minors. Lowell’s practice, Queer Med, offers puberty blockers and hormone therapy to nearly 3,000 trans and nonbinary patients across 14 states, via telemedicine as well as at her brick-and-mortar clinic in Atlanta, Georgia. When we talked this time last year, 18 states were considering bills that would ban gender affirming health care for trans minors, including 7 where Lowell works: Alabama, Florida, Georgia, Kentucky, Mississippi, Tennessee, and West Virginia. At the time, she was cautious, but committed to QMed’s mission. “If they want to put me in jail, they probably could based on everything that I’ve already done,” Lowell told me. “And if we say, ‘Okay, we’ll get out of Alabama,’ they’re going to come after Georgia, Mississippi, and half the other states we serve.”

Since then, she’s kept up her defiant streak. She got licensed in Texas, specifically to help the trans kids who were coming under coordinated fire from the state capitol, the governor’s mansion, and the attorney general’s office—though the legislature failed in 2021 to pass its own ban on trans health care for minors, earlier this year Gov. Greg Abbott instructed child welfare officials to investigate minors who receiving gender-affirming care as victims of child abuse. And now, if Alabama’s law is allowed to go into full effect, Lowell will be once again facing the fact that prescribing puberty blockers or HRT to her young patients in the state could land her a felony charge and up to ten years behind bars.

Lowell is facing a dilemma. She can either find a way to keep helping her patients and risk being the next anti-trans target, or she can leave her patients to fend for themselves. “As a physician, I took an oath to not abandon my patients,” says Lowell. “In Alabama, I may be forced to basically abandon them.”

I caught up with Dr. Lowell shortly after Alabama’s law went into effect (and just before it was temporarily blocked in court) to better understand how the law is affecting Lowell and her patients.

So we first met nearly three years ago under very similar circumstances. What’s happening with your patients now that the threats have finally become a reality?

We knew the law was likely to pass about a month ago—I think it passed in early April—and then when it did we knew it wouldn’t go into effect until May 8. So we contacted all of our Alabama patients under the age of 19, which is the age of legal authority in Alabama, and said, “Book a visit with us within the next month if you possibly can.”

We tried to see as many of them as we could, and even the ones that we couldn’t see, we sent in refills for their medications—either puberty blockers or HRT—for the maximum time for which we could write refills. For example, for one person I sent one set of three-month refills and they picked it up; two days later I sent another prescription authorizing early refills, they picked that up; then I sent one last prescription to get them through to their birthday. In December they’ll turn 19 so I said, “Book an appointment for the day after your birthday, but until then here’s as much medicine as we can give you. Good luck.” I hope nothing bad happens between now and then. It’s really terrible patient care. But better than someone running out of their hormone therapy for six months.

Is that basically what everyone was doing? Stockpiling their medicine?

I’m stuck with two really bad options. For that person in my example, they were already stable on their hormone dose, so it didn’t feel totally irresponsible to go longer between appointments than I normally would. But for other patients, we’re having them drive out of state. Since I’m licensed in all the surrounding states—Mississippi, Tennessee, Georgia—they can travel out of state and I can use one of my other licenses to treat them. Because of the archaic way that licenses work in this country, they can see me as long as they’re not physically located in the state of Alabama. So they can basically drive over the Alabama border into a parking lot in Mississippi or wherever and they can do a telehealth visit from the car.

“As a physician, I took an oath to not abandon my patients,” says Lowell. “In Alabama, I may be forced to basically abandon them.”

Now I’m trying to find out what will happen with pharmacies. Can I keep sending prescriptions to Alabama pharmacies? They will obviously continue filling for adults and cisgender people under the age of 19, for whom blockers or hormones might be prescribed for other reasons, but I don’t know what pharmacies are allowed to or will do for trans kids.

What are the physical effects of stopping gender-affirming hormones?

It’s terrible, basically. For someone who was assigned male at birth but taking feminizing hormones—I have plenty of patients in Alabama who have been stable on their doses for years—they would basically go through menopause overnight. They would go from a full adult-female dose of estrogen to zero within a few days because the half-life is fairly short. They may have emotional disturbance, even hot flashes. They’ll feel awful.

For someone who was assigned female at birth now cut off from testosterone, they wouldn’t start to have symptoms for a few weeks because the half-life is a little bit longer, but they would start female puberty. The masculinizing changes like voice drop and hair growth wouldn’t go back—those are not reversible—but they would start having periods and growing breasts. And lack of testosterone is quite difficult to handle emotionally as well. Some of the symptoms of low testosterone in cis men we know about are: not being able to concentrate, brain fog, feeling really low energy. So they would feel pretty uncomfortable.

Isn’t it kind of counterintuitive? Alabama’s law claims to protect kids from “medical experimentation,” but preventing them from taking blockers or hormones just sets them up to potentially need more involved medical procedures in early adulthood.

Everybody transitions differently, but I will say it’s a lot easier, to put it bluntly, to achieve better results if someone transitions earlier in life. In the right case, if they know that that’s correct for them, we can avoid so much more complicated medical interventions. Breast development is permanent, and chest surgery is major surgery. Or for someone that grows hair all over their body, they’ve got years of laser hair removal ahead of them.

How are your other patients handling the news outside of Alabama? States like Georgia, Tennessee, and Texas have tried to pass similar legislation, with mixed results.

I sent out an email to all of our patients, because I know not just people in Alabama are worried about this, saying, “We’re not going to stop providing care, we’re just going to do it in this different way.” And the responses from people who aren’t in Alabama or aren’t under 19 were just incredible. People were offering up their houses, saying people who travel from out of state can stay with us, offering to set up like a rideshare situation. I wouldn’t say it’s a set-up network, but I got so many replies asking, “How can I help?”

This interview has been lightly edited for length and clarity.