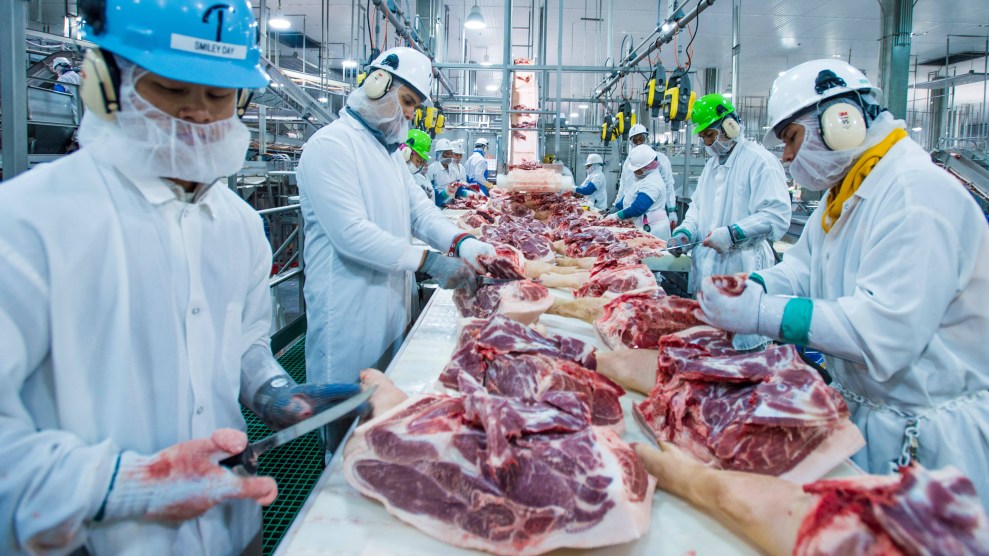 Workers at a Missouri pork-processing facility in 2017, prior to the pandemic.Preston Keres/Planet Pix via ZUMA Wire

This investigation was originally published by the Guardian. It is reproduced here as part of the Climate Desk collaboration.

Trump officials “collaborated” with the meatpacking industry to downplay the threat of Covid to plant workers and block public health measures which could have saved lives, a damning new investigation has found.

At least 59,000 workers at five of the largest meatpacking companies—Tyson Foods, JBS USA Holdings, Smithfield Foods, Cargill and National Beef Packing Company which are the subject of the congressional inquiry—contracted Covid in the first year of the pandemic, of whom at least 269 died.

Executives intentionally stoked fears about meat shortages in order to justify continuing to operate the plants under dangerous conditions.

According to internal communications, the companies were warned about workers and their families falling sick within weeks of the virus hitting the US. Despite this, company representatives enlisted industry-friendly Trump appointees at the USDA to fight their battles against Covid regulations and oversight.

In addition, company executives intentionally stoked fears about meat shortages in order to justify continuing to operate the plants under dangerous conditions. The fears were baseless—there were no meat shortages in the US, while exports to China hit record highs.

Yet in April 2020, Trump issued an executive order invoking the Defense Production Act to keep meat plants open following a flurry of communication between the White House chief of staff, Mark Meadows, the vice-president’s office, USDA allies and company executives.

The order, which was proposed by Smithfield and Tyson (whose legal department also wrote the draft), was an overt attempt to override health departments and force meat plant workers—who are mostly immigrants, refugees and people of color—to keep working without adequate protections while shielding the industry from lawsuits.

James Clyburn, chairman of the subcommittee, condemned the conduct of the industry executives and their government allies as “shameful.”

“Trump’s political appointees at USDA collaborated with large meatpacking companies to lead an administration-wide effort to force workers to remain on the job during the coronavirus crisis despite dangerous conditions, and even to prevent the imposition of commonsense mitigation measures. This coordinated campaign prioritized industry production over the health of workers and communities, and contributed to tens of thousands of workers becoming ill, hundreds of workers dying, and the virus spreading throughout surrounding areas.”

The meatpacking industry, which includes slaughterhouses and processing plants—is one of the most profitable and dangerous in the US. It is a monopoly business, with just a handful of powerful multinationals dominating the supply chain which, even before Covid, was bad news for farmers, workers, consumers and animal welfare.

One executive told a lobbyist that temperature screening was “all we should be doing.” The lobbyist replied: “Now to get rid of those pesky health departments!”

As Covid spread, the industry was warned about the high risk of transmission in their plants. For example, a doctor near the JBS facility in Cactus, Texas, wrote to a company executive in April 2020 saying “100 percent of all Covid-19 patients we have in the hospital are either direct employees or family member[s] of your employees,” warning that “your employees will get sick and may die if this factory continues to be open.”

In late May 2020—well after the importance of prevention measures such as testing, social distancing and personal protective equipment was widely recognized—an executive told an industry lobbyist that temperature screening was “all we should be doing.” The lobbyist agreed, replying: “Now to get rid of those pesky health departments!”

The report, Now to get rid of those pesky healthy departments!, reveals how USDA Trump appointees did the industry’s bidding in order to carry on with business as usual. The report is based on more than 151,000 pages of documents collected from meatpacking companies and interest groups, as well as interviews with meatpacking workers, former USDA and CDC officials, and state and local health authorities among others.

The documents show that:

As reports of Covid clusters at meatpacking plants increased, industry officials and the USDA jointly lobbied the White House to dissuade frightened workers from staying home or quitting. For instance in April 2020 the CEOs of JBS, Smithfield and Tyson among other companies asked the secretary of agriculture, Sonny Perdue, during a call to “elevate the need for messaging about the importance of our workforce staying at work to the POTUS or VP level.”

Vice President Mike Pence told meatpacking workers that “we need you to continue … to show up and do your job.”

It worked. At a press briefing soon after, Mike Pence told meatpacking workers that “we need you to continue … to show up and do your job,” admonishing recent “incidents of worker absenteeism.”

The report concludes: “Meatpacking companies knew the risk posed by the coronavirus to their workers and knew it wasn’t a risk that the country needed them to take. They nonetheless lobbied aggressively—successfully enlisting USDA as a close collaborator in their efforts—to keep workers on the job in unsafe conditions, to ensure state and local health authorities were powerless to mandate otherwise, and to be protected against legal liability for the harms that would result.”

The trade association for meat and poultry packers and processors rejected the report’s findings and accused the subcommittee of “cherry-picking data.”

In addition, a spokesperson for JBS said the company “did everything possible to ensure the safety of our people who kept our critical food supply chain running.” In a statement Cargill said: “We’ve worked hard to maintain safe and consistent operations to feed families during the pandemic, yet we did not hesitate to temporarily idle or reduce capacity at processing plants in the interest of our employees’ wellbeing.”

A spokesman for Smithfield said: “The concerns we expressed were very real and we are thankful that a food crisis was averted and that we are starting to return to normal…Did we make every effort to share with government officials our perspective on the pandemic and how it was impacting the food production system? Absolutely.”

Tyson said collaboration with the government was crucial to the supply chain and for worker safety: “Over the past two years, our company has been contacted by, received direction from, and collaborated with many different federal, state and local officials—including both the Trump and Biden Administrations—as we’ve navigated the challenges of the pandemic.”

The subcommittee investigation into the meatpacking industry’s response to the pandemic was launched in February 2021 following reports that meat companies had refused to take adequate safety measures precautions to protect workers during the first year of the pandemic. Last year, the subcommittee found that the illness and death toll at plants owned by the five big meatpackers had been grossly underestimated, and that the companies put profits over worker safety.

The Guardian has contacted the USDA and former Trump administration officials for comment.