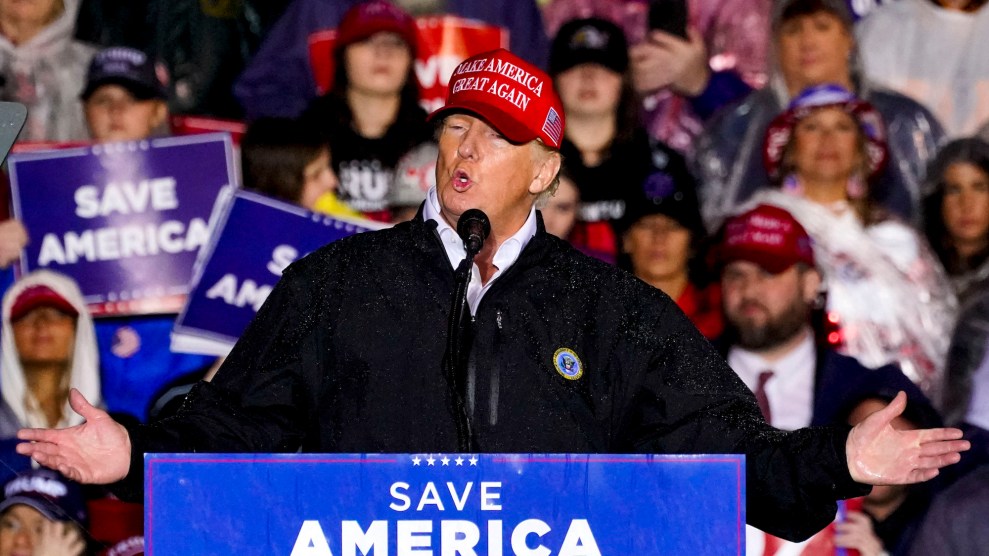 Former President Donald Trump now owes at least $150,000 in fines for contempt of court stemming from his failure to cooperate with New York Attorney General Letitia James’ civil fraud investigation into his business practices—and there’s still no indication of when the financial penalties will stop increasing.

Trump has been trying to fend off James’ investigation for nearly two years now, though his lawyers have done little to contest the evidence that James says she has turned up. Instead, they have mainly fought back with procedural obstacles and delays. Back in December, James’ office served Trump personally with a subpoena for records relating to his possible involvement in a series of asset valuations, and his attorneys have seemingly dragged their feet on the request ever since. Back on April 25, Trump was found to be personally in contempt of the court for failing to properly comply with the subpoena. New York Supreme Court Judge Arthur Engoron agreed with James’ request to fine Trump $10,000 per day. On the one hand, that’s not a terribly large sum for a billionaire. But it is a figure that, day after day, has really begun to add up.

As has been in the case for nearly every decision over the course of the fight with James, Trump’s attorney appealed the contempt decision and asked that the fines be put on hold until the appeal can be settled. But last week, a judge in New York State’s First Division (the state’s appellate court) denied the stay, which means the $10,000 daily fines will continue to accrue until either the appellate court overturns the contempt ruling or Trump satisfies the requirements of the subpoena.

This isn’t the only legal battle in which Trump has sought to use delay tactics—and the strategy has worked well for him in some of those other cases. Manhattan’s then-district attorney, Cy Vance, began a grand jury investigation into Trump in 2019, and Trump’s attorneys repeatedly appealed legal decisions in the case, twice bringing questions to the US Supreme Court. The Trump team lost nearly every one of those appeals, but Vance’s term as elected district attorney ended late last year, and his successor, Alvin Bragg, seems to have no appetite for pursuing a criminal case against Trump.

Last week’s decision by the higher court to deny Trump’s request for a stay of the contempt fines changes the calculus for pursuing the appeal, says Alexander Reinert, a law professor at the Benjamin N. Cardozo School of Law of Yeshiva University in New York City. That’s because further delays in the legal process could now come at a steep cost for Trump.

“The reason they tried to get the stay was so they weren’t faced with that significant risk of playing out the appeal, with the $10,000-a-day ticking for each day that the appeal is pending,” he says. “If they had gotten the stay the downside risk of losing on an appeal is less significant.”

Appeals are not necessarily quick, Reinert says, and there’s no telling how long it will take for the appellate court to reach a decision on the contempt ruling.

And, Reinert says, it’s extremely difficult to predict how the appeal will turn out. Despite its prevalence in television court dramas, real-life judges don’t hold people in contempt all that often.

“I think it’s a remedy of last resort in general for courts,” Reinert says. “They would much prefer parties comply with their orders. So the fact that a judge has to issue a contempt order means that to some degree the system has broken down.”

There’s no empirical data on how often appeals of contempt rulings are reversed. James asked for the contempt ruling in early April, after Trump failed to provide the records her office had requested starting in December. The list of subpoenaed records includes information from personal cellphones used by Trump during the years before he ran for president and any handwritten notes or Post-It notes that Trump may have created while discussing the question of how much he and his company are worth. James’ investigation centers on the question of whether Trump may have committed fraud by allegedly over-valuing his net-worth when attempting to get loans and insurance coverage and under-valuing his various assets when dealing with tax authorities in New York state and elsewhere. Trump has denied any wrongdoing.

Trump’s attorney, Alina Habba, says that the records simply don’t exist or aren’t in Trump’s personal possession. But after hearing from both sides, Engoron sided with James, writing in a decision on April 25 that the attorney general’s office “has satisfied its burden of demonstrating that Mr. Trump willfully disobeyed a lawful court order.” Engoron told Habba that he needed to see not only a sworn affidavit stating that Trump doesn’t have the documents James is asking for, but also details on who has looked for them and how they looked. If the records don’t exist, Trump needs to do more to show that he really did try to locate them, Engoron ruled.

Trump’s attorneys have taken two stabs at trying to “purge” the contempt—essentially prove to the judge that they have indeed cooperated. Last Friday, Engoron rejected their initial attempt. Trump had submitted a signed affidavit saying he didn’t have any records that James wants, but Engoron noted there was still no information about who searched for various requested items and how hard they searched.

Over the weekend, Trump’s attorneys filed a new attempt to purge the contempt, this one containing far more detailed recountings of how they searched for the records, but still left some odd holes. For instance, Habba wrote that Trump currently has two cellphones—an iPhone and one recently given to him by his social media startup TruthSocial—but that neither of them has relevant information on it. Habba said that no one knew where Trump’s company-issued cellphones from before he became president were. Attorneys for James responded on Monday that this was hardly an acceptable answer—if no one knows where Trump’s phones are, someone should explain how they got lost.

Habba also said in her filing that she had personally searched all the drawers and dressers both at Trump’s New Jersey country club and in Trump’s personal residence at Mar-a-Lago. Engoron has yet to rule on this second attempt to purge the contempt ruling.

Until either Engoron is satisfied or an appeals court reverses his contempt ruling, the $10,000 fines will keep adding up. Reinert says typically a payment doesn’t have to be made until a final figure is reached, but it also depends on how much money is at stake. It is possible, he says, that if the number starts getting very large, the court might order Trump to put at least part of the accumulating total into an escrow account. And while the defeated president has a well-documented history of making it as difficult as possible for his creditors to collect their money, Reinert says that if the contempt ruling is not reversed and a final sum is eventually determined, Trump won’t be able to avoid paying.

“To the extent he has assets in New York, he has to pay,” Reinert says. “It’s going to get collected,”