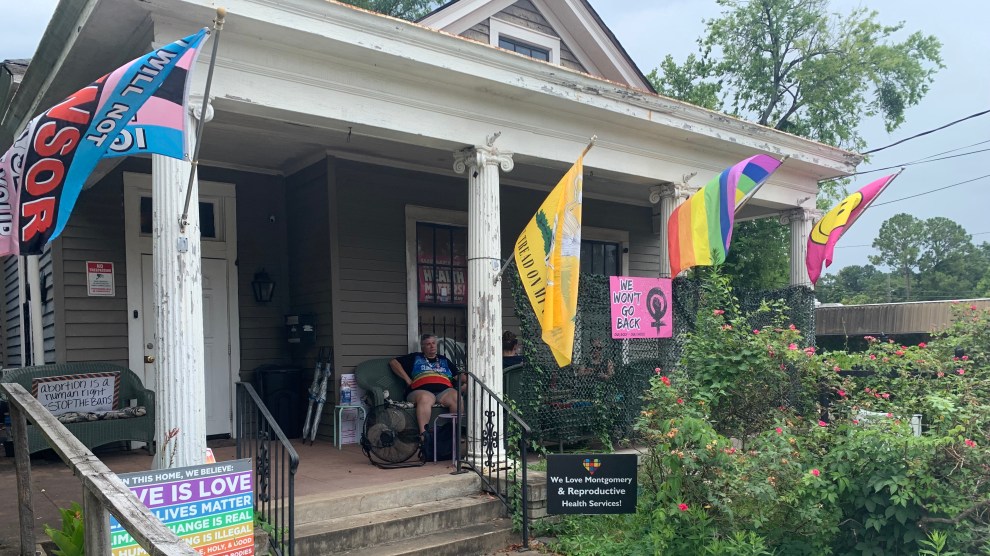 The Monday morning after the Supreme Court overturned Roe v. Wade, decimating the near-50-year-old constitutional right to abortion, a red pickup truck pulled into the near-empty parking lot at Reproductive Health Services, Montgomery, Alabama’s abortion clinic. The driver, a woman from Birmingham, an hour-and-a-half away, rolled down her window as a petite white woman with a pink ponytail, wearing a bright rainbow vest, strode across the cracked asphalt to meet her. When she reached the truck, Mia Raven began to gently explain that her appointment was canceled, that the unthinkable had happened, that abortion was now illegal in Alabama.

When she reached the truck, Mia Raven began to gently explain that her appointment was canceled, that the unthinkable had happened, that abortion was now illegal in Alabama.

The woman inside the truck was dumbfounded. She told Raven that she had called the clinic in Montgomery that morning before she left and had been assured that the doors were open, that she should come on down. It didn’t take long for Raven to piece together what had happened. She pointed across the street to a lot where people lingered among signs advertising free ultrasounds.

A man had also walked up to the truck from that direction, but he stayed on the sidewalk, looking at the duo and loudly droning a sermon he had clearly given many times.

“You spoke to the crisis pregnancy center outpost over there,” Raven said flatly. “They won’t help you get an abortion.”

“But they have the word ‘choice’ in the name!” the woman explained.

Raven nodded sympathetically. “I know, baby, that’s how they confuse you.”

She pulled a sheet of paper off the clipboard she’d been clutching and handed it through the window of the truck. At the top of the paper, it read: As of June 24, 2022, abortion is now illegal in Alabama. We hope you find this list of resources & information helpful. Below, there was a list of resources for continuing a pregnancy, the information for a pro-choice adoption agency, and a list of states where abortion is legal (with caveats about gestational bans and that the landscape is shifting quickly). Within moments, the window was rolled back up, and the truck slowly pulled out of the parking lot and out of sight.

Clinic escorts are here. When patients arrive, they give them this sheet of paper, which was vetted by lawyers, to inform them abortion is no longer legal here. They cannot even recommend specific clinics that are still open. pic.twitter.com/TWTNOtaCRF

In the next half-hour or so, this basic series of events repeated twice more. Then, by around 10 a.m., there were no more cars.

After the cars stopped, Raven headed next door to the clinic, to the POWER House, a gray Craftsman with a spacious porch where clinic escorts and, in days past, patients sit and smoke and visit, box fans exhaling hard into the thick, sticky air. It’s an organizing hub of sorts among the social-justice-minded folks in this blue city in a red state. (POWER is an acronym, standing for People Organizing for Women’s Empowerment and Rights.) Raven settled into a teal green wicker bench and lit a cigarette.

Today, only four people were there. Raven was frustrated, feeling stifled by her inability to give patients real, concrete information, on top of overwhelming grief. “I knew this was coming, and I planned for it,” she said. “But I didn’t plan for—and that’s on me—the criminalization of speech.” Raven and her cohort of clinic escorts are acting on the advice of a lawyer to not refer patients to specific abortion clinics, lest they be charged with conspiracy to commit a crime. “I have criminal attorneys,” she said, exasperated. “I’ve never had criminal attorneys in my life.”

She wondered aloud about a father who called the clinic on Thursday, desperate to get help for his 14-year-old daughter who was pregnant. She urged him to act fast. “I hope they were able to get in somewhere.”

In 2019, the state passed a law that banned all abortions, known as the Alabama Human Life Protection Act. It was overturned in court that October, but on Friday, when the Supreme Court nullified Roe, the precedent that underpinned the 2019 ruling, state Attorney General Steve Marshall filed an emergency motion to reinstate the law. The motion was granted and the ban took effect the same day.

By now, most people know what has happened. On Saturday, Kari Crowe, an administrative assistant with the clinic, one of three in the state, sent out roughly 80 text messages to patients with upcoming appointments to let them know that they could no longer access abortion care at Reproductive Health Services, nor in the state more generally. “We deeply apologize that we are no longer able to help you access the reproductive care you DESERVE and are entitled to,” the messages said. “We have served the people in the Montgomery area with compassion and care since 1978. Reproductive justice is a value held deeply by all of us at Reproductive Health Services and this blow may very well mean the end of our clinic, but it is not the end of the fight.” She called the patients she couldn’t reach by text message, and cried with them over the phone. Patients who had come in for their first appointment but had not had their second appointment, during which they would have received abortion care, were refunded their money.

Crowe, too, was on the porch Monday afternoon, following the conclusion of a what-to-do-next meeting at the clinic next door. She wore her fine brown hair pulled back into a severe bun, accented with two silver spikes, one topped with a tyrannosaurus rex, the other with a stegosaurus. She wondered aloud about a father who called the clinic on Thursday, desperate to get help for his 14-year-old daughter who was pregnant. The Montgomery clinic was booked, but she urged him to act fast—maybe try Atlanta, call the National Abortion Federation; she knew the ruling was coming soon, and she told him as much. “I hope they were able to get in somewhere, or at least communicate with someone who is able to get them better info,” she said, words falling heavily.

Around back, in the clinic parking lot, Travis Jackson was keeping watch for anyone who came to the clinic seeking care (or seeking trouble). Jackson is a Black Army veteran who has been working as an escort at Reproductive Health Services for seven years—his anniversary was a week ago. The day was scorching, more akin to August than June, but he was prepared with a cooler full of ice water and cold towels, a gallon of Gatorade at the foot of his shaded lawn chair. After he returned from Iraq in 2008, he spent time with texts written by Angela Davis, Audre Lorde, Malcolm X, Assata Shakur, and others, and he began reckoning with some of his long-held views about religion and gender.

Through POWER House, “I found my continuous service to my country, which is to be on the battlefield for reproductive rights of abortion and birth control,” he told me. “And this is the best way that I can utilize my male privilege for the good of the cause.” The work, which he does in addition to other LGBT+ and civil rights activism, has sustained him. Today, the soft crunch of his footsteps across an empty lot was unsettling. He went to rallies over the weekend, surrounded by like-minded, angry, grieving Alabamians, but in that moment, it was just him and the women on the porch.

Meet Travis, a clinic escort here. He wanted me to show y’all his sign. 🖤 pic.twitter.com/WSfaE09VRU

Still, he was holding tightly to hope. “Once we stop erasing Black, Indigenous voices of color, we will fully recover,” he said. Here, in the heart of the historic civil rights movement, he drew power from the activists who came before him, and their dedication to freedom and equality keeps him going, especially on days like this one. “They may take my microphone, but they’ll never take my message,” he pledged.