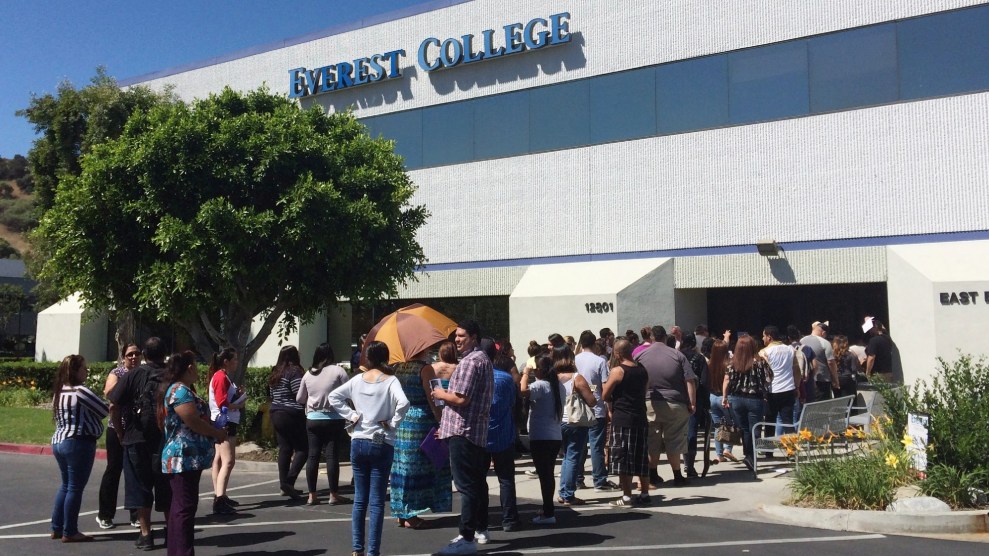 Students wait outside an Everest College campus in California for information in 2015, after the school's owner, Corinthian Colleges, closed all of its campuses amid fraud allegations.Christine Armario/AP

Late on Wednesday evening, the Education Department announced that it will automatically cancel $5.8 billion in loans for 560,000 borrowers who attended Corinthian Colleges, a chain of fraud-ridden for-profit schools. The move is the single largest student debt cancellation action ever taken by the department. It concludes a multi-year push by ex-Corinthian students and advocates for debt relief for people who enrolled at the schools, which engaged in widespread deception of prospective students.

“When fifteen former Corinthian College students launched a debt strike in 2015, we were determined to fight for relief for all defrauded borrowers,” Nathan Horne, one of the first Corinthian students to organize for debt relief, said in an emailed statement. “We didn’t know it would take eight long years for justice to finally be done.”

At its peak, Corinthian had more than 105,000 students across more than 100 campuses of several chains of schools, including Everest, Heald College, and WyoTech. In the spring of 2015, Corinthian declared bankruptcy amid charges of fraud from multiple state attorneys general, including Vice President Kamala Harris when she was still California’s top prosecutor. At the time, Corinthian also faced scrutiny from the Education Department itself, which fined the chain $30 million for luring students into enrollment with false job placement numbers that the schools inflated through eye-popping tactics that included paying outside companies to hire their graduates for as little as two days in order to then include those students in their placement rates.

The department’s initial crackdown on Corinthian was motivated by activism from Corinthian students themselves, as well as their allies at the Debt Collective—a debtors’ union formed by former Occupy Wall Street activists to advocate for debt cancellation. In 2014, members of the collective helped develop a legal mechanism called “defense to repayment” by which Corinthian students could ask the Education Department to nullify their debt because they’d been lied to by their schools. As I explained in a story about the collective:

Member Luke Herrine, an NYU law student, was doing a summer internship with the Consumer Financial Protection Bureau (CFPB) when volunteers with the Debt Collective stumbled on a Facebook group of students at Corinthian Colleges. In the group, alumni of the for-profit, 100-plus campus chain had begun commiserating over their struggles with the enormous loans they’d taken out, lured by Corinthian’s inflated job placement and salary numbers.

Herrine pored over the Higher Education Act, which governs federal student loans, and found a clause allowing borrowers to contest repayment of their loans if the school had lied to students during enrollment. Based on this discovery, the Debt Collective created an application on its website so students of fraud-­ridden for-profit colleges could send “defense to repayment” (DTR) claims to the Education Department, as Hanna and other members barnstormed a dozen cities recruiting indebted former Corinthian students.

That February, the “Corinthian 15” officially announced a debt strike; within a month, their ranks had grown to more than 100, with hundreds more sending in DTR applications. In March, the 15 and key collective members traveled to Washington to meet with education officials. At the end of their conversation, Herrine placed a red box containing 257 DTR applications in front of Ted Mitchell, a department undersecretary.

Defense to repayment eventually enabled more than 100,000 Corinthian students to get their loans canceled by the Education Department. But Wednesday’s action is especially significant because the department will preemptively cancel all remaining loans for hundreds of thousands of additional Corinthian alumni without requiring them to apply for this relief. This type of action, known as a “group discharge,” has only been taken by the Education Department in a few smaller, select cases, explains Eileen Connor, the director of litigation at Harvard Law School’s Project on Predatory Student Lending.

The Debt Collective and Corinthian borrowers have spent years trying to push the department to institute this sort of automatic relief, particularly once the department itself issued findings related to Corinthian’s fraud. Yet for years, many people saw the notion of a group discharge as far-fetched, Connor says. Given that history, it is notable that the department has fully changed course, taking an action that it avoided for years. And as the Biden administration edges closer to a decision on whether to cancel $10,000 or more of student debt per borrower, its pivot on discharging Corinthian students’ debt may hint at a growing willingness to take other debt cancellation steps that have long been deemed impracticable.

“It’s really remarkable that something’s happening today that when people were calling for it initially, it was treated as almost impossible to imagine,” Connor says. “As a demarcation of where we are, you can see such a shift. For people who are today making calls for broad-based debt cancellation, that is heartening.”