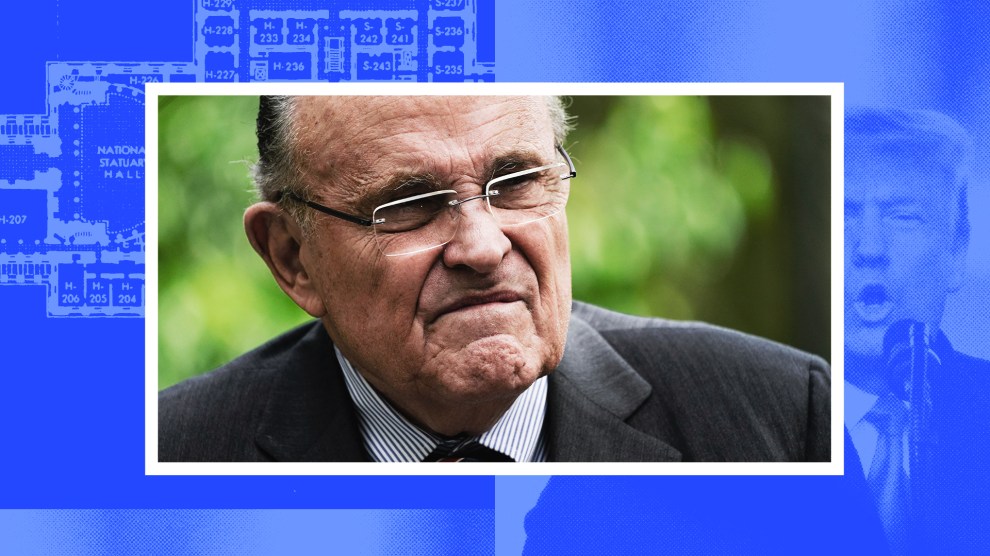 Donald Trump presumably wasn’t drunk when he prematurely declared victory at 2:30 a.m. on November 4, 2020. The 45th president, who famously doesn’t drink, was following a previously formed plan to try to steal an election he lost.

Hence, the “apparently inebriated” condition of Rudy Giuliani when he urged Trump to baselessly claim he’d won—as Rep. Liz Cheney, the Republican vice chair of the House committee investigating January 6, memorably put it during a hearing Monday—is kind of a distraction.

We know Giuliani drinks. And it’s been revealed before that the former New York mayor was in his cups on election night when he reportedly told Trump to “just say we won.” To be sure, it’s interesting that Trump aide Jason Miller said that Giuliani, then Trump’s personal lawyer, was “definitely intoxicated” that night when Giuliani disagreed with Trump campaign aides who told Trump he was losing. But it seems unlikely that Rudy, even dead sober, would have given different advice, or that Trump would have followed a different path if he had.

Giuliani responded to this testimony a day after the hearing, tweeting Tuesday that claims he was drunk on election were lies.

I am disgusted and outraged at the out right lie by Jason Miller and Bill Steppien. I was upset that they were not prepared for the massive cheating (as well as other lawyers around the President) I REFUSED all alcohol that evening. My favorite drink..Diet Pepsi

Before election night in 2020, it was clear that Trump would never admit he lost. Instead he would use the early leads he was expected to have in many states— a result of his backers disproportionately voting in person rather than by mail—to declare victory and to advance the false claim that late-night shifts in favor of Joe Biden were the result of cheating. This was part of Trump’s larger plan to use election fraud conspiracy theories to challenge the legitimacy of his defeat.

Trump made his intentions clear when he refused to say he would concede if defeated and railed against expanded mail-in-voting efforts that states implemented due to Covid. “The only way we’re going to lose this election is if this election is rigged,” he said in Wisconsin in August 2020.

In September 2020, a widely-cited Atlantic report outlined how Trump might use his power to “obstruct the emergence of a legally unambiguous victory for Biden” and use uncertainly to try to remain in power. On November 1, 2020, Axios reported that Trump intended to declare victory on election night if it looked like he was ahead.

The only slight surprise was that Trump followed this plan even though, as conservative election attorney Ben Ginsberg testified Monday, the contest, ultimately, “was not close.”

The fact that Trump had a preexisting plan to pretend he won the election even if he lost shows that he was not confused. He was lying. He knew his claims were false, or just as bad, didn’t care whether they were or not. He was not led astray by a tipsy adviser. He intentionally undermined confidence in the election because he wanted to retain power.

This was a key point of Monday’s hearing. “Donald Trump lost an election, and knew he lost an election,” committee chair Bennie Thompson (D-Miss.) explained in his opening remarks: “And as the result of his loss, he decided to wage an attack on our democracy.”

*This article has been updated with Giuliani’s denial that he was drunk on election night.