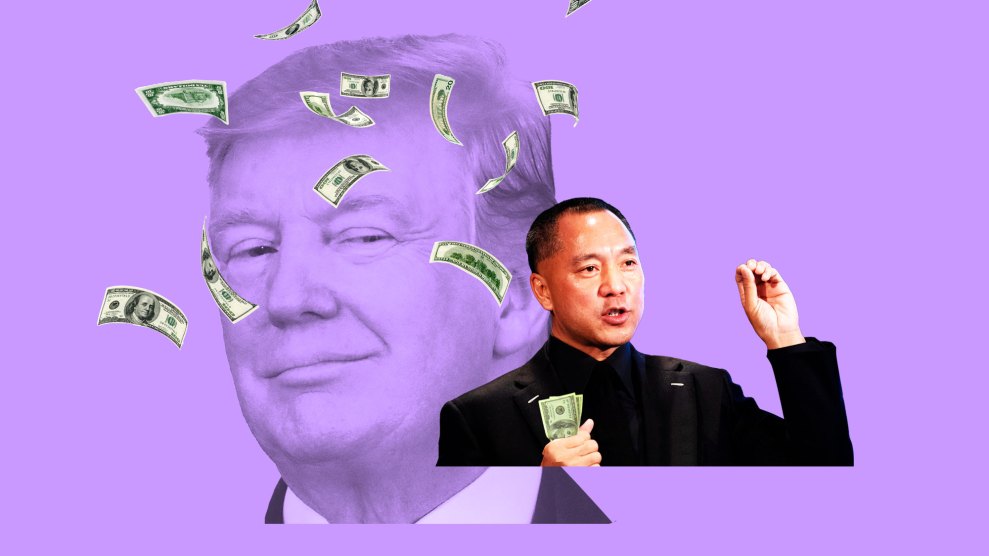 A fugitive Chinese mogul who has worked closely with Steve Bannon—and who is under federal investigation for fraud—spent hundreds of thousands of dollars to support efforts to overturn the 2020 election.

Through a series of opaque financial transactions, a company controlled by the exiled businessman Guo Wengui spent more than $400,000 for hundreds of his supporters to take part in a November 14, 2020, rally in Washington promoting Donald Trump’s false claims of election fraud. The company also gave $100,000 to an organization run by prominent pro-Trump attorney Lin Wood—apparently to finance litigation that was aimed at reversing Joe Biden’s victory in Georgia. These payments are detailed in receipts, wire transfer records, and WhatsApp messages obtained by Mother Jones.

Wood said in interviews that the $100,000 donation to his nonprofit, the Fightback Foundation, was arranged by Bannon, the former Trump adviser and influential right-wing media figure. According to Wood, Bannon claimed the money came from a donor in Illinois. Documentation obtained by Mother Jones indicates that the funds came originally from Guo. Bannon did not respond to a request for comment. Neither did Guo and his attorney.

Guo is a former Chinese real estate developer—once ranked as the 74th richest person in China—who fled that country in 2014 ahead of corruption and other charges there. After arriving in New York, he set up shop in a lavish Manhattan apartment and gained attention by launching a torrent of unsubstantiated accusations of corruption and sexual misconduct by Chinese Communist Party elites.

Partnering with Bannon, Guo launched Chinese-language media companies and developed a sprawling network of zealous backers from the Chinese diaspora, including club-like organizations in the United States and cities around the world. Guo uses that network to raise capital for various business ventures—a fashion company, crypto currency—and to advance often bizarre conspiracy theories about China, Covid, and US politics. The New Federal State of China, launched in 2020 by Guo and Bannon, purports to be a government-in-waiting, ready to replace the Chinese Communist Party, which Guo claims is poised to collapse. As Mother Jones has reported, Guo and his backers aggressively supported Trump in 2020, promoting false claims about Chinese influence over Hunter Biden and publishing sexually explicit material from Hunter’s laptop. In 2021 Guo promoted the unfounded conspiracy theory that Chinese hackers had switched votes from Trump to Biden.

RELATED: How Miles Guo Built an Empire of Bullshit

The new information shows that Guo played a previously unreported role in financing the promotion of false election fraud claims in the immediate aftermath of Trump’s defeat. Guo’s spending on these efforts was not against the law. But Guo—a divisive figure with extensive legal problems—had ample reason to seek Trump’s favor. Guo is pursuing political asylum in the United States. If denied, he could face deportation and probable imprisonment in China. He was then, and remains, under investigation by US federal prosecutors for possible fraud and other malfeasance. Since 2020, the US Security and Exchange Commission has also been investigating his role in what it has said was an illegal public offering by a Guo media company. The SEC forced three companies linked to Guo to pay a $539 million settlement last year. According to two sources with knowledge of the probe, the commission is continuing to investigate Guo personally.

Guo has also been accused in lawsuits filed by former business partners and Chinese dissidents of working as a Chinese agent while posing as a CCP critic. No court has ruled on the legitimacy of those allegations, and Guo denies them. He denies all allegations of fraud and other wrongdoing, as well.

The November 14, 2020, rally—dubbed the “Million MAGA March” and loosely organized by a disparate group of far-right figures—was one of several large demonstrations in DC in which Trump supporters promoted the false claim that the election had been stolen. These events culminated in the January 6 attack on the Capitol. Peaceful during daylight, the November rally, which attracted tens of thousands of Trump backers, was followed by nighttime violence involving members of the neofascist Proud Boys. No Guo supporters have been accused of engaging in illegal conduct on November 14, and there is no evidence that Guo had any connection to the violence that weekend.

Guo spent heavily to ensure his New Federal State of China would have a presence at the November rally. The documentation obtained by Mother Jones shows that a company controlled by Guo paid vendors who provided equipment for an NFSC event that day in which Guo’s supporters praised Trump and condemned the Chinese government.

This included a $46,000 payment to a Maryland company to rent a stage, a large LED screen, a sound system, lights, and a tent. According to the contract, these items were originally supposed to be set up in Freedom Plaza, where thousands of pro-Trump rally-goers gathered at the start of the Million MAGA March. For unclear reasons, Guo’s backers instead ended up using a space about half a mile south of Freedom Plaza, on the National Mall near the Washington Monument. The Guo-controlled company paid another $10,000 for a DJ. It paid $139,000 to rent studio space from which Guo supporters broadcast a livestream during the rally. The CEO of the firm that rented out the space said they “have declined to do any further business with the company” after learning that Guo was behind the event.

The livestream emphasized the Guo backers’ role in the Million MAGA March. It showed his fans in Freedom Plaza, holding anti-CCP signs. On the Mall, a larger group of Guo’s followers, clad in matching blue New Federal State of China hoodies and hats, held pro-Trump signs by the Washington Monument. One video shows the group dancing to a version of “YMCA”—a Trump rally mainstay—with MAGA-inspired lyrics. Guo, from Manhattan, appeared on the livestream, at one point declaring the rally was held “to support the president.”

“All the expenses for this Washington event were paid in advance by my personal company.”

The Guo-controlled company paid more than $300,000 to transport around 250 Guo supporters to the rally and to tout their presence there. That included $130,000 for transportation, hotel rooms, and $300 per diems. Guo’s backers at the rally highlighted the NFSC’s support for Trump, distributing fliers that read, “Jesus is king; Trump is President,” with the organization’s logo and flag beneath.

In addition, the firm paid $150,000 for 50 trucks with advertising displays. It spent another $30,000 on a separate set of 10 trucks with digital billboards. Images from the day show that these ads displayed a combination of pro-Trump and anti-CCP messages as the trucks traveled around downtown DC. In one video montage, trucks with displays that read “Uphold the Constitution” and “President Trump, American Hero” passed the Tidal Basin. One vendor familiar with those rentals said that Guo’s backers had secured “as many trucks as they could” and noted that renting 60 trucks for a single event “is unheard of in this industry.”

Guo and his backers used multiple organizations to make arrangements for November 14. For instance, one company owned by a Guo associate in New York signed contracts with some of the vendors. On another contract, “Rule of Law”—a reference to nonprofits launched by Guo and Bannon in 2019—is listed as the client. Another limited liability corporation that Guo controlled then paid the vendors. Guo did not legally own that firm, but in WhatsApp messages obtained by Mother Jones, Guo’s personal assistant, and occasionally Guo himself, directed the payments. “All the expenses for this Washington event were paid in advance by my personal company,” Guo said in a November 13 audio message in Chinese to a group of his employees and supporters, referring to the LLC.

According to people who have worked with him, complex financial arrangements are standard practice for Guo. He officially owns almost nothing, with assets like his yacht nominally owned by family members or other associates through offshore companies. In February, Guo, who is often identified as a billionaire in press reports, filed for bankruptcy, claiming to have virtually no assets, along with up to $500 million in debts. Creditors and judges have questioned these claims, suggesting Guo is hiding assets to avoid repaying what he owes.

Guo’s support for efforts to overturn the election went beyond simply funding a rally. Transaction records reveal that on December 3, 2020, the same company that had paid vendors for the November 14 event wired $100,000 to the Fightback Foundation, a nonprofit run by Wood, the pro-Trump lawyer. In a note accompanying the wire transfer, the person who sent it indicated it was for “DC RENTING.”

In interviews with Mother Jones, Wood confirmed that his group received this payment. But he said the Fightback Foundation had no involvement with the November 14 rally or any events in Washington. Wood said the donation was instead meant to support a federal lawsuit he filed in November 2020 which aimed to overturn Biden’s victory in Georgia by alleging the state’s mail-in ballot procedures were illegal. Wood said he does not know why the wire transfer indicated otherwise.

According to Wood, Bannon called him shortly after Election Day in 2020 and said he could help arrange donations to finance Wood’s litigation. Wood recounted that Bannon said he could provide up to $5 million and asked: “How much do you need?” Bannon later called back, Wood recalled, and announced he had found a donor in Chicago “who wants to give $100,000.” (The Guo-controlled company that made the wire transfer was incorporated in Chicago.)

Wood told Mother Jones that he found the donation suspicious—”it smelled like a rat”—and decided to put the money in escrow. After a year, however, Wood’s organization transferred the money into its general fund. Another person who worked with Wood at Fightback, who asked not to be identified, also said that Wood in 2020 had mentioned Bannon’s involvement and that Wood had expressed suspicion about the money at the time. “We were just unsure of its origin,” the person said.

Wood said that Mother Jones‘ inquiry validated his initial concern about the donation. The real source of the money, he said, “was probably Guo.”