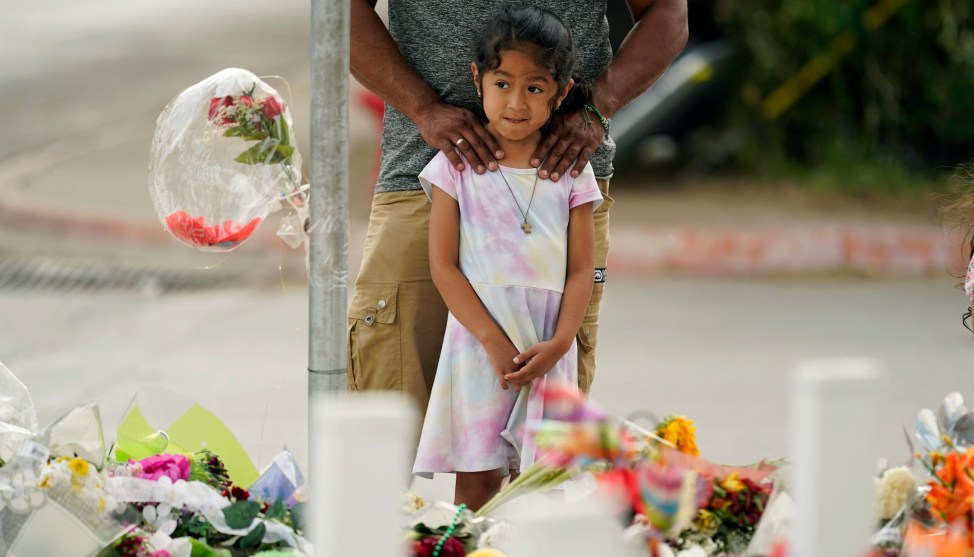 Visitors at a memorial at Robb Elementary School in Uvalde, TexasEric Gay/AP

With the recent spate of mass shootings, a wave of public opinion polling has reaffirmed Americans’ well-known views on gun violence. Foremost, those include long-running majority support for comprehensive background checks for gun buyers, including among Republicans and gun owners. Other measures with strong bipartisan support include “red flag” laws for temporarily removing firearms from individuals deemed by a judge to be dangerous, and raising the age requirement to 21 for purchasing weapons. The age issue took on grim new resonance with the 18-year-old perpetrators who unleashed carnage in Buffalo, New York, and Uvalde, Texas, after each had legally purchased AR-15-style semiautomatic rifles and large stockpiles of ammunition.

A new poll published by CBS News on Sunday, however, added a jaw-dropping dimension to the national picture. Nearly three quarters of Americans believe we can prevent mass shootings if we prioritize the goal of doing so—yet an astounding 44 percent of Republicans think we just have to accept these gun massacres as part of living in a “free society.”

Even acknowledging that Americans’ views on guns are complex and highly politicized, this is a shocking finding, particularly after a fresh slaughter of school children.

This apparently common perspective among Republicans is more than bleak on its own merits. Recently, I wrote about the ingrained national narrative of resignation about the mass shootings epidemic, in the context of outrage over the chronic failure of Congress to strengthen gun laws. Acceptance of the carnage among Republicans as a fact of American life is a different twist on the theme that “nothing really can be done” about mass shootings—a theme whose repetition may in fact worsen such attacks:

This narrative has become part of the problem itself—in some cases possibly even fueling the escalating cycle of mass shootings. That’s because it validates the recurring violence, framing it as an indefinite feature of our reality.

And mass shooters pay heed. After nearly a decade of studying these attacks and how to prevent them through the work of behavioral threat assessment, I documented extensive case evidence for my book, Trigger Points. The research shows that many perpetrators are keenly aware of media and political narratives about their actions….They want notoriety, and they seek justification and credibility for their acts of violence. And in the message that America will never stop these mass shootings, they find such affirmation.

“School shootings happen all the time,” remarked a troubled 17-year-old subject of one threat investigation I examined. He had become fixated on watching videos about the 2018 school massacre in Parkland, researched where he might buy a firearm, and later commented that committing such an attack could be an easy way for him to “get famous.”

The CBS poll contains other stark findings. Sixty percent of Republicans believe mental health treatment is key to solving the problem—suggesting that blame on mental illness for mass shootings by the NRA and Republican officials has strong traction with their constituents, despite the fact that such blame is fundamentally wrong and misleading.

Parents throughout America, meanwhile, are profoundly troubled by the recent tragedies. Nearly three quarters are “somewhat” to “very concerned” about gun violence at their kids’ schools. In the aftermath of the massacre at Robb Elementary in Uvalde, a clear majority described themselves as scared, nervous, angry, sad, and stressed in thinking about their children’s well-being. A majority said their children have also felt scared and sad.

It’s important to keep in mind that schools continue to be among the safest places in the United States for kids to be. Additionally, the 72 percent of Americans who do believe mass shootings can be prevented are correct. Beyond the long-term struggle to improve gun laws in ways most Americans consistently say they want, there is a lot we can do as a nation to stop these horrific attacks from happening in the first place, in our schools and beyond.