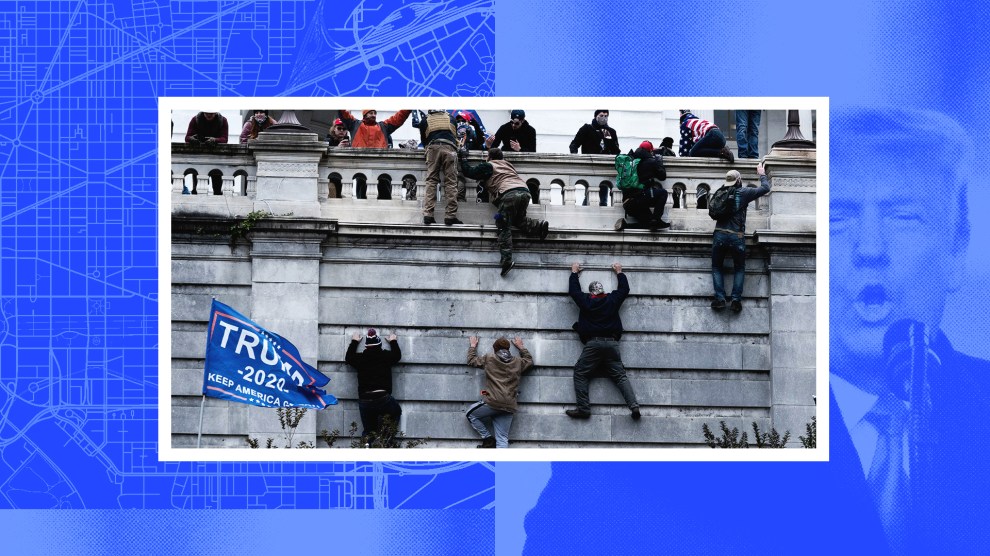 When it comes to one of the most—or perhaps the most—important elements of the January 6 tragedy, the House select committee investigating the matter was largely not needed. The whole world already knows what Donald Trump did while the armed mob that he summoned and directed to the Capitol was savagely assaulting law enforcement officers, ransacking Congress, and trying to defeat the constitutional order: nothing.

Usually an investigation needs to determine who did what and when, but in this instance the basic story is already established. For a long stretch of the insurrectionist attack, Trump took no steps to halt it or to protect the police battling the fight-for-Trump terrorists or the elected officials inside the building, including his own vice president. Perhaps Trump’s worst action throughout his whole effort to overturn the election, this profound dereliction of duty is undeniable. We all saw what didn’t happen. In full public view, Trump did not abide by his oath of office and failed to defend the Constitution and the US government. No subpoena nor any testimony is necessary to prove this fundamental truth.

Yet, the January 6 committee on Thursday night disclosed new details that rendered the picture of Trump’s worst day as president even worse. It revealed that from the time he returned to the White House after spreading his Big Lie at a rally—and being prevented by the Secret Service from joining the armed mob heading to the Capitol—he ensconced himself in his West Wing dining room for hours. There he watched the riot on Fox News and made not a single call to the military, law enforcement, or Washington, DC, government officials. He rejected numerous pleas from aides, advisers, Republican members of Congress, and family members (Ivanka and Donald Jr.) to intervene and call off the insurrectionists rampaging in the Capitol. Instead, he phoned Republican senators, as part of his scheme to forestall certification of the electoral count. And he spoke at least twice with Rudy Giuliani, his consigliere.

About what? That’s not known. But it’s a good guess that it was about how the riot could be exploited to halt or delay the certification. The committee also noted that there are no official records of what Trump did during these hours and no call records document who else he spoke to. (The committee learned about the Giuliani calls from the lawyer’s own phone records.)

Through assorted testimony and evidence, the committee made it plain: Trump purposefully did nothing to end the raid. He wanted the violence at the Capitol to continue. As Rep. Adam Kinzinger (R-Ill.) put it, “President Trump did not fail to act [on January 6]… He chose not to act.” Kinzinger and other committee members noted there can be no greater indictment of a president than that he refused to defend America’s own government.

In one of its reveals, the committee showed outtakes of an address Trump filmed on January 7. In a chilling moment, Trump refused to acknowledge the fundamental reality, even after all of the horror at the Capitol. “I don’t want to say the election is over,” he asserted, as he struggled to get through statements scripted for him and intended to be conciliatory. Some lies are too big to give up.

Donald Trump on January 7: "I don't want to say the election is over." pic.twitter.com/sgAXtBCIo8

Trump scandals tend to be like blood splatters at the scene of a violent crime. They’re messy because they are comprised of not one distinct act of wrongdoing but multiple and overlapping improbities—some committed in full public view, some conducted in secrecy—that blur together. The final report of special counsel Robert Mueller contained almost too many instances of alleged obstructions of justice committed by Trump. The excesses of his malfeasance make it difficult to keep track of all his misdeeds. And he benefits from the diffusion of attention caused by the dizzying scandal-within-a-scandal chaos he causes. This is why House Democrats were delighted during the first Trump impeachment to have a single and straightforward episode to focus on: Trump’s mobster-like phone call with Ukrainian President Volodymyr Zelenskyy. (“I would like you to do us a favor.”) It was an easy-to-follow extortion attempt, they thought.

Trump scandals tend to be like blood splatters at the scene of a violent crime.

Trump’s performance—his inaction—on January 6 stands out within his war on democracy as an act of historic ignominy. “No ambiguity, no nuance,” Rep. Liz Cheney (R-Wyo.) declared of this moment.

Those few hours alone were grounds for impeachment and complete political disqualification. But they occurred within a parade of misconduct: Trump’s relentless lies about the election; his promotion of conspiracy theories; his attempt to muscle the Justice Department into declaring the election results corrupt; his efforts to press state election officials and legislators (“I just want to find 11,780 votes”); his involvement in the fake-elector scheme; his attempt to name a nutty conspiracy theorist (Sidney Powell) special counsel; his pressuring Mike Pence to improperly block the certification of the electoral votes; his incitement of an armed crowd; and more. Refusing to intervene during an act of civil warfare was another item on the list of Trump’s deplorable deeds. But the committee showed how singular this episode was.

Overall, the committee has done an exceptional job of conveying the full tale of Trump’s attempted coup. It reaffirmed important elements already in the public record: Trump was repeatedly informed by his own advisers and state officials that the election results were legitimate. Trump appointees resisted his underhanded effort to overturn the election results. Various House Republicans colluded with Trump to subvert the election so he could retain power. Trump brought nutty conspiracy theorists and far-right extremists into the White House to plot unconstitutional schemes to remain in the White House.

Throughout its hearings, the committee has also presented many new facts about January 6: Giuliani acknowledging to Rusty Bowers, speaker of the Arizona House, that he had no evidence of significant election fraud; Trump being informed that the crowd at his rally included supporters who were armed and still directing that crowd to Capitol Hill; Mark Meadows, then the White House chief of staff, not pushing Trump to take decisive action during the riot.

The committee also excavated other possible instances of serious wrongdoing: Trump allegedly attacking a Secret Service agent when he was prevented from joining the mob heading toward Congress; the Secret Service deleting text messages for a time period that included January 6; and perhaps witness tampering.

The hearings have reminded Americans of the danger Trump posed—and still poses.

Under the leadership of Rep. Bennie Thompson (D-Miss.) and Cheney, the committee has laid out clearly Trump’s autocratic connivances to sabotage the American political system. It has broken down this affair into discrete components—each one a scandal of its own. None of this is likely to convince most Trump diehards to follow the example of Stephen Ayres, the Trump devotee who was arrested on January 6 and who last week testified that he has since taken off his blinders and realized that the former president had misled him and tens of millions of others with his false claims of a stolen election. But the hearings have reminded other Americans of the danger Trump posed—and still poses.

Ultimately, the January 6 investigation is not a battle over facts but over reality. The committee, however, has advanced the story, as we journalists say. More importantly, it has confirmed what most Americans saw with their own eyes: Trump and his minions conspired to destroy democracy. He and his crew won’t acknowledge this. But a boost for reality-based Americans is a public service.

The committee has more work to do. There will be additional hearings in September and, presumably, more disclosures—and a final report at some point. There may be criminal referrals. But the panel has completed much of its main task: documenting and safeguarding the truth. As Cheney noted, “We cannot abandon the truth and remain a free nation.”

All this work now leads to a big question: What do we do as a nation with the truth? Can we handle it? At the start of Thursday night’s hearing, Thompson declared “there needs to be accountability…for every part of this scheme.” But how? That part of the story has yet to be determined.