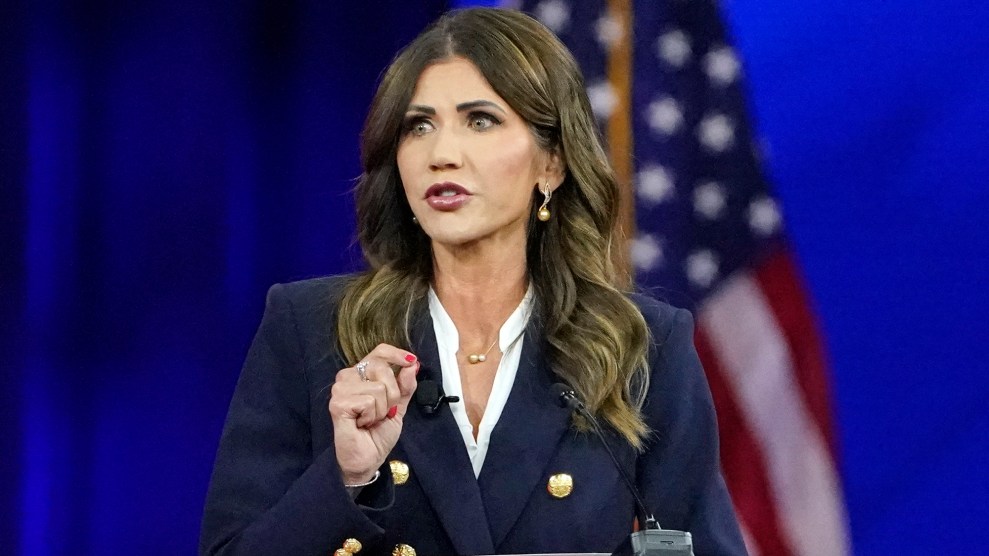 As soon as the Supreme Court overturned the precedent in Roe v. Wade guaranteeing the constitutional right to an abortion, a South Dakota “trigger law” took effect, banning abortions in the state except “to preserve the life of the pregnant female.” Gov. Kristi Noem celebrated the decision and vowed to “do what we can to help mothers in crisis know that there are options and resources available for them. Together, we will ensure that abortion is not only illegal in South Dakota—it is unthinkable.”

On Sunday, Noem, who is running for re-election and won the Republican primary nomination last month, appeared on CNN and made clear that any empathy she might have for “the pregnant female” is merely rhetorical. The Indianapolis Star had reported on a case in which a 10-year-old from Ohio—where a six-week abortion ban went into effect hours after the Supreme Court ruling—had to cross state lines for an abortion after being raped. (The child was six weeks and three days pregnant.) CNN’s State of the Union host Dana Bash asked Noem whether South Dakota would force a 10-year-old in such a situation to carry the baby to term. Rather than condemning the notion, Noem replied that “every single life is precious,” and that, “in South Dakota, the law today is that abortions are illegal except to save the life of the mother.”

Pressed further, Noem said only “that story will keep me up at night” and “I don’t think a tragedy situation should be perpetuated by another tragedy.” South Dakota was among 13 states with trigger laws on the books designed to immediately ban abortions if Roe were to be overturned. On Friday, Noem signed an executive order banning telemedicine abortions, further restricting access to abortion services in the state.

Barbaric. To force a raped 10-year-old to give birth. This is Taliban-style fundamentalism. https://t.co/2RdSXlDSL5

Noem isn’t the first Republican to support abortion bans even in cases of rape or incest. Mississippi House Speaker Philip Gunn recently said a 12-year-old girl pregnant with a father or uncle’s child should still carry the pregnancy to term. Back in April, Rep. Jean Schmidt of Ohio referred to pregnancy from rape as an “opportunity for that woman, no matter how young or old she is.”

The Ohio case has drawn comparisons to one in Brazil involving a judge who repeatedly denied a 10-year-old rape victim an abortion—which is illegal there nationwide, except in certain circumstances, including rape. Children ages 10 to 14 are five times more likely to die during childbirth than women in their twenties are, according to the Washington Post. The Brazilian child’s ordeal foreshadows the reality of post-Roe America. “When there is a state of judicial insecurity, as we see now in the United States, with each state deciding its own policy, that insecurity creates a space ripe for misinformation and fear,” Debora Diniz, an anthropologist at the University of Brasilia and reproductive rights expert, told the Post.