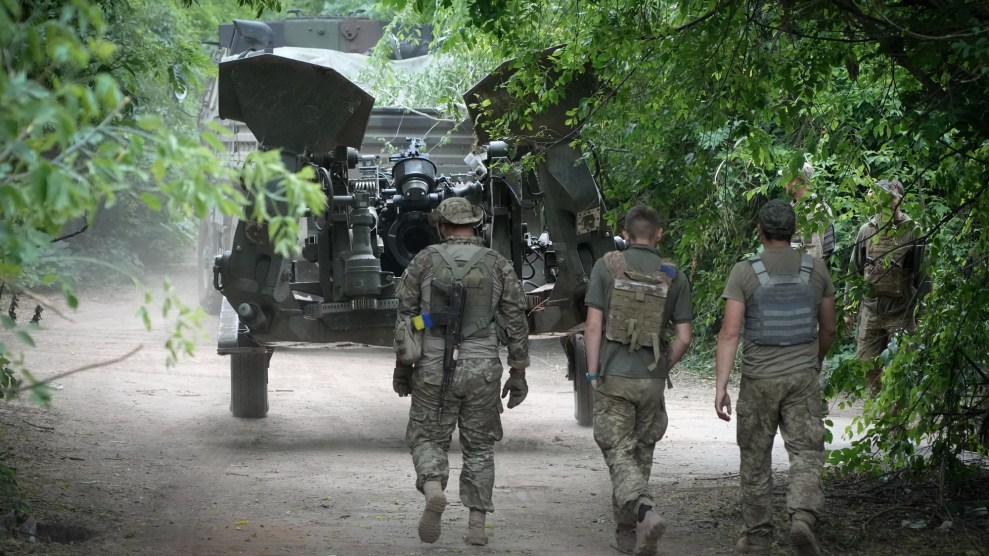 Two prominent figures have resigned in protest from the Quincy Institute for Responsible Statecraft—one of the only major think tanks to promote a skeptical view of US power and military interventionism. In announcing their departures, Joe Cirincione and Paul Eaton criticized the organization’s dovish response to the Russian invasion of Ukraine.

“This is a completely unjustified, unprovoked invasion of a sovereign state. There was no justification for this,” Cirincione said in an interview Thursday with Mother Jones. “And yet Quincy keeps justifying it.”

“This is a completely unjustified, unprovoked invasion of a sovereign state…And yet Quincy keeps justifying it.”

Cirincione, who was until recently a “distinguished non-resident fellow” at Quincy, tweeted news of his resignation on Thursday, citing the institute’s “position on the Ukraine War” as his reason. Formerly the head of the Ploughshares Fund, an influential grant-giving foundation in the small progressive foreign policy world, Cirincione helped raise money for Quincy in its early days and connected it with key donors. But Ukraine proved to be his breaking point.

In articles posted online and in media appearances, other Quincy experts have called for the Biden administration to press Ukraine to reach a peace deal that allows Russia to keep some of the territory it has seized, arguing the alternative is a prolonged war and increased risk of direct conflict between the United States and Russia. That position has little public backing from prominent Democrats in Washington, who support the administration’s efforts to aid Ukraine’s military.

In an interview Thursday night, Cirincione said he “fundamentally” disagrees with Quincy experts who “completely ignore the dangers and the horrors of Russia’s invasion and occupation and focus almost exclusively on criticism of the United States, NATO, and Ukraine.”

Cirincione’s exit comes just days after Eaton—a retired Army major general who has long been an adviser to Democratic politicians and liberal advocacy groups—resigned from Quincy’s board for similar reasons. When asked why he left the organization, Eaton said on Twitter, “I support NATO,” an apparent reference to the strain of thought among anti-interventionists that Russia’s invasion was motivated by the expansion of the NATO alliance.

The fissures within Quincy reflect a deeper conflict among skeptics of US military power. Russia’s invasion of Ukraine has exacerbated that conflict, with some backers of the Biden administration’s Ukraine policy accusing critics of being Putin apologists.

For Cirincione, the Ukrainian resistance to Putin’s unprovoked invasion “is a just war” deserving of US financial and military support. He disputes the view that the United States is engaged in a proxy war with Russia or attempting to “bleed Russia dry.” (Many international relations experts, not just at Quincy, have said the conflict is edging closer to a proxy war.)

Trita Parsi, the co-founder and executive vice president of the Quincy Institute, called Cirincione a friend, but said that Cirincione’s criticisms were “not only false but bewildering.”

“A quick glance at our website would show that that statement is just simply not true,” Parsi said. “It is true that we are pushing for diplomatic solutions. We are not going along with the idea that it’s a good thing to change the objectives in Ukraine towards weakening Russia, because we believe that could lead to endless war.”

Parsi said that Cirincione had been encouraged to disagree—in private and and in public—with other Quincy experts. But Cirincione “wanted Quincy as a whole to adopt his position,” Parsi said, adding that such a move would be incompatible with the think tank’s mission and not “necessarily compatible with progressive foreign policy either.”

“It is true that we are pushing for diplomatic solutions.”

A particularly knotty issue for some progressive thinkers is the question of military aid, which is the main forum through which the United States has supported Ukraine. Matt Duss, a foreign policy adviser to Sen. Bernie Sanders (I-Vt.), used a recent piece in the New Republic to appeal to progressives on this point, arguing that the Left should not let prior US misadventures abroad “blind us to the instances when provision of military aid can advance a more just and humanitarian global order.”

There is not much division among congressional Democrats on that question. Not a single Democrat in the House or Senate voted against President Joe Biden’s request for $40 billion in weapons and humanitarian aid for Ukraine. But outside of the Democratic Party, a collection of prominent figures spanning the progressive left and libertarian right have been vehemently opposed to such a huge aid package, which is one of the largest sums of foreign aid in US history.

Many of these critics view the source of the conflict as broader than Putin himself. Taking their lead from John Mearsheimer, an influential international relations professor and non-resident fellow at Quincy, they argue that the United States gravely miscalculated at the end of the Cold War by expanding NATO to include several Eastern European countries that were once part of the Soviet Union. Mearsheimer has argued that the US government should have expected Russia to perceive the expansion of NATO as a security threat.

Many of these critics do not think the US government’s aims in Ukraine are necessarily noble. As examples, they have seized on comments from Secretary of Defense Lloyd Austin, who said that he wants to see Russia “weakened,” and media leaks that claiming that US intelligence is helping Ukraine kill Russian generals. (“I think the Biden administration has done an exemplary job of aiding Ukraine, but it’s not flawless,” Cirincione told Mother Jones.)

While functionally a debate about means and ends—no different from many arguments in the national security space—the fractious conversation about Ukraine on the Left also speaks to the kinds of questions that remain out of bounds in the elite world of US foreign policy. Quincy was a unique entry in to the debate from the start. The institute is proudly not progressive; it prefers to call itself “transpartisan.” Its experts often align with the anti-militarist worldview shared by many progressive Democrats and libertarians, a coalition that is reflected in the organization’s primary funders: George Soros and Charles Koch.

Outside of Quincy, there is not much money on the anti-militarism side, making the institute even more important as a rare voice of dissent from foreign policy orthodoxy. Even as figures like Cirincione and Eaton find substantial support from Democrats in Congress, their views have encountered backlash among the wider progressive community. Whether there continues to be room for a progressive foreign policy that includes skepticism of NATO expansion or the wisdom of a prolonged war against Russia is still an open question. For Cirincione, there remains a glaring need for a truly progressive think tank. “A lot of us thought Quincy was going to be it,” he says. “But it’s just not.”