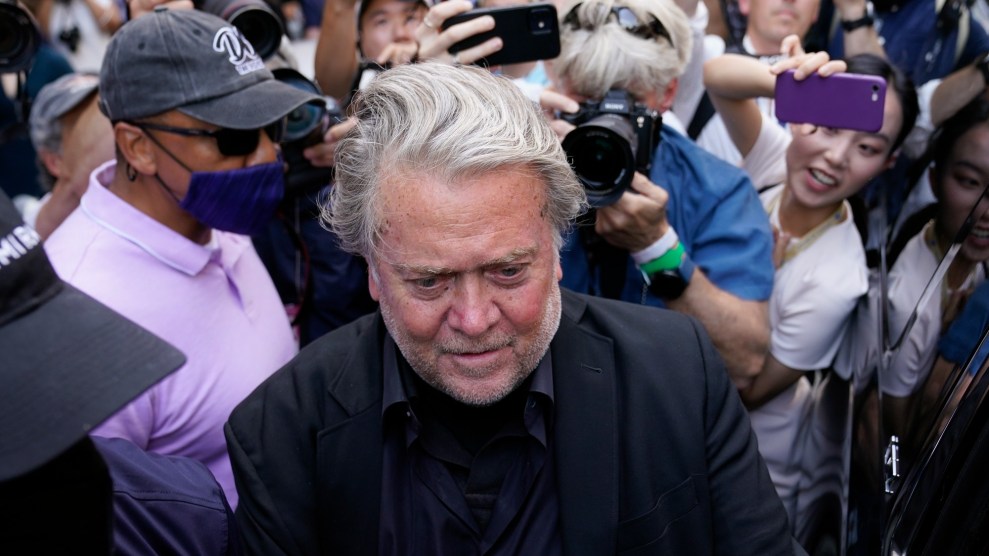 Former Trump adviser Steve Bannon was convicted Friday of defying a subpoena from the congressional committee investigating the January 6 insurrection. For all the sound and fury from Bannon about Justice Department overreach, the case wrapped with an almost inhuman speed. A jury in Washington, DC only had to deliberate for less than three hours before finding him guilty on two counts of contempt of Congress.

For months, Bannon had refused to provide documents to the committee or submit for a deposition despite being central to many of the key events prior to the insurrection.

As Mother Jones reported last week, Bannon was recorded prior to Election Day predicting that former President Donald Trump would falsely declare victory. On his podcast, War Room, he has also repeatedly accused Joe Biden of being an illegitimate president and said “stolen elections have catastrophic consequences.”

Yep, that was our scoop you just heard as Liz Cheney closes the #January6thHearings.

Reporter @dfriedman33 got ahold of leaked audio of Steve Bannon confirming Trump had a plan to declare electoral victory, even if he was losing. Listen here:pic.twitter.com/ARr3M4qAjH

As satisfying as Bannon’s critics may find his comeuppance after his bravado-soaked press conferences and vow to make his trial into “the misdemeanor from hell” for the Biden administration, it’s worth recalling this verdict is about a lot more. The conviction is a boost for the January 6 committee and the ability for Congress to conduct oversight.

Bannon claimed that he could simply refuse to respond whatsoever to a lawful subpoena by asserting that Trump had instructed him to assert executive privilege over Bannon’s testimony and documents—even though Bannon was not a White House employee, and hadn’t worked there for more than four years when he refused to testify.

Bannon basically offered the committee a big f-you, emulating the swaggering “suck on that” tactics his former boss has used to ignore laws and norms alike. Indeed, Trump’s blanket claim of “absolute immunity” during the 2019 investigation that preceded his first impeachment led many Trump aides at the time to flatly refuse to cooperate at all with Congress. (Trump unsuccessfully tried to use the same claim to avoid potential liability in civil suits stemming from January 6.)

Left unchecked, similar moves would leave Congress unable to carry out basic oversight of the executive branch (or coup attempts by defeated presidents). And that’s exactly what Bannon, and colleagues like former White House aide Peter Navarro, who also faces contempt charges, hoped would happen. That idea, that witnesses can simply blow off Congress with magical “privilege” claims, is not dead, but it took a big hit Friday—as did Bannon’s spurious attempts to wave away his own legal predicament.

Unless he benefits from some eleventh-hour reversal by an appeals court, Bannon faces up to two years in prison and, this time, he won’t have a president in power to pardon him.