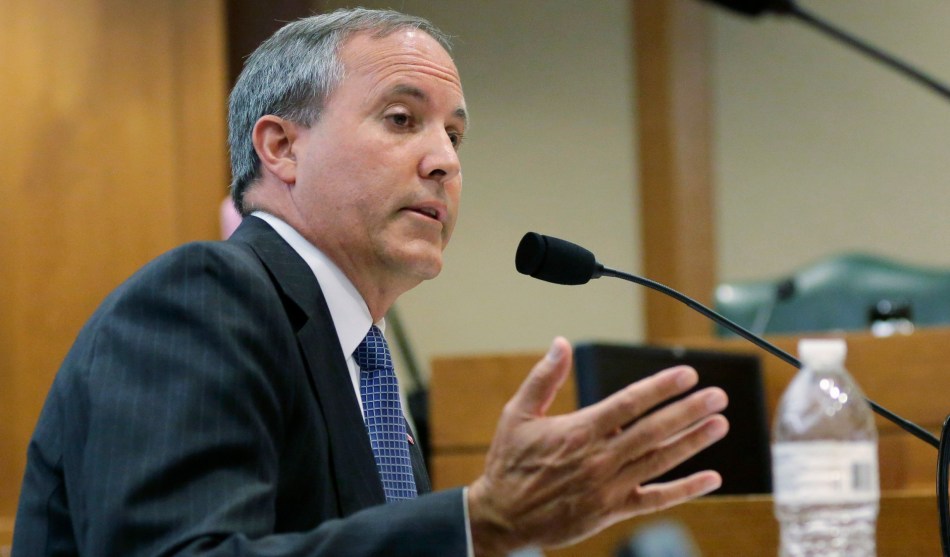 This article was produced by Reveal from the Center for Investigative Reporting, which is a nonprofit investigative newsroom. Sign up to get their investigations emailed to you directly.

Texas Attorney General Ken Paxton is pretty familiar with Catherine Engelbrecht. He’s been a guest on her podcast, chatting about their shared passion: rooting out voter fraud. They both have gone to great lengths to try to support former President Donald Trump’s lie that the 2020 election was stolen.

And when Engelbrecht, founder of the nonprofit True the Vote, has found herself in hot water, Paxton’s office has turned out to be a helpful ally.

Most recently, a state judge sided with Engelbrecht’s argument that it should be Paxton’s office—not a court—that should probe allegations made by a True the Vote donor who says he was swindled out of $2.5 million.

But more than a year after the case was dismissed, Paxton’s office won’t say whether it ever investigated the donor dispute. Last month, Reveal from The Center for Investigative Reporting found that True the Vote had engaged in a series of questionable transactions that sent more than $1 million to Engelbrecht and other insiders while failing to back up its voter fraud claims. 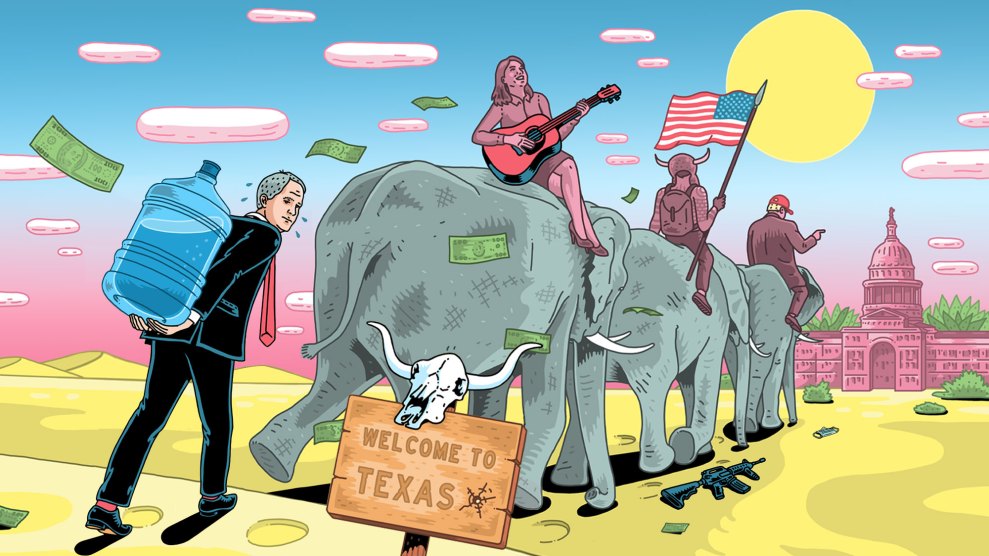 In the reporting of that story, Paxton’s office withheld financial documents and email communications from Reveal and issued contradictory and inaccurate statements about the nonprofit, which has been a leading voice in driving the voter fraud movement from the political fringes to the core of GOP ideology.

The embattled attorney general this year skated through a contested primary race. But he faces potential disbarment for attempting to overturn the 2020 presidential election results, is under investigation by the FBI, is getting sued by whistleblowers in his office, and awaits trial for a seven-year-old felony indictment for securities fraud. In their lawsuit, former staff members have accused him of using his office to provide legal favors to an ally, saying he appointed a special prosecutor to target adversaries of a donor who was under investigation.

His office advocated on Engelbrecht’s behalf before the Texas Supreme Court in 2016 when she got into legal trouble with her previous nonprofit organization, King Street Patriots, for being overtly political. He appeared on her podcast in July 2020, during which Engelbrecht said she considers Paxton a friend.

“I can’t say thank you enough for the dignity and the respect that you bring to that office,” she said.

“I feel blessed to have this opportunity, especially in a time like this. It’s really a crisis,” Paxton replied.

Months later, the two went to extraordinary lengths to support Trump’s lie that the 2020 election was stolen. Paxton filed a federal lawsuit on behalf of Texas seeking to overturn the election in key states where Trump had lost, a suit that the Supreme Court eventually dismissed because Texas had no legal standing to challenge other states’ results.

Engelbrecht, meanwhile, accepted $2.5 million from a major conservative donor to lead a legal and PR campaign to contest the election results. However, True the Vote quickly dismissed the lawsuits it filed and provided no evidence of voter fraud. The donor, Fred Eshelman, became disillusioned and sued True the Vote in rural Austin County, Texas, in February 2021 for misusing his donation.

Anytime a charity in Texas is sued, the state attorney general’s office is notified under law. On March 9, 2021, Assistant Attorney General Zeenia Challa wrote to the Austin County district clerk, notifying the court that the office learned about the dispute. Challa said she was “currently reviewing the documents provided in the proceeding to determine if Attorney General participation is warranted.”

On the same day, an attorney for True the Vote wrote to Challa that he anticipated that she would want to know “that the funds spent by this charitable organization are being spent consistent with the purposes for which the entity was formed.”

“You will see, if it comes to that point, that all of the expenditures of True the Vote have been made in order to evaluate, investigate and ultimately educate on the issues of voter integrity,” attorney Brock Akers said in the letter, which was produced in response to an open records request.

Neither court records nor records released by the attorney general’s office indicate whether Challa responded to letters from True the Vote’s attorneys.

On March 31, attorneys for True the Vote argued that the lawsuit did not have standing because it was a matter for the Texas attorney general’s office.

“Instead, the only true party in interest relative to money donated to this charitable organization is the State of Texas, as represented by the Attorney General,” True the Vote argued, according to court records.

The Austin County judge agreed with True the Vote’s argument on April 8, freeing Engelbrecht’s nonprofit from the specter of having to return $2.5 million.

More than a year after the case was dismissed, Paxton’s office won’t say whether it ever investigated. And it refused to answer questions about whether it will examine the organization’s finances. Engelbrecht did not respond to questions related to her relationship with Paxton.

Eshelman has appealed the judge’s ruling.

As Reveal sought to better understand True the Vote’s finances and whether Paxton looked into the donor dispute, we requested various records related to the nonprofit, which are public records under the Texas Public Information Act and held by the attorney general’s office. We also requested internal attorney general communications about True the Vote.

In response to the request for the records, Assistant Attorney General June Harden said True the Vote was no longer a charity and closed the request without turning over any documents. When pressed on the decision, Harden later said she “misspoke.” Indeed, records with the state indicate True the Vote is an active charity. The request was reopened.

As is the case in many states, the Texas attorney general can keep records of nonprofits, like their tax filings. The attorney general’s office first said it did not have True the Vote’s tax filings, then later acknowledged it had the nonprofit’s 2019 return but refused to release it. To make its case, it cited a general statute that says tax returns are confidential for the average person.

Joe Larsen, a First Amendment attorney and board member of the Freedom of Information Foundation of Texas, said that statute didn’t apply. “That’s the kind of information that’s supposed to be available to the public,” Larsen said. The attorney general’s office “has no basis for withholding that.”

In Texas, it’s usually possible to appeal records decisions made by public agencies. However, the attorney general is the party that decides on the appeal.

Ultimately, we received versions of True the Vote’s tax returns from other sources, and they show a series of questionable financial transactions.

At one point, Engelbrecht provided Reveal with a copy of the 2019 tax return that was significantly different from the version on the IRS website. The IRS version showed that True the Vote had loaned her more than $113,000; the version provided to Reveal didn’t list that information. The two versions listed different board members as well.

It’s commonplace for law enforcement agencies to not comment on pending investigations, but in other cases, Paxton has publicly acknowledged when he’s investigating a charity.

The Texas State Bar in May filed a lawsuit against Paxton for falsely saying he’d uncovered evidence that cast doubt on the 2020 election result. Paxton could face a reprimand or have his legal license revoked.

“Texas Bar: I’ll see you and the leftists that control you in court,” Paxton said in response.

Paxton announced his office was investigating the Texas Bar Foundation, which is the nonprofit arm of the State Bar that offers legal services and education. He claimed the nonprofit was “facilitating mass influx of illegal aliens” by donating money to groups that “encourage, participate in, and fund illegal immigration at the Texas-Mexico border.”

While Paxton has remained silent on True the Vote, the nonprofit’s research grabbed attention during the hearings of the Select Committee to Investigate the January 6th Attack on the U.S. Capitol.

In a video shown during the second hearing last month, former U.S. Attorney General Bill Barr mocked the film “2000 Mules,” which used True the Vote’s claims that anonymized cellphone data around ballot drop boxes pointed to “ballot harvesting.” That’s when a third party – like a household member, activist group, or nursing home – collects and submits absentee ballots on behalf of others, which is legal in a majority of states.

In his videotaped testimony, Barr said True the Vote’s data and video evidence were “lacking.”

“My opinion then and my opinion now is that the election was not stolen by fraud,” Barr said. “And I haven’t seen anything since the election that changes my mind on that, including the ‘2000 Mules’ movie.”

He broke out in a laugh.

“Bill Barr, we are coming for you, bro,” Bannon said. Engelbrecht nodded her head.

“Beware the fury of a risen people, this is not going to go well if they continue to push this aside,” Engelbrecht said.

In the weeks following the film’s May 7 release, Engelbrecht has hosted a series of question-and-answer forums. However, she engages only with people who pay to subscribe to her content creator platform on Locals.

Several commenters recently asked Engelbrecht when she planned to release the voter fraud evidence following the debut of “2000 Mules.” She did not address a specific date.

Engelbrecht, arriving late to a recent livestream and from her car, read aloud from a lengthy commenter’s post about election fraud that went on to say: “I’m not happy about being scammed by True the Vote. And given the apparent holes in the arguments and perhaps the shadiness of the graphics, I certainly cannot publicly endorse ‘2000 mules.’ ”

“This one would have been a fun question to start from the bottom and read up,” she said.

“Sorry you didn’t like the movie and that you didn’t like the graphics. Take that up with Dinesh,” Engelbrecht said, referring to director Dinesh D’Souza. “And if you feel like you’re being scammed, then why are you on this Locals channel? You had to subscribe to even ask the question. That’s your choice.”