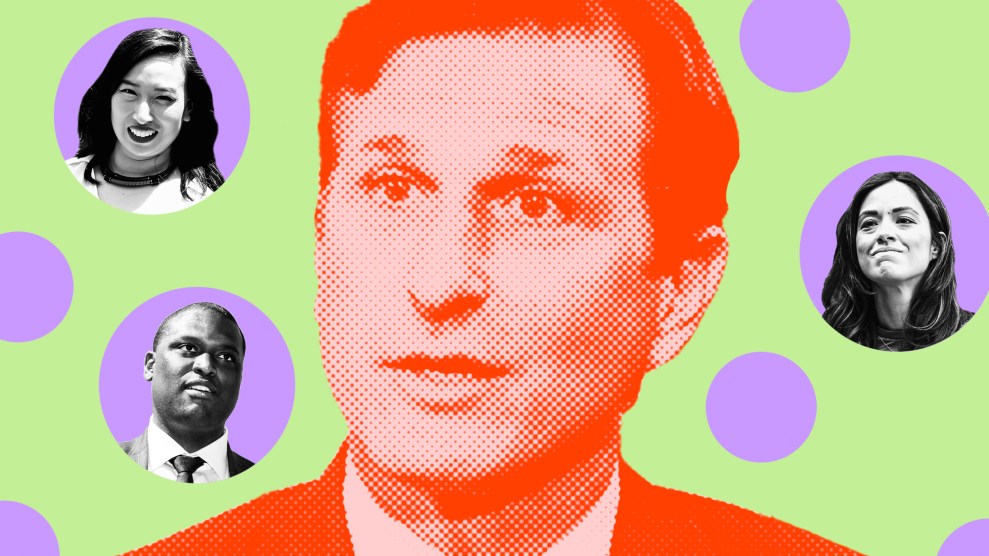 Dan Goldman—an heir to the Levi Strauss fortune, former federal prosecutor, lead counsel during Donald Trump’s first impeachment, and MSNBC analyst—is now the Democratic nominee to represent a congressional district that stretches from lower Manhattan to south Brooklyn. The first-time candidate is all but guaranteed to win the general election come November.

Goldman prevailed thanks to a key New York Times endorsement and millions of dollars of his own money. In an unusually competitive and diverse field, Goldman was the rich white guy. He defeated Rep. Mondaire Jones, a Black freshman Democrat endorsed by House Speaker Nancy Pelosi; Carlina Rivera, a Latina city council member who grew up in the district; and Yuh-Line Niou, a Chinese-American assemblymember backed by the New York Working Families Party and the main target of attack ads funded by the American Israel Public Affairs Committee (AIPAC).

As of early Wednesday morning, Goldman has 25 percent of votes, which puts him 2 percent ahead of Niou. Despite losing to Niou in Brooklyn, he managed to win by building a 13-point lead in lower Manhattan. Jones and Rivera are further behind with 18 percent and 16 percent of the vote, respectively. In total, only about 70,000 people voted in a primary whose late summer date was expected to depress turnout. Their votes will determine who represents more than 700,000 people.

Goldman positioned himself as a defender of democracy by highlighting the work he did to help impeach Trump in 2019 for the former president’s efforts to get Ukraine to investigate Joe Biden in the lead up to the 2020 election. He spent nearly $5 million of an inheritance worth up to roughly $250 million to get that message across. (As a resident of the district, I can confirm that his mailers arrived early and often.)

There is little doubt that Goldman worked hard in Washington to protect American democracy from Trump’s efforts to corrupt it. At the same time, he used a fortune that dates back to the Gold Rush to secure a louder voice than opponents like Rivera, who grew up in Section 8 housing with a single mother from Puerto Rico. As of August 3, Goldman’s personal contributions to his campaign came to more than four times all of the donations to Niou combined. If that counts as defending democracy, the phrase might not mean all that much.

On Tuesday night, AIPAC revealed that it had spent $350,000 attacking Niou. The move came in response to Niou saying she supports the Boycott, Divestment, Sanctions movement targeting Israel. Overall, the group has spent millions this year taking down progressive primary candidates through its United Democracy Project super-PAC.

Almost everything about the primary was unusual. In April, New York judges ruled that the original maps drawn by Democrats were unconstitutionally gerrymandered. A judge then pushed the primary to August and approved a new set of maps. The new lines pitted Jones against Rep. Sean Patrick Maloney, the chair of the Democratic Congressional Campaign Committee. Rather than challenge Maloney, Jones moved to Brooklyn to run in the newly drawn 10th district, which includes some of Manhattan’s most expensive zip codes, Brownstone Brooklyn, and the working-class immigrant enclave of Sunset Park.

Jones, who is 35, had been a rising star in the Democratic Party. Like Rivera, he’d grown up in Section 8 housing with a single mother. He then went on to Stanford and Harvard Law before becoming one of the first openly-gay Black members of Congress. But his decision to move to Brooklyn contributed to the district’s more left-leaning vote being split three ways. In total, nearly 60 percent of voters backed Jones, Rivera, or Niou, although Goldman was surely the second choice for some of them.

Rivera positioned herself as a pragmatic progressive who was willing to make tough choices when it came to things like New York’s housing crisis. Along with supporting upzoning in and around SoHo, Rivera backed a plan to build housing for low-income seniors on what is now a community garden in a wealthy part of Manhattan, the Times metro desk reported. Niou sued to stop that housing from being built, a move that cost her the support of former city council member Margaret Chin.

Niou, who grew up in Oregon, moved to New York in 2010 and was elected to the assembly six years later. In Albany, City & State called her “a leading progressive voice” who was “[e]ver-present on social media.” During her congressional campaign, she positioned herself to the left of Rivera and Jones, and secured the Working Families Party’s support in the process.

The Times’ endorsement of Goldman made no mention of Rivera or Niou. Instead, the editorial board praised Goldman for pledging to put his “considerable wealth” in a blind trust and explained that those “who have worked with Mr. Goldman behind the scenes described him as diligent and prepared and a person of integrity.” New York magazine provided a helpful translation: “Queries within the alumni networks of Sidwell Friends, Yale, and Stanford Law, from which Goldman graduated, turned up good reports and no scandals.”

The Times did not disclose the many ties between Goldman’s family and the Sulzbergers—the dynasty that has published the Times for six generations. Those connections, which were detailed in a joint article from the Intercept and the American Prospect, sparked a backlash online. In response, a Times spokesperson said that its endorsement was based on merit and that publisher A.G. Sulzberger does not personally know Goldman. But the spokesperson acknowledged that the editorial board ultimately answers to Sulzberger, who has many reasons to be sympathetic to Goldman.

Regardless of how the endorsement came about, it likely made the difference. As a result, Goldman will soon become one of the richest members of a body in which the majority of legislators are already millionaires. For his part, Goldman has said that he has a “deep appreciation for the opportunities my inheritance has provided me.” His opponents have every reason to feel differently.