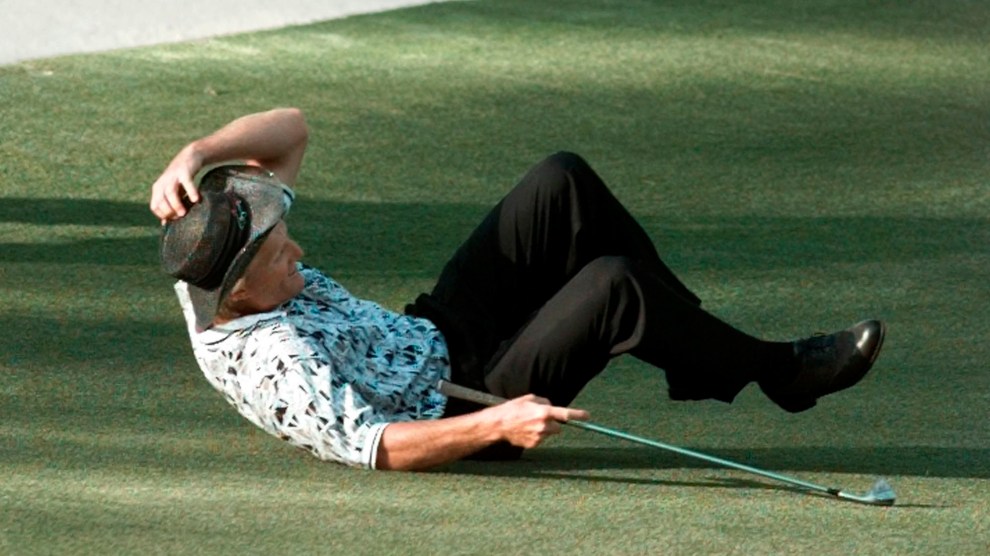 In 1996, Australian golfer Greg Norman went into the last round of the Masters with a six-shot lead. Over eighteen holes, he beefed it. Norman lost—badly. And he cemented himself as the premier choke artist of his generation. “Rarely has a world-class athlete,” the New York Times noted of Norman’s collapse at the time, “so thoroughly and publicly embarrassed himself.”

Ah, but here he comes again, trying to one up himself, going after his own record. Greg Norman wants to prove he is the “chronic choker,” the Times dubbed him. He is back out there, humiliating himself.

Norman is the head of the LIV, a new circuit of golf tournaments aimed at competing with The PGA Tour. The LIV says they’re trying to “modernize and supercharge” the sport. The competition announced its intention to be “golf, but louder.” LIV is not an acronym. It stands for 54, your score if you birdie every hole on a 72-par course. (Talk about exciting, Roman numerals.)

The LIV would matter as much as arena football except that the new tour is backed by Saudi Arabia’s Private Investment Fund. Top golfers, lured by massive pay, have quit The PGA Tour to cash in. Norman is CEO of LIV and has pitched it as a spokesperson, including going on Tucker Carlson. This isn’t new for him exactly, Norman has been talking about competing with the PGA Tour since the 90s. But this is the first time there is a legitimate challenger to The PGA Tour’s hegemony—despite the dismay of many (including families of 9/11 victims) who are upset about the blatant disregard for Saudi Arabia’s human rights abuses.

Recently, Rory McIlroy, one of golf’s biggest stars who has stayed with the PGA, went at Norman and his Saudi-funded LIV Golf Tour. McIlroy noted that he had just reached 21 PGA Tour wins, one above Norman’s all-time record.

Norman came back with this: “I take it as a compliment that Rory wanted to beat my 20 PGA Tour wins. His next goal should be to win more than 91 tournaments globally or to maintain number one in the world for more than 331 weeks.”

That is a very dumb thing for Norman to say. Yes, all of this is about a country that collects human rights violations like they’re Xbox achievements and Norman’s utter sellout choice to support said state. But even by the twisted logic of sports—which is often happy to ignore all manner of abuses in the name of money—Norman is wrong.

Because Greg Norman is a loser.

If you have even vaguely followed golf, you know how decadently rich it is for Norman to try to trash talk anyone else. The bulk of Norman’s brag is that he has 91 wins. Many of those victories are not worth even mentioning. In golf, there is PGA Tour and then a bunch of smaller global tours. You’ve probably never heard of them because they’re far less competitive and prestigious than the PGA. The partial exception to this is the European Tour which is not as competitive or noteworthy but is a clear second with some players crossing over to play events in both. McIlroy has the same amount of wins in Europe as Norman: 14. That means that the inflation is happening because 33 of Norman’s wins are from the PGA Tour of Australia, an obscure PGA Tour subsidiary. Norman is basically flexing on what are roughly equivalent to minor league home runs.

Norman claiming his 331 weeks atop the leaderboard would be impressive if hadn’t achieved it during the biggest dearth of talent in recent golf history. Norman came to the PGA Tour in the early 1980s, right as Jack Nicklaus was in the twilight years of his career and before Tiger Woods redefined the sport. Nicklaus had to compete against all-time greats like Arnold Palmer and Gary Player. Tiger Woods had Vijay Singh and Phil Mickelson. Norman was on top because he lived in a fallow period of talent. The tournaments where he fell apart saw him lose to Nick Faldo, Mark Calcavecchia, Paul Azinger—guys even a 57-year-old in a polo shirt who reads the Wall Street Journal every morning can’t remember.

In fact, Norman’s 331 weeks as number one are damning. It suggests that there weren’t particularly strong challengers, and still Norman was unable to secure a total PGA tour win count, or even major count, comparable to not just other dominant golfers, but the second, third, fourth, or even fifth most accomplished golfers of better eras. Mickelson had to play against Tiger almost his entire career and has still racked up 45 wins. Singh has 34 wins, while playing against Mickelson and Tiger. Lee Trevino, a likely unknown golfer to anyone who doesn’t follow the sport closely, had to play in the same era as Nicklaus and still walked away with 29 career PGA tour wins. In the interest of brevity, I left out all of the other examples of the fourth best guys of their own time being better than Norman. The point here is this dude blew it.

The greatest proof that Norman underachieved though is how many times he just fully choked when he finally had the chance to do something worthwhile. Norman doesn’t just have losses and missed opportunities. He has signature failures. His 1996 Masters performance regularly makes it onto greatest collapses in sports lists. Norman has topped rankings of the biggest chokes in golf history.

Few athletes have been granted as much good fortune as Greg Norman and even fewer have so spectacularly failed to capitalize on it. Eating shit at the highest levels would humble most of us sane and decent people, but not him.