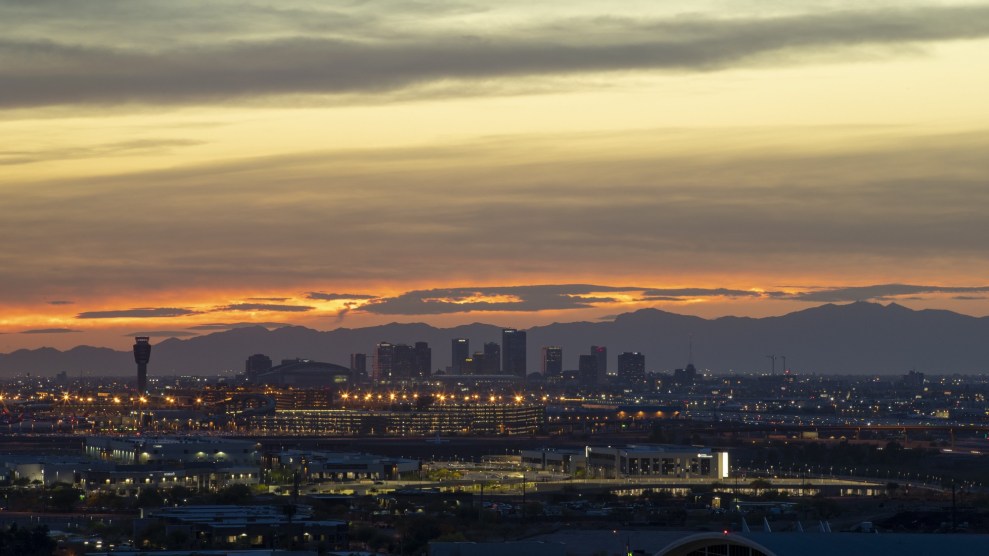 Phoenix is America’s hottest city, and it’s getting hotter. The global climate crisis and decades of sprawling urban growth have turned this desert city into a hazardous heat island with dwindling water supplies and inadequate shade.

An assortment of programs to cool down Phoenix and help people survive the heat have not been working: in Maricopa county, which includes Phoenix, record high temperatures contributed to at least 662 deaths between 2020 and 2021, while thousands more people needed emergency medical treatment.

David Hondula, a climate and health researcher at Arizona State University, was hired to lead the four-person team and coordinate the city’s immediate efforts to cut heat deaths and illness, and come up with ways to cool the city and make it more comfortable in the long term. It’s the first local government-funded heat team in North America, possibly the world. “It’s a long game—we’re fighting for small wins that we hope will accumulate into larger wins,” said Hondula. “We need to prepare for and recover from every summer, not occasional heatwaves.”

The Guardian spent a day with the Phoenix heat team during one of the hottest spells of the year so far.

In cities like Phoenix, heat and homelessness are a deadly combination.

The number of unsheltered people in the city has more than tripled since 2016, and the homeless population accounts for about 40% of heat deaths. Reaching unsheltered people when it’s very hot is critical to reducing the city’s death toll.

Four times a week, every Tuesday and Thursday morning and afternoon, a city outreach team hands out essential supplies—cold water, cooling towels, hats, and sunscreen—to anyone struggling outside. (They also provide supplies to faith groups and concerned citizens who have been doing this work for years.)

The outreach is coordinated by the heat office and the city’s volunteers program, with 120 sessions scheduled for this summer, compared with just eight or 10 in previous years. A case worker from the city’s homeless team is on every shift, to help connect people with information on services like emergency shelters, free medical care, shower facilities, and food—if they are ready. “Don’t assume what people want, keep it open-ended,” Victor Rojas, a case manager, told the volunteers.

The team can help organize transport to a nearby cooling center: there’s a network of city and non-profit spaces (libraries, churches, day centers, etc.) that mostly operate during business hours (rather than the hottest times of the day/night), and aren’t all that easy to find. Yet even though cooling centers have operated in the city for years, many people who need them—including first responders and convenience store workers who have regular contact with the most vulnerable people—have no idea where they are. Changing this through better messaging is something Hondula describes as “low-hanging fruit”—small interventions that could render big wins.

Deciding on the best outreach locations, however, is tricky as there are thousands of people sleeping in parks, under bridges, in parking lots, and in shop doorways all over the city. Police sweeps can force people to suddenly move, sometimes without their life-saving belongings like tents, sleeping bags, and clothes. It’s a work in progress, and back in city hall, Mary Wright, the team’s built shade researcher, uses data and spatial analysis to map the 911 heat emergency calls and intel from homeless groups, to check the team is hitting the right spots.

On the day of the Guardian’s visit, Joe Biden faced calls to declare a national climate emergency as more than a hundred million Americans were under heat advisories as record-breaking temperatures scorched large swaths of the country. Hondula was in high demand with journalists that day and took time out for three interviews. “If the lack of attention to heat as a hazard is one reason why it’s under-resourced nationally, then getting the word out is a good use of my time for our community and others.”

The climate crisis requires a coordinated global effort to slash greenhouse gas emissions, in order to avoid the most catastrophic consequences of global heating. As political leaders fight but fail to take urgent action, cities like Phoenix must find ways to adapt to and mitigate the impact of extreme weather. That means lots of meetings to share data, ideas, and solutions on how best to cool the city.

“We need so many trees for so many reasons, there is such a deficit here, but not all trees are the same.”

Top of the list is increasing canopy cover to cool the city, especially in the poorest mostly Black and brown neighborhoods, which have the fewest trees and most people without cars and air conditioning. Lora Martens, a landscape architect and expert in desert plants, is the team’s urban tree program manager, whose job is to work out the most effective and sustainable way to reduce the heat island effect and make people more comfortable. “We need so many trees for so many reasons, there is such a deficit here, but not all trees are the same. The hardest part is planting the right trees in the places that need them most. It’s not easy or cheap.”

Martens led the team’s first meeting on updating the city’s 2010 tree and shade master plan, which pledged 25% cover by 2030: no one is sure where that figure came from and what’s been achieved so far. More work needs to be done to ensure mass tree planting helps rather than worsens the region’s water shortages; also crucial is community outreach to understand—rather than assume—what people in tree-deprived neighborhoods want and need.

But it’s not all about trees: shade can also be engineered, so structures like awnings could be the more costly but best short-term solution to protect people quickly.

“In places that people need shade now, we can’t plant trees and hope they get to adulthood in 20 years,” said Mary Wright, the team’s built environment specialist.

In the long term, building codes will have to change. “In Phoenix, we’ve definitely lost touch designing for the climate over choosing cheaper solutions because we have air conditioning.”

As part of the city’s first heat response plan, the team will evaluate the 31 heat-related programs and services the city is involved in, from cooling centers and outreach work to cooling pavements and tree planting.

A big part of that is understanding what works and what doesn’t on the ground but as academics the team lack first-hand street experience. Now, after more than 30 three-hour outreach shifts under his belt, Hondula said: “I see the water and supplies as a Trojan horse, a way into a bigger conversation about what people need.”

Before heading out for the afternoon shift, Hondula participated in a webinar on drought and heat in the American west organized by Noaa and shared that heat-associated deaths and emergencies were actually trending higher than last year. Arguably every preventable death is a failure so this is shocking, but not all that surprising given the sharp rise in drug use, evictions, energy bills, and homelessness.

“Protecting people is not just about providing people with better weather information. If we want to focus on the big pieces of the pie in Phoenix, then drugs and housing are a lot of it,” he said.

In some ways, the buck now stops with him. “It’s motivation…the public health community says that heat-related deaths are preventable, there’s no asterisk or exceptions for high inflation or homelessness. We have to do more and we have to do better.”