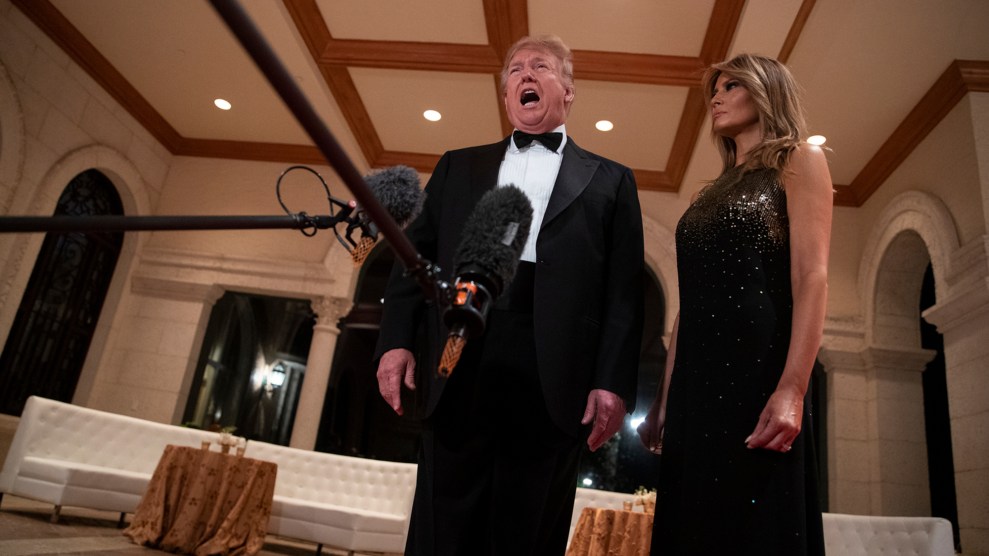 he former president, pictured here attending a New Year's Eve bash at his Mar-a-Lago complex in 2019, before he spirited reams of unsecured documents from the White House to the resort upon his ouster.Evan Vucci/AP

Donald Trump’s lawyers don’t seem to have much of a defense.

Just hours after the Justice Department released a heavily redacted affidavit revealing that investigators believed they would find “evidence of obstruction” at Trump’s Florida mansion, along with classified presidential records, Trump’s lawyers attempted to turn up the heat in court.

Trump’s team offered a supplement to an earlier, widely-panned filing asking a federal judge to appoint a so-called special master to review documents seized at Mar-a-Lago, Trump’s Palm Beach club and personal residence. The lawyers want the official appointed to assess if any of the material was covered by attorney-client privilege.

Technically, the new filing is not intended to address the issues raised by the newly released affidavit, including concerns that Trump’s document hoarding endangered clandestine intelligence sources, and fears that he might intimidate unnamed witnesses in the case. But, beyond the public griping of Trump fans who suggest laws shouldn’t really apply to a former president—not to mention Trump’s own rants—the filing is the only legal response from Trump’s team.

As Politico noted Friday night, the document is notable for what it doesn’t say. Trump’s lawyers do not repeat the claim pushed after the raid by loyalists that, prior to leaving office, Trump had a standing order to declassify all documents in his personal residence. There is no evidence such order existed, and Trump’s team has now stopped pursuing this argument. The filing doesn’t address DOJ’s concern that Trump and his aides misled them by claiming to have previously returned all the material they had. Nor does the filing detail any specific privileged material Trump’s lawyers believe was seized in the FBI raid.

Judge Aileen Cannon, the district court judge to whom Trump’s team is appealing (different from the magistrate judge who approved the search warrant), told them after their first filing that they needed to try again and explain “the precise relief sought.” But they didn’t really do that. Instead they complained that the affidavit gave them little new information, and that records Trump refused to return were covered by the Presidential Records Act, which they note “is not a criminally-enforceable statute.” So the raid was out-of-bounds, they suggest.

But the Justice Department obtained their search warrant by asserting they had probable cause to believe they would find violations of not only the presidential records act but other criminal statutes, too. In other words: Crimes. Those include violation of the Espionage Act, by illegally retaining national security documents, and obstruction of justice, which carries a penalty of up to 20 years in prison.