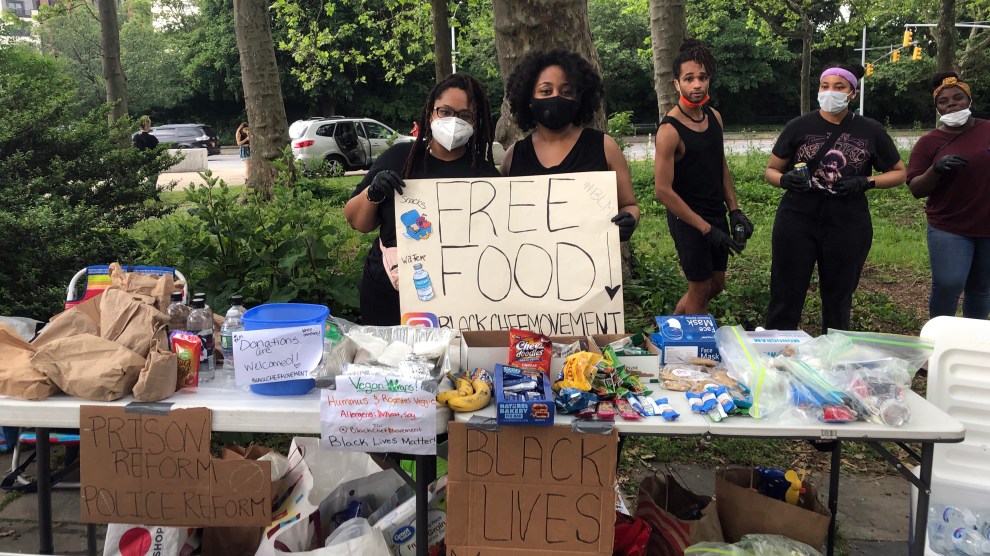 Melissa Vigilance, 25, normally works as a chef at a law firm. But since the outbreak of the coronavirus pandemic, she hasn’t been able to go into work. So she teamed up with six of her friends, all chefs in New York City, to feed the movement for racial justice.

“We started Feed the Movement NYC because a lot of chefs are out of a job,” Vigilance explained when I interviewed her for the new episode of the Mother Jones Podcast. “We wanted to provide food that’s nutritious, but also provides comfort for people who are out here spending their day yelling and fighting for us. This is our part to say thank you to them and be with them.”

Hear from Vigilance and her fellow chefs in this edition of the Mother Jones Podcast:

After the protests took off in Brooklyn, Vigilance set up a GoFundMe campaign to collect donations so the meals could be handed out to protesters for free. She and her friends arrived with boxes of provisions, including her homemade protein balls, gourmet sandwiches, water bottles, and energy drinks. “The great part about us being chefs is we’re able to make gourmet things that are portable, healthy, and easy to move around [with], that people will love,” she said. “It came out pretty easily.”

The killing of George Floyd has reignited a centuries-long fight for racial justice in the United States, sending hundreds of thousands of protesters out into the streets in more than 400 cities around the world over the past few weeks. This call for justice is made all the more complicated and crucial by a pandemic that’s disproportionately hit communities of color—and also the hospitality and restaurant industries. An estimated 417,000 restaurant workers lost their jobs in March, when restaurants and bars were first ordered to close. Now, some of New York’s 321,000 food-and-beverage industry workers who are out of work or working from home are channeling their energy and talent into this grassroots movement.

“A lot of us are home right now, not in our restaurants, so we’re able to use our talent to give back, to bring awareness to the cause,” said Kayla Davis, 28, another chef working to feed protesters.

Davis and McCallum were also out in Grand Army plaza this past weekend, handing out roasted vegetable sandwiches, grilled chicken wraps, nut-free cookies, fresh fruit, granola bars—and PPE.Davis is working with Rasheeda McCallum, 29, who she met when they were students at Johnson & Wales University, a culinary school in Providence, Rhode Island. Four days ago they started the Black Chef Movement, another GoFundMe food-centered campaign to sustain local anti-racism protesters. They’ve raised over $8,000 in that time. “We wanted a way to keep everybody nourished and encouraged while they’re out here,” said Davis. “We’re trying to inspire, uplift, and support through food, which is our passion.”

“We’re here to be there for our brothers and sisters on the front lines,” McCallum said. “We figured if we show up and we can nourish them, then they’ll keep going, and the things we need done will definitely get done.”

At the same time, to the side of the main plaza, Sebastian Jaramillo, 31, was handing out empanadas. The co-founder of Empanaderia, a Brooklyn-based catering company that normally delivers empanadas throughout the city, Jaramillo was busy earlier in the week providing supplies and food to protesters as they got out of jail. By giving free food to protesters and collecting donations to buy more supplies for the protests, Jaramillo has found a way to use his business to help a cause he cares about. Empanaderia is also matching donations that people make through its website.

“We’ve been out here giving out more than a thousand empanadas,” Jaramillo said. “We’re doing out best to support local businesses, support the protests, and get police to stop killing us.”

He added, “We’re happy to be out here with everybody to fight the good fight.”

Correction: This story has been updated to reflect that donations to Empanaderia are being used to buy more supplies for the protests.