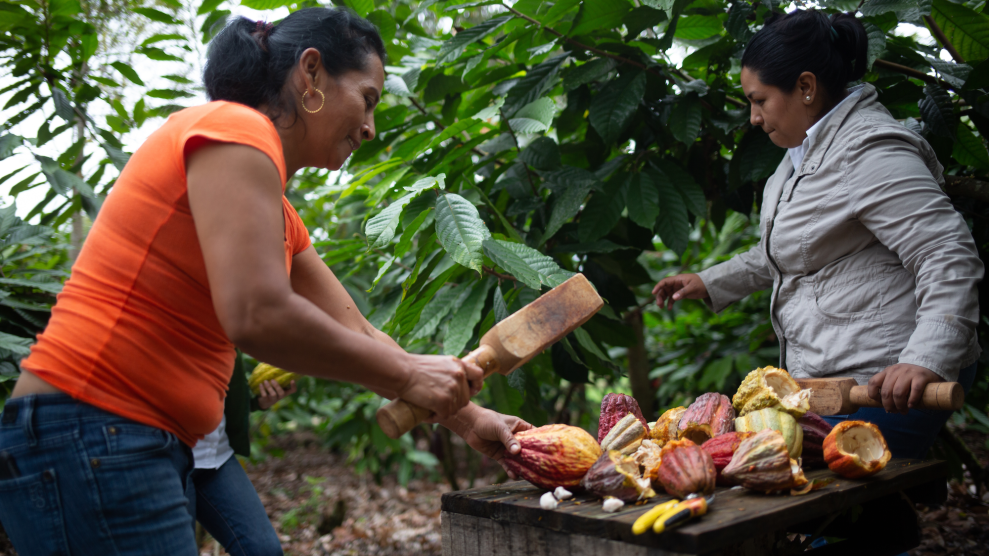 
This content was written by Fairtrade America; it was not written by and does not necessarily reflect the views of Mother Jones’ editorial staff. See our advertising guidelines to learn more.

Fairtrade organizations have launched a climate campaign targeted at world leaders attending the United Nations’ Climate Change Conference, known as COP26, in November in Scotland. In partnership with producers, businesses, and consumers, Fairtrade is pressuring leaders to confront trade injustice, enforce transparency in supply chains, and secure climate financing mechanisms for the 500 million family farms that produce 80 percent of the world’s food. These measures are critical and long overdue in addressing the climate crisis and ensuring a sustainable future.

How the Climate Crisis Is Affecting Farmers

The livelihoods of farmers and workers are at stake as the climate crisis escalates. Already this year in Africa, crops have been hit hard by extreme weather, including floods in Uganda, drought in Madagascar, locust invasions across the continent, and the hottest January and June ever recorded. In 2020, major hurricanes swept through Honduras, devastating Fairtrade-certified farming cooperatives with widespread flooding, landslides, roads cut off, and crops destroyed.

In the long term, escalating impacts could lead to loss of crops and the everyday products enjoyed globally. Up to half of the world’s land currently used to farm coffee might not be viable by 2050 due to extreme weather. These threatening conditions damage food crops and imperil the financial wellbeing of farmers, leading to poverty and desperation for land and water resources.

“Farming communities who have cared for their local ecosystems for generations know exactly why the climate crisis really is a crisis. Yet millions are unable to earn enough to adapt to the real threats climate change poses for lives and livelihoods,” said Kate Nkatha, Fairtrade Africa’s commercial director. “The fight against climate change is about human rights and ensuring justice for vulnerable communities.”

Farmers on the Frontlines

In the heart of Copán, Honduras—home of Mayan ruins—Fairtrade farmers growing coffee were suffering huge losses due to droughts and crop diseases brought on by climate change. The cooperative needed to diversify its crops to include cocoa, which is more resistant and has a more stable market price. So in 2020, they opened the Xol chocolate factory, the largest of its kind in the region, and, with the help of the Fairtrade Premium, farmers get extra money—on top of their Fairtrade sales—to invest in projects of their choice.

The cooperative has established nurseries to grow grafted and gourmet cocoa plants, funded in part by Fairtrade Premium. The farmers have planted more than 1.2 million cocoa trees and another 300,000 canopy trees to shade the cocoa, with the added benefit that canopy trees defend against soil erosion, soak up carbon dioxide, and provide food and habitat for wildlife and sometimes food and extra income for farmers.

Wealthy Countries Have a Global Duty to Support Farmers

The world’s wealthiest 10 percent are responsible for 50 percent of global emissions, and it’s those earning the least who are forced into extreme hardship by climate change. Generations of exploiting people and the planet have caused global inequality and a climate emergency. That’s why Fairtrade is urging world leaders of prosperous countries to uphold their promise to fund $100 billion in annual climate finance for nations on the frontlines of the crisis. Less than 2 percent of climate finance has reached small-scale farmers, so Fairtrade is calling on governments to make trade deals that encourage fair, low-carbon products and allow farmers to invest in sustainable farming. Regulations are needed to ensure that businesses profiting from global trade invest in reducing their carbon footprint and support those experiencing the harshest effects right now.

Fairtrade’s “Be Fair With Your Climate Promise” Campaign

Fairtrade’s organizations in Kenya, the UK, and the US are urging COP26 decision makers to listen to the expertise of farmers living the reality of the climate crisis every day. These farmers have years of experience stewarding their land in climate-vulnerable countries and already have the knowledge to create solutions to protect heavily relied-upon ecosystems. What they lack is the financial support to make those changes happen.

“Our planet’s farmers and agricultural workers are on the frontline of the global climate crisis. But far from being victims, they are integral in developing those key climate solutions that can reverse environmental degradation and pave the way towards a more sustainable tomorrow,” said Dr. Nyagoy Nyong’o, global CEO of Fairtrade International.

An international delegation of Fairtrade farmers and their representatives will meet with leaders at the Glasgow summit to make the case for immediate and decisive action on behalf of all Fairtrade producers worldwide. Now is the time for bolder and faster action on the climate crisis, and global leaders have a hugely important role to play.

Businesses Are Stepping Up

A growing number of Fairtrade-certified businesses are also showing support by signing a pledge committing to their own practices and urging governments to respond in full to the concerns expressed by producers. They’re using their power in the market to raise the volume of the 1.8 million farmers by standing behind them. Important contributors in this area, such as Tony’s Chocolonely, Ben & Jerry’s, Kaladi Coffee, Coliman, Navitas, and Equal Exchange, have pledged their commitments, setting a bar for other businesses.

How You Can Help

Unless the measures Fairtrade is fighting for are implemented, the international community’s climate ambitions will continue to fail the planet’s most vulnerable communities. Fairtrade is encouraging consumers to sign a petition in support of farmers’ rights with regard to climate justice in the lead-up to COP26. Visit fairtrade.org.uk/be-fair to learn more and sign the petition.