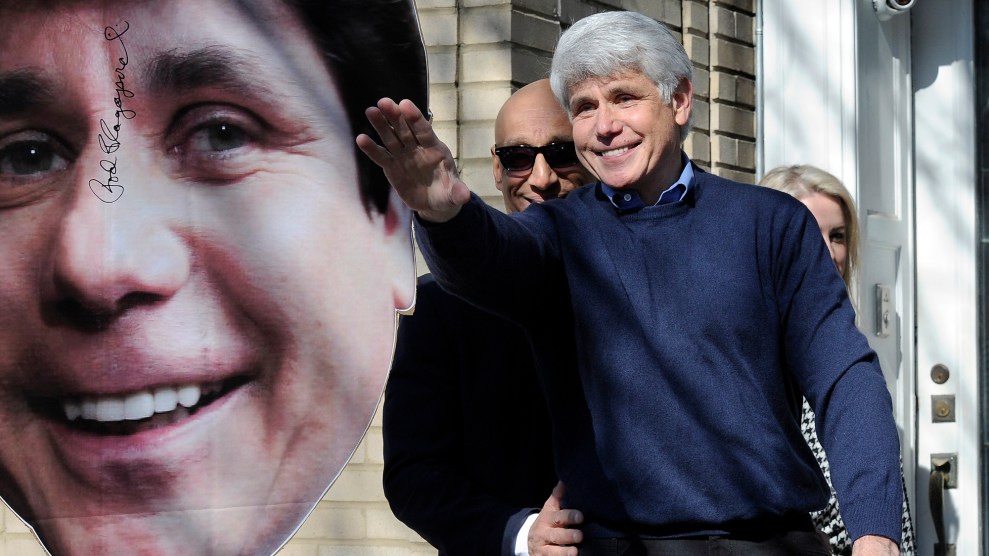 Former Illinois Gov. Rod Blagojevich waves to his friends after giving a press conference at his Chicago home.Mark Welsh/Daily Herald/AP

Ahead of the 2020 election, Trump is touting his reputation as a criminal justice reformer, and that apparently means equating Johnson—a Tennessee grandmother who was sentenced to life in prison for a nonviolent drug offense—with the politician who was convicted of to trying to sell Barack Obama’s Senate seat. At the urging of Kim Kardashian West, Trump commuted Johnson’s sentence in 2018, freeing her after 21 years behind bars. In an ad aired during the Super Bowl this year, the Trump campaign praised the president for freeing Johnson and for reuniting “thousands of families.”

Yes, Trump signed the bipartisan First Step Act, which was a major overhaul of the federal prison system, that same year. Thanks to the sentencing reforms in the act, more than 5,500 prisoners have had their sentences reduced or have been released early.

But no, the First Step Act—which Trump’s Justice Department has actually resisted implementing—isn’t the same as presidential clemency. And, as USA Today put it, “Most of the people Trump has given clemency to did not look like Johnson.”

To date, Trump has given clemency to 33 people (though one of them was actually pardoned by Obama, but a clerical error meant Trump had to re-issue the pardon). Johnson is one of just a handful of African Americans who have been granted clemency, despite the fact that African Americans make up nearly 40 percent of the federal prison population. Just six people have been granted clemency for drug crimes. Instead, many of Trump’s pardons and commutations have gone to white men, often those with connections to Trump and the GOP.

As for the First Step Act, Trump’s support for the program may mean precious little. As Mother Jones reported earlier this month:

But as Trump claims credit for freeing people from prison, there’s one very big problem that he’s not mentioning: His Justice Department is actively pushing to send some of these same people back behind bars, and to prevent others from reducing their sentences—which greatly limits who can benefit from the law that Trump has touted as one of his signature achievements.

While the First Step Act has allies in the White House—including Trump and his son-in-law Jared Kushner—the officials tasked with implementing it are in the Justice Department. Attorney General Bill Barr, who leads the department, has reportedly raised concerns in private that the legislation’s reforms will drive up crime. And under his watch, the department’s prosecutors have argued that hundreds of incarcerated people applying for relief under the law’s cocaine sentencing reforms are not eligible, according to an investigation by the Washington Post. In some cases, Trump has even stood onstage hugging and congratulating people who were recently released under the law—even as the Justice Department was arguing in court to lock those same people up again.