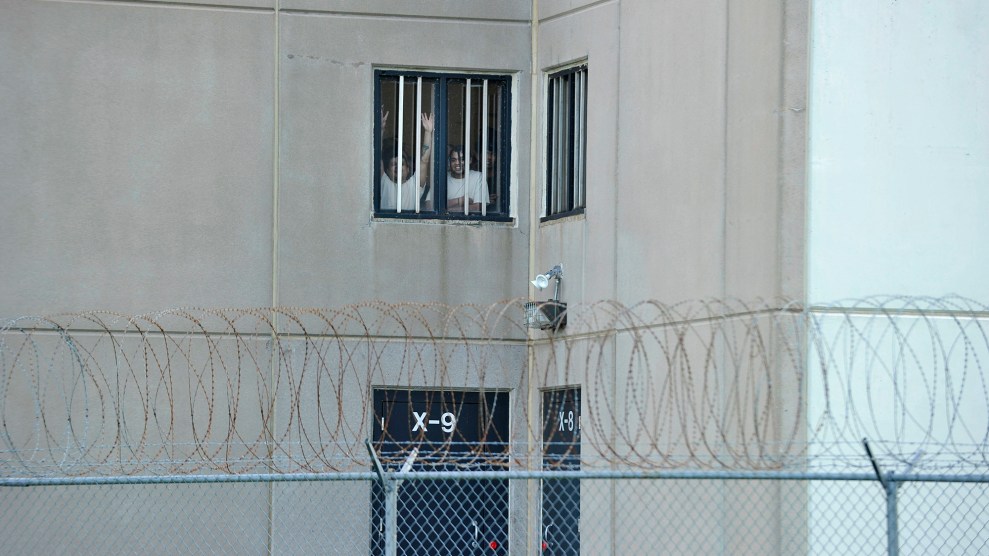 Detainees at the Strafford County Detention Center wave back to marchers rallying near the center where ICE detainees are being held, in Dover, New Hampshire.JOSEPH PREZIOSO/AFP via Getty Images

The American Civil Liberties Union and the Northwest Immigration Rights Project sued ICE Monday afternoon, calling on the agency to release some detainees at an immigration detention facility at the epicenter of the coronavirus pandemic in the United States.

The suit is focused specifically on immigrants who are considered high-risk for serious illness or death if infected with the new coronavirus. It lists nine people held at the Tacoma Northwest Detention Center who are older adults or have medical conditions that could make them vulnerable to COVID-19, the disease that develops from the novel coronavirus, including lung disease, heart disease, diabetes, epilepsy, kidney disease, autoimmune disorders, asthma, and hypertension, according to court filings. The facility is located just outside Seattle, an area that has been particularly hard hit by the coronavirus; the state department of health reports more than 700 confirmed cases and 42 deaths across Washington.

ACLU staff tell me that in addition to the nine people named in the lawsuit, it estimates that roughly between 50 and 100 people could also be at high risk in the detention center, but without having access to a complete roster of detainees or their medical records, the estimate is based on what people who are already working with attorneys have reported. The Tacoma Northwest Detention Center has a capacity of 1,575 and is privately owned and operated by the  GEO Group, which contracts with ICE.

At a time when social distancing and improved hygiene are the new norms, ICE detention centers, much like prisons, have hundreds of adults held in close quarters, often in facilities known for having notoriously bad medical services.

“Immigrant detention centers are institutions that uniquely heighten the danger of disease transmission,” Eunice Cho, senior staff attorney at ACLU’s National Prison Project, said in a press release. “In normal circumstances, ICE has proven time and again that it is unable to protect the health and safety of detained people. These are not normal circumstances, and the heightened risk of serious harm to people in detention from COVID-19 is clear.”

My colleague Noah Lanard wrote last week about the dangers to immigrants in ICE custody, saying the agency could “reduce the risk of the coronavirus spreading and potentially causing more deaths in its custody” by releasing vulnerable detainees, particularly those who don’t pose a threat to public safety. Noah spoke with one Cuban asylum seeker held in Louisiana:

The man, whom I’ll call Alberto to protect him from potential retaliation, had more reason to worry about the coronavirus than most: He was detained in a crowded room alongside nearly 100 others at a jail run by LaSalle Corrections, a company with a long record of providing shoddy medical care. “If coronavirus gets in here,” he said, “it’s going to be a massacre.”

As Noah reported, “ICE has broad authority to release people in its custody.”

The agency has posted online a page with its “guidance on COVID-19” where it claims to have no confirmed coronavirus cases in its detention facilities. According to this page, ICE is screening people when they arrive at detention facilities and is isolating detainees with fever and/or respiratory symptoms “who meet these criteria and observe them for a specified time period.” If needed, the agency says it will “consult with the local health department, as appropriate, to assess the need for testing.”

Monday’s lawsuit is the latest of many public calls for ICE to release vulnerable detainees held for immigration violations. Last week, a coalition of immigrant rights groups and human rights organizations sent a letter to ICE requesting that the agency “immediately grant humanitarian parole to all vulnerable persons” held at the Adelanto Detention Facility in California. The group of 14 organizations—which includes Al Otro Lado, Human Rights First, Immigrant Defenders Law Center, and Asian Americans Advancing Justice Los Angeles—has asked for a meeting with representatives from ICE and Adelanto no later than March 19. They haven’t gotten a response.