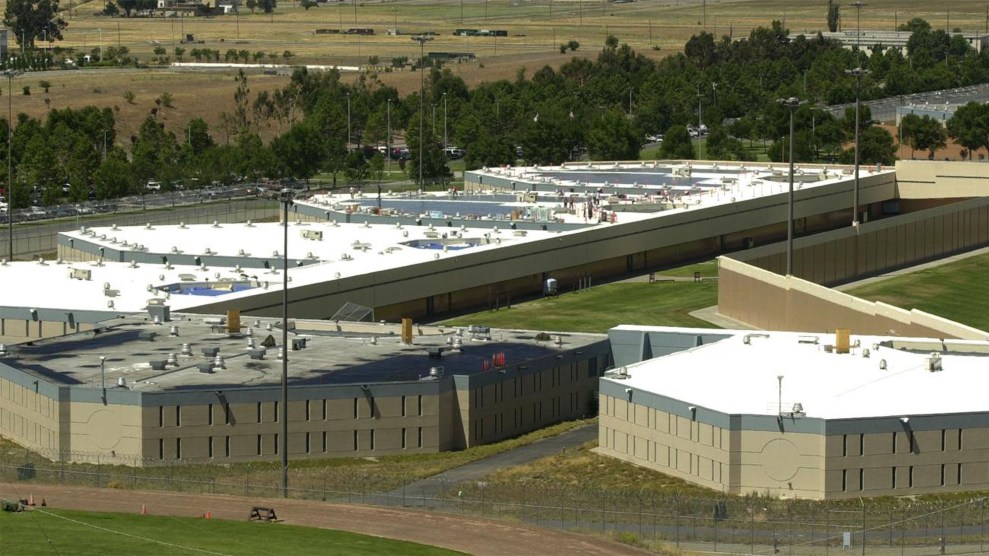 Amid mounting calls to release people locked up in jails and prisons to protect them from the coronavirus, one of the largest jails in California has reduced its population by about 500 inmates in the last two weeks. As of Monday morning, Santa Rita Jail in Dublin held about 2,150 people—nearly 20 percent fewer than usual.

The downsizing can be attributed in part to a recent agreement between Alameda County’s district attorney, public defender, and presiding judge to modify the sentences of nearly 250 inmates and release them. A local court also ordered that dozens more prisoners awaiting trial be released without bail. The population drop is also the result of changes on the front end, starting with cops booking fewer people. In mid-March, Sheriff Gregory Ahern instructed police officers to issue citations rather than arresting people for misdemeanors and only bring those accused of felonies to Santa Rita. Deputies booked about 50 people into the jail this weekend—about half the normal number, says Sgt. Ray Kelly, the sheriff’s spokesperson.

Meanwhile, the Alameda County district attorney’s office has drastically reduced the number of people it is charging with crimes. Over the last two weeks, it filed 70 percent fewer felony charges and 63 percent fewer misdemeanor charges, District Attorney Nancy O’Malley told a federal judge on Monday. “We are being very careful in our charging,” she said. “Doing everything we can to keep people from going into the system.”

Santa Rita has been the subject of complaints and allegations of human rights abuses, forced labor, and unsanitary conditions. Recently, as part of a class action lawsuit alleging mistreatment and neglect of inmates with psychiatric disabilities, federal Judge Nathanael Cousins ordered the sheriff’s lawyers to provide information about how Santa Rita was responding to COVID-19 crisis. “This ‘mega jail‘ is the third largest facility in California and the fifth largest in the nation,” Cousins wrote. “I am concerned by the potential impact of the global coronavirus pandemic on the health and safety of the [inmates]. A coronavirus outbreak in the jail additionally could have serious and long-term consequences to Jail staff and in the community at large.”

During a hearing on Monday morning, Gregory Thomas, the sheriff’s attorney, reported to Cousins that of 17 Santa Rita inmates tested for the coronavirus, seven have tested negative and 10 were still awaiting results. Several housing units in the facility are under quarantine, some due to possible exposure to a nurse employed by Wellpath, the jail’s medical contractor, who tested presumptive positive for COVID-19 last week. According to Thomas, both jail staff and people being booked into Santa Rita must undergo medical screening and wash their hands before entering the facility. Most visits have been cancelled and inmates are receiving about 25 minutes of free phone and video calls. Cleaning regimens have been stepped up and officers and medical personnel have been instructed to wear masks. Masks—with any metal pieces removed—have been distributed to any inmate who wants one, Thomas said.

Yet on Monday afternoon, a local anti-incarceration group posted a report from a current Santa Rita inmate who said many jail staff are not wearing masks or gloves, and that the jail has not provided cleaning supplies in more than a week. Defense lawyers attending the hearing reported that many of their clients, including those in units designated for asymptomatic inmates, had come down with coughs. Inmates told them that neither the phones nor the communal showers and bathrooms were frequently cleaned. “People within that facility have no choice but to use communal showers, communal bathrooms,” said Kara Janssen, a lawyer representing inmates in the class action suit. She called Santa Rita “an incredibly unsafe place because of continued booking.”

During the hearing, Alameda County Public Defender Brendon Woods called for more releases from Santa Rita. “We can maybe set some sort of benchmark,” Woods said, suggesting that up to 45 percent of the jail’s population could be released. The sheriff is not considering using his emergency powers to order a mass release, though he is aware of the option, according to Kelly. “When I think of that type of emergency, I think you’re talking about catastrophic failure of infrastructure,” Kelly says. “I’m thinking like, a giant 10.0 earthquake just comes in and just levels the entire region and the jail, and you just cannot do anything but let these people walk. We’re not at that point.”

Now that Alameda County is making some changes that criminal justice activists have been calling for for years, might it continue when life returns to normal? “After we get through this crisis, I think a lot of people will be asking those questions,” Kelly says. “They’ll be saying, ‘Well, you did it during the crisis. And we all, you know, survived. And there was less people in custody. Why can’t we do it now?’ As we come out of this thing, I think a lot of those questions will have more merit and validity.”