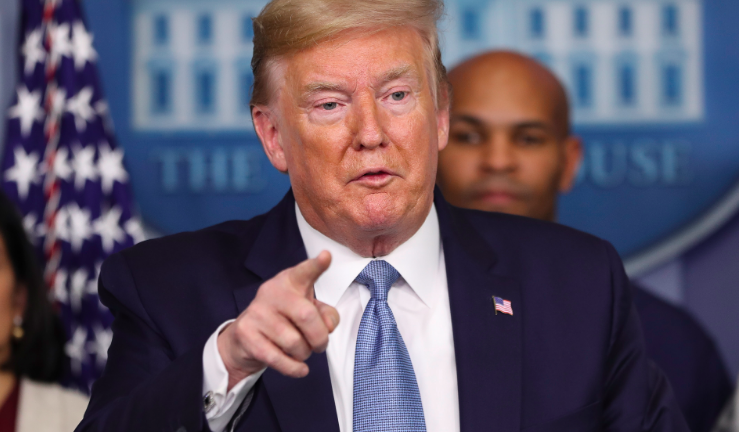 As the novel coronavirus pandemic continues to paralyze communities across the country—now with at least 4,800 cases confirmed in the US and 88 deaths—President Donald Trump in recent days has targeted Democratic governors in New York, Michigan, and Washington for supposedly mismanaging the public health crisis.

“Failing Michigan Governor must work harder and be much more proactive,” Trump tweeted shortly after Michigan Gov. Gretchen Whitmer appeared on an MSNBC segment Tuesday morning criticizing the president’s lack of action. “We are pushing her to get the job done. I stand with Michigan!”

The new line of attack follows similar attempts by the president to accuse the media and Democrats of capitalizing on the virus in order to undermine his reelection prospects in November. Meanwhile, states are scrambling to enact their own measures to slow down the spread of the virus after the Trump administration repeatedly failed to mount a significant response.

But as Trump publicly lashes out at Democratic governors, the New York Times reports that the president is privately advising states to go it alone. “Respirators, ventilators, all of the equipment—try getting it yourselves,” he told governors on a conference call on Monday. Though he insisted that his administration would back state efforts to obtain emergency medical supplies, Trump failed to clarify exactly what that support would mean.

As governors grow increasingly frustrated by the federal response and the number of reported cases are growing throughout the country, Trump has also resurrected his longstanding feud with Andrew Cuomo, claiming that the New York governor must “do more” to fight the pandemic. It was a particularly random attack to make given Cuomo’s decisive action on a string of stringent measures to combat the pandemic, including shutting down schools and public spaces across the state, while Trump had, until yesterday, repeatedly minimized the seriousness of the threat.

Trump foreshadowed his need to politicize even a global pandemic by focusing his anger at Democratic governors nearly two weeks ago, when he called Washington Gov. Jay Inslee a “snake” for criticizing his slow response to the virus. “I told Mike [Pence] not to be complementary to the governor because that governor is a snake, okay, Inslee,” Trump told reporters at a press conference on March 7. “I said if you’re nice to him, he will take advantage…we have a lot of problems with the governor.”