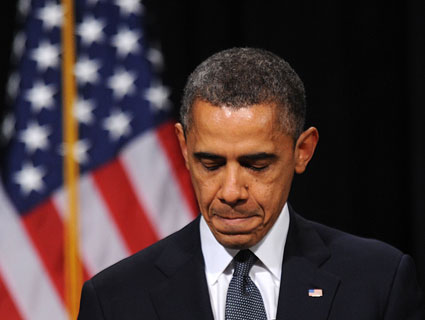 At the memorial ceremony in Newtown on Sunday night, President Barack Obama declared that he would respond to the tragic shooting there with real policy action. This raised the expectation that he would take on the dicey matter of gun control. And at the White House this afternoon, he further fueled these expectations. The president announced the creation of an effort headed by Vice President Joe Biden. But, he noted, this would not be the typical “Washington commission” that takes months to produce a report that is pushed aside. Instead, Obama insisted, this Biden-led initiative would craft “real reforms right now” and cook up “concrete proposals” by the end of next month. Moreover, the president said, he would then push Congress to vote on these ideas soon. “I will be talking about these in my State of the Union,” he said.

Obama suggested several steps he wants to see: some sort of ban on assault weapons, enhanced background checks for gun buyers, and an end to the gun-show loophole (which allows the purchases of firearms without such checks).

Obama, who has done little about gun violence since taking office, has committed himself to an issue he has heretofore avoided as president. While campaigning for the presidency in 2008, Obama backed permanently reinstating the assault weapon ban that had expired in 2004. And after he assumed office, his administration announced it would proceed on this front. But then Obama went silent. Nothing was done. The president was not willing to confront this hot and politically difficult topic.

Yet in the aftermath of the Newtown nightmare, Obama is not equivocating. “Words need to lead to action,” he said today. He recited a list of Americans who have been killed by guns in the days since the Newtown shooting, noting that this group included several police officers and a four-year-old. He pointed out that gun violence claims the lives of 10,000 Americans every year and asserted this cannot be accepted as “routine.”

“I will use all the powers of this office to aim to prevent more tragedies like this,” Obama said. But, he added, ultimately, it “will take a wave of Americans” saying “enough.”

With such remarks, Obama is making it clear: He has adopted combating gun violence as a priority. And he has now placed himself in the position where he will be judged on whether he gets anything done.