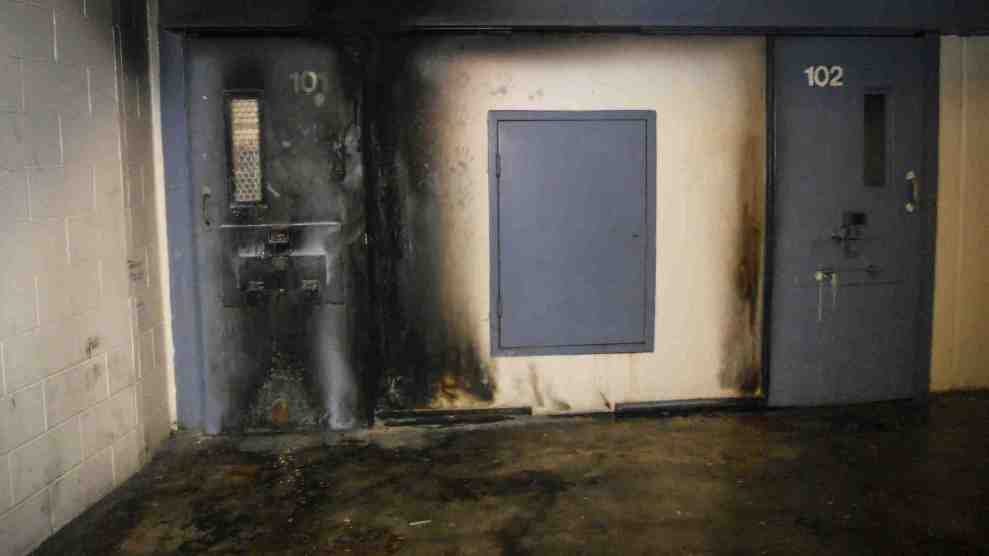 Smoke damage is visible on cells inside the East Mississippi Correctional Facility.ACLU

Last August, when Terry Beasley and other inmates noticed a man had died in his cell, they pounded on the window of their dayroom for at least 30 minutes. “Still wouldn’t nobody come on the zone,” Beasley recalled. Finally, an officer opened the door to their housing area, allowing an inmate to slip past and run to get help from the guard captain. Knowing how long it took to get help in an emergency “made me feel kind of scared,” Beasley said, “because I’m a diabetic, and you don’t know when my sugar might drop.”

Beasley described life inside the East Mississippi Correctional Facility during the first week of a federal trial over conditions at the for-profit state prison located 90 miles east of Jackson. EMCF is the state’s designated facility for inmates with psychiatric needs, and around 80 percent of the prison’s roughly 1,200 inmates have been diagnosed with a mental illness. Five years ago, prisoners there sued the Mississippi Department of Corrections, claiming that its top officials had failed to keep tabs on the prison’s corporate operators and allowed dangerous conditions to go unaddressed. The prisoners’ class-action lawsuit describes a crumbling facility with broken locks on cell doors, frequent assaults by inmates, and a critical shortage of guards and medical staff.

“It’s more than inattention, it’s outrageous neglect and callousness. They get almost no services.”

“What I’ve seen at East Mississippi Correction Facility, I have not seen for decades,” said Elizabeth Alexander, one of 13 attorneys representing the inmates. “This is a trip back to the old days of prison conditions.” The case went to trial in March after multiple failed attempts to settle outside of court, according to American Civil Liberties Union lawyer Carl Takei. It’s being heard by US District Judge William H. Barbour, Jr., who will decide whether the state has been “deliberately indifferent” to conditions at EMCF that posed serious risk of harm to inmates.

In their complaint, filed in 2013, prisoners claimed the state prison commissioner and other officials had failed to hold the companies that run EMCF accountable for “grossly inhumane conditions” that “cost many prisoners their health, and their limbs, their eyesight, and even their lives.” The inmates’ original complaint told the stories of multiple prisoners who lit fires to obtain emergency medical attention. According to EMCF records, 1,217 inmates and 47 staff members were injured by fires in 2016. In addition to Beasley’s testimony, deputy warden Norris Hogans testified that as of February, inmates were still lighting fires outside their cell doors three times a week.

Hogans also testified about fights that broke out on March 6, 2017, when the facility was supposed to be on lockdown. All prisoners were supposed to be in their cells, yet security footage shows more than a dozen inmates in two separate housing areas milling around in common areas. In one pod, prisoners began fighting with broom and mop handles; in the other, they kicked and beat a man and left him lying on an elevated walkway. Guards did not enter either housing area for around 30 minutes. Hogans said the prison did not investigate how so many inmates were loose during the lockdown. According to the New York Times, when the prison’s warden was asked if guards were able keep inmates in their cells, he replied, “They do their best.”

The inmates filed their case the year before a corruption scandal swept through the highest levels of the Mississippi Department of Corrections. In 2015, former state prison Commissioner Chris Epps pleaded guilty to a federal bribery charge after distributing more than $800 million in contracts to prison companies while receiving at least $1.4 million in bribes and kickbacks, mostly funneled through a former state legislator to whom companies had paid thousands of dollars in “consulting fees.” Those companies included Management and Training Corporation, a Utah-based firm that received a contract from Epps in 2012 to operate EMCF, and Health Assurance, a vendor that provided medical and mental health care at the facility between 2012 and 2015.

Epps and his accomplice went to prison, as did the part-owner of Health Assurance. MTC has denied any wrongdoing and maintained that it had no knowledge that its “consulting fees” would be used to illegally line Epps’ pockets; it’s currently fighting a lawsuit from the state attorney general over its role in the scandal. EMCF’s medical services are now provided by a correctional health care company called Centurion.

“This is a trip back to the old days of prison conditions.”

The inmates lawyers say little has improved at the facility since Epps stepped down. Takei argues that many of the issues at East Mississippi Correction Facility stem from chronic understaffing and the state’s failure to require MTC and Centurion to hire more guards and medical professionals. “Staff was beyond short,” one guard wrote in a log book last year that was entered into the trial record. “No staff to conduct or do security check.” EMCF currently has no full-time psychiatrist, despite having a mental health caseload of about 1,000 men. The Mississippi Department of Corrections, which pays MTC $26 per day for each minimum-security inmate, denies that the prison is understaffed.

Understaffing is a common complaint at private prisons. Yet the situation at EMCF is exacerbated by its prisoners’ mental health care needs. Some of the most alarming testimony in the trial has come from one of the plaintiffs’ expert witnesses, Terry Kupers, a professor at the Wright Institute in Berkeley, California, and a nationally recognized specialist on solitary confinement. After investigating the prison’s segregation unit, Kupers testified that its conditions were the worst he had ever seen. Jammed locks on cell doors left inmates free to roam and attack others, and broken lights went unfixed, leaving inmates in darkness for days. He found little record of mental health care examinations or therapy.

“It’s more than inattention, it’s just outrageous neglect and callousness,” Kupers said in court. “They can’t get light bulbs. They cannot get cleaning material. The damage from the fires is not removed. The trash is not picked up. They get almost no services. They can’t even get the attention of the officers.”

Beasley worked as a porter in the prison’s solitary confinement unit in 2016, cleaning the unit and sometimes the cells. He testified that nearly every day, he saw prisoners who had cut themselves stick their arms out of the food tray slots in their cell doors, “blood just dropping everywhere.”

Kupers’ investigation confirmed Beasley’s stories. “I’ve never seen this degree of self-harm in a correctional setting,” Kupers testified. He explained that many prisoners in solitary became stuck in a cycle: They would attempt to escape isolation by cutting themselves so they would be taken to the medical unit. There, they would get some relief, but before long they would be back in isolation for a longer stay because self-harm is a rule violation punishable by solitary confinement. “The people with serious mental illness, I can say with a reasonable degree of medical certainty their condition is going to worsen under these conditions,” Kupers said in court. “They are going to have worse disability, and they’re going to have a much worse prognosis. And, God forbid, they will [attempt] suicide to a larger than excusable proportion.”

While the inmates’ complaint details frequent suicide attempts, just one inmate has died as the result of suicide since 2012—a fact emphasized by the state’s lawyers. (There have been many other non-suicide deaths at the prison, including four so far in 2018.) Throughout the case, the state has argued that conditions at the prison are mostly acceptable and that the prison has made good-faith attempts to fix its problems. “This is a prison; it’s not a daycare center,” W. Thomas Siler Jr., a lawyer representing the state, said in his opening argument. “Every prison everywhere, every expert is going to say it’s got its share of problems.”

The state’s legal team has also laid responsibility at the feet of inmates, who it says “sabotage” the prison by jamming locks, setting fires, and smuggling in contraband. “It’s just that kind of thing, a constant effort of trying to stay ahead of the prisoners, and stay ahead of what they’re doing to defeat whatever we’re doing to help keep them safe,” Siler said.

As evidence of the dire conditions at East Mississippi Correction Facility has accumulated during the monthlong trial, Judge Barbour has often appeared impatient with the inmates and their legal team. He has urged prisoners not to “lollygag around” before they are transported to court each morning and has admonished their lawyers for going into too much detail about the poor conditions. “Suppose I tore up your pad of questions. Could you question this witness? No,” the judge interrupted Eric Balaban, another ACLU lawyer, after listening to Balaban question an expert witness for several hours on March 22. “You’ve made your point. The mental health in this prison is not good.”

The trial is expected to conclude this week, and Judge Barbour’s decision will follow in the coming weeks. If he rules in the prisoners’ favor, he could force the Mississippi Department of Corrections to develop a plan for addressing EMCF’s problems. If he sides with the state, it will be up to prison officials to take action—leaving prisoners like Terry Beasley waiting for relief.