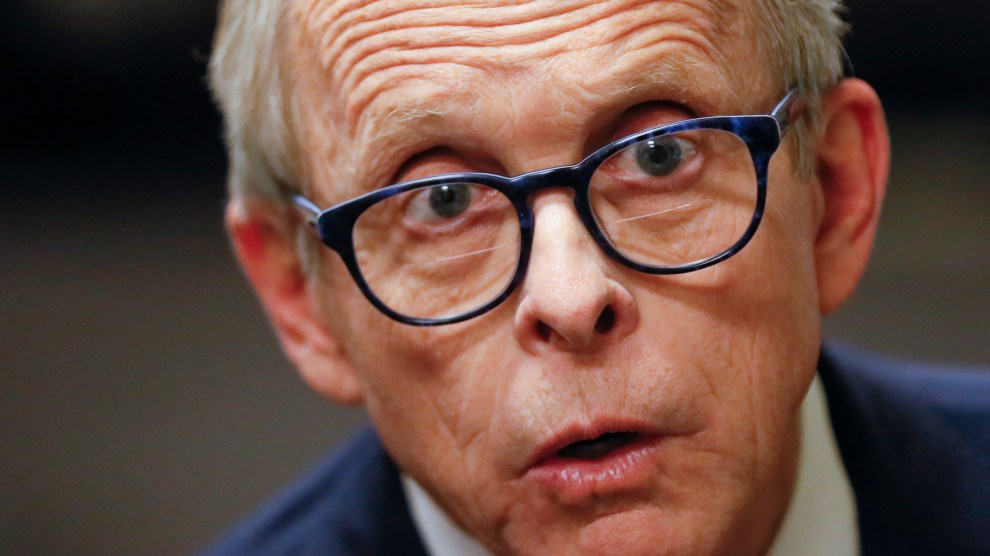 Standing at the podium during an Ohio gubernatorial debate last month, Attorney General Mike DeWine raised one hand and looked straight into the TV camera. “I am pro-life,” he said. “I believe government exists to protect the most vulnerable people. That includes the unborn as well as the born.”

This directness came as no surprise to the state’s reproductive-rights activists. DeWine has been instrumental in curtailing the ease and availability of abortions in Ohio. He has worked hand-in-hand with Gov. John Kasich to slash the number of clinics in half and to roll back access to contraception.

According to recent polls, DeWine, who shares the Republican ticket with Secretary of State Jon Husted, another vocal foe of women’s reproductive rights, is neck-and-neck with Democratic rival Richard Cordray. The outcome of the race could have big ramifications for women seeking abortions, with a DeWine victory significantly upping the ante in the state’s abortion wars.

For years, Ohio politicians have slowly whittled away at a woman’s legal right to end her pregnancy.

For years, Ohio politicians have slowly whittled away at a woman’s legal right to end her pregnancy. In 1995, Ohio was the first state to ban so-called partial-birth abortion, an imprecise term for a rare procedure used late in pregnancy. A federal court struck down the law, which nevertheless set off a wave of copycat legislation nationwide. In 2003, President George W. Bush signed the federal Partial Birth Abortion Ban Act, outlawing the procedure—DeWine, then a United States senator, was a solid aye vote.

Kasich has signed 20 anti-abortion measures since 2011, according to NARAL Pro-Choice Ohio. These include a ban on abortion after 20 weeks and a law that makes it a criminal offense for women to abort a fetus that may have Down syndrome. Women have to have two in-person doctor’s appointments prior to receiving an abortion, and must undergo a state-mandated ultrasound. State-funded rape crisis counselors are not allowed to refer women to abortion services.  Kasich has also imposed burdensome requirements on abortion clinics, which now have to have a patient-transfer agreement with a local private hospital. The various restrictions have contributed to the closure of eight of the state’s 16 facilities over seven years.

Would DeWine be more hostile toward reproductive rights than Kasich has been? “It’s not possible, it’s 100 percent fact!” says Kellie Copeland, executive director of NARAL Pro-Choice Ohio. DeWine has made restricting abortion a top priority, both as a senator and as AG, bolstering Kasich’s anti-abortion efforts, opposing contraceptive coverage under the Affordable Care Act, and blocking Planned Parenthood from using Medicaid funds for preventative healthcare. DeWine also has close ties to the anti-abortion group Ohio Right to Life. Last year, he filed a legal brief in court in an attempt to block an unaccompanied minor from obtaining an abortion in Texas.

Should DeWine win, it’s possible the governor’s office will be the last stop in his political career. (He’s 71.) If that’s the case, he wouldn’t suffer future political consequences for his actions as governor. “That, combined with his ideology and his record, make him the most dangerous prospect that we’ve faced in a while,” Copeland told me.

A “heartbeat” bill, which DeWine has indicated he would sign, would amount to a de facto ban on abortion.

Abortion-rights advocates fear DeWine might accomplish something Kasich has failed to achieve: sign a “heartbeat” bill banning abortion as early as six weeks into a pregnancy. That would amount to a de facto ban on abortion, given many women don’t know they are pregnant before six weeks. Kasich vetoed such a bill in 2016, but DeWine has categorically stated that he would sign one if he had the chance. Other Ohio bills in the works would forbid doctors from performing a surgical procedure used in second trimester abortions, and the would require the burial or cremation of aborted fetuses.

If legislation such as a heartbeat bill were to get tied up in court, DeWine’s cause will likely benefit from the recent confirmation of two anti-abortion judges to the Sixth Circuit Court of Appeals, which covers Ohio. As for the Supreme Court, with Brett Kavanaugh tilting the bench rightward, all bets are off.

Yet to the extent Ohio has been an incubator for anti-abortion legislation, it’s also possible that it could function as a testing ground for abortion-rights groups looking to fight back. Grassroots advocacy in Toledo helped save the city’s last remaining abortion clinic, despite DeWine’s efforts to force it out of business with patient-transfer-agreement laws. Activists pressed the only eligible private local hospital to cut a deal with the clinic—something many hospitals are unwilling to do. Copeland calls it the first successful abortion-related “corporate accountability campaign” in the nation. “DeWine will do his worst,” she says, “but pro-choice Ohioans will stand up and take action. They won’t just let this happen.”