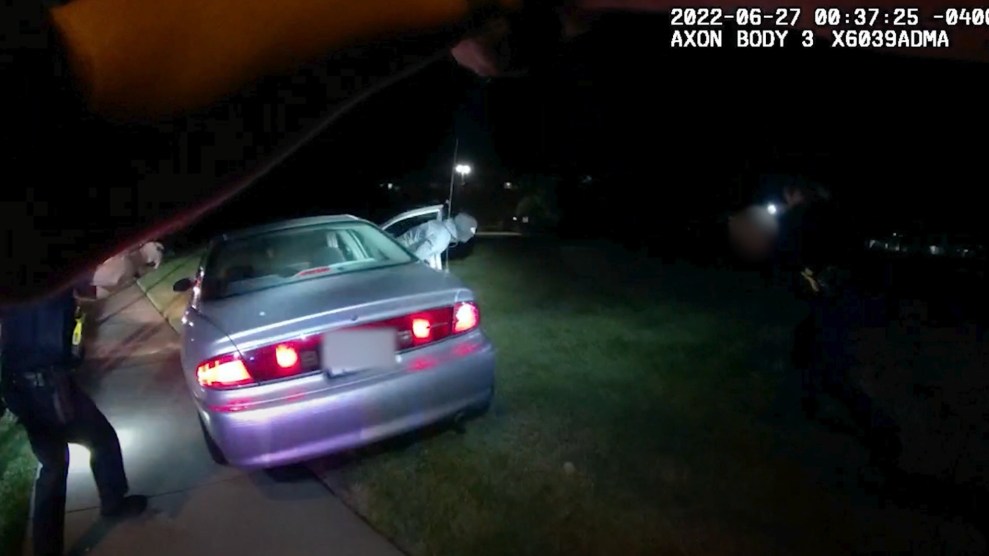 Police killed Walker, 25, after he fled his vehicle on foot following a car chase, the department said in a press release: He had refused to pull over for a suspected traffic violation, and officers pursued him after they heard a shot fired from the car—leading them to believe that Walker, who wore a ski mask, “posed a deadly threat to them.”

But at a press conference Sunday, Akron Police Chief Steve Mylett confirmed that the fleeing suspect was, in fact, unarmed—police say they found a handgun and loaded magazine, alongside a gold ring, on Walker’s driver’s seat. The video compilation released by the department includes 13 video segments from body-worn cameras. The footage shows several officers yelling and chasing Walker on foot; they continue to fire repeatedly after Walker is on the ground.

“When an officer makes the most critical decision in his or her life as a police officer, it doesn’t matter where in the country this happens, when they make that most critical decision to point their firearm at another human being and pull the trigger, they’ve got to be ready to explain why they did what they did,” Mylett said. “They need to be able to articulate what specific threats they were facing, and that goes for every round that goes down the barrel of their gun.”

The eight police officers involved in the killing were placed on paid administrative leave as protesters took to the streets to demand answers and accountability. A medical examiner’s report indicated that the body had at least 60 wounds, according to Bobby DiCello, a lawyer for Walker’s family. “I’ve been a trial lawyer for 22 years and I’ve never seen anything remotely close to what that video is going to show,” he told the New York Times ahead of its release.

Jayland was unarmed and running away when police opened fire, firing 90 shots, hitting him 60.

The Department of Justice needs to step in to investigate immediately. pic.twitter.com/owMmoSwFCi

As many as 1,042 people were fatally shot by police in the past year alone, with Black people killed at more than twice the rate as their white counterparts, according to the Washington Post’s police shootings database. In 2017, Mother Jones reported on the 2015 South Carolina shooting of Walter Scott, another unarmed Black man gunned down by police as he fled a traffic stop. Scott’s killer, North Charleston officer Michael Slager was ultimately sentenced to 20 years in prison, an unusually stiff penalty for a cop accused of homicide.

As freelance writer Michael Sokolove noted in his piece:

“There are about 18,000 law enforcement agencies in the United States, and they have no standard set of procedures for handling noncompliant suspects. To give but one example, the New York City Police Department barred its officers from shooting at moving vehicles back in 1972, except in cases where the driver or passengers posed a deadly threat. The result was an immediate and sharp decrease in officer-involved shootings—a 33 percent drop the very next year. Yet more than four decades later, many departments still have no formal policy against firing at vehicles, despite the obvious dangers. (In November 2015, police in Marksville, Louisiana, fired on the car of a fleeing suspect, killing his six-year-old son.)

Decisions about when to pursue a suspect on foot are almost always left to the officer’s discretion, and many cops have a hard time resisting. When a suspect runs, “the tendency is to chase,” said [Chuck Wexler, head of the Police Executive Research Forum]. “There’s a sense that this person must be wanted for something more serious. Why is he running from me?”

Sokolove also cited passages from a Department of Justice report on improper use of force by police in Chicago, whose authors wrote:

“We found that officers engage in tactically unsound and unnecessary foot pursuits, and that these foot pursuits too often end with officers unreasonably shooting someone—including unarmed individuals…The chases are “inherently dangerous and present substantial risks to officers and the public. Officers may experience fatigue or an adrenaline rush that compromises their ability to control a suspect they capture, to fire their weapons accurately, and even to make sound judgments.”