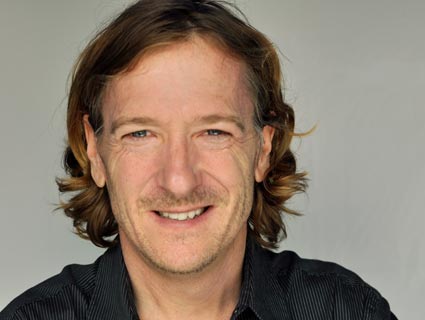 Chris Paine, director of Revenge of the Electric CarImages courtesy of the filmmakers

Back in 2006, the documentary Who Killed the Electric Car? revealed how various industry players—including petroleum companies and car manufacturers themselves—conspired to sabotage the launch of the first electric vehicles. But shortly after the film was released, its director, Chris Paine, began to hear rumblings of an electric car comeback. “I started an email correspondence with GM,” recalls Paine. “I said, ‘we thought you had a great car and we were upset that you killed it. But if you’re going to do it right, I’m going to tell the story, since it’s not often that companies change their minds on big decisions like that.'” Sure enough, a few years later the next wave of electric cars have hit the market—and Paine’s sequel, Revenge of the Electric Car, tells the story of what happened. I spoke to Paine shortly after his film’s Earth Day premiere.

Mother Jones: What’s changed since Who Killed the Electric Car?

Chris Paine: There was a lot of blowback after the first programs were killed. Consumers were saying, ‘If we have to have cars, why are only bad cars available? Why do we have to rely on the Middle East?’ So the right and the left came around—afor security reasons and environmental reasons—and then the car industry itself, which realized no one was buying cars when gas hit $4 a gallon in 2008. And here we are in 2011, with gas prices going nowhere but up, and there is a serious international consensus that you have to have higher miles-per-gallon cars.

CP: I’m sure the gasoline companies would still love to keep their 100 percent monopoly on transportation fuel. But what’s changed since then is the fact that almost all the refineries in the US are at 100 percent production right now. They can’t even keep up with demands for gasoline. So the last thing they want is to be caught driving up prices while at the same time they are publicly coming down, like they did last time on electric cars. So I think they’re staying out of the way this time. I don’t know what’s happening behind the scenes, but they’re not running ads against electric cars or claiming they’re unsafe like they did last time.

MJ: Can electric cars save Detroit?

CP: I think electric cars can help save Detroit. They reflect good decision-making, and there has been bad decision making in the auto industry for so long, in my view. In the course of filming Revenge of the Electric Car I became a little more sympathetic to the car industry in terms the way it impacts the global economy. Not just in Detroit in the obvious ways, but the workers in this industry all around the world. Also, lots of things that progressives like, like the show The West Wing, were largely supported by car advertising. This stuff went away when Detroit started to go under.

CP: I like to take folks back to the turn of the century when people said ‘gas cars can never replace horses because you can feed horses at your house, you get along with them, they’re nice.’ Well the same thing is true today. Obviously the horse can still do things that the gas car can never do, and the gas car will always be able to do things the electric car can’t do. But they have really different uses and advantages.

MJ: Sure electric cars are greener than gas cars in states that use lots of renewable energy. But what about in coal states?

CP: There are studies that show that EVs still result in overall savings on energy and emissions, even in coal states. Plus, what oil companies don’t want you to know is that refineries use a huge amount of electricity in refining gasoline. And that’s usually not even figured into reports about gas cars’ overall energy use.

MJ: How much of the electric cars push is just car companies greenwashing?

CP: In the case of all the carmakers, there’s a certain amount of greenwash. Take Toyota: They were pushing the Prius while they were meanwhile marketing the hell out of the Sequoia and other models with terrible gas mileage. And they were using the Prius to trade off on their emissions standards. All these guys use the environmental car to greenwash the rest of the label. But the reality is that this is actually where we should be going. And if these cars gain traction, they’ll start making money on them. And instead of making their margins on the SUVs, they’ll start making those margins on electric cars, and that will become their bread and butter.

MJ: Do you think China will beat the US in the race to develop the best electric car technology?

CP: I think China is set up to surpass the US on the even more critical industry of green power. Thomas Friedman says it’s not red China anymore, it’s green China. And not because they care about the environment necessarily, but because they want to dominate this industry where they see everything going to once they hit peak oil. They hope we waste a lot of time arguing about whether global warming is man-made or not, because every day we waste time they get another day ahead with windmills and solar panels and electric cars and charging infrastructure. Our electric cars are still better. They’re much better than China’s BYD. I think the US has an arguable advantage right now in this area and I hope we can keep it.

MJ: Of the electric cars currently on the market, which do you think is the best?

CP: Really they’re all for different purposes. I bought one of each of these cars at full market price. My girlfriend primarily drives the Leaf. It’s a high-riding car—makes you feel like you’re almost in a mini SUV. It’s much roomier than I expected. I traded my Prius in to get a Volt. I was most skeptical of the Volt, and I’ve probably also been the most impressed by it. When the doors shut you feel like you’re in a submarine. It’s very well insulated.

MJ: What are the biggest challenges for electric cars?

CP: We’re still in the midst of a recession. There are not a ton of people buying cars—cars are expensive. So people usually go for the cheapest car they can get. And if the price of gasoline falls again, it makes the savings that you get with an electric car harder to realize. Low gas prices could really delay this. The other thing that could delay it is people not wanting to take a chance on changing what they think of as a car. Resistance to change is always the biggest obstacle.

CP: We just launched it—it’s called CounterSpill. We’re taking on the biggest non-renewable energy disasters in the world and keeping them on the front page rather than buried in the news cycle or the corporate spin cycle. Oil companies earned a permanent enemy in me when they messed with the electric car the first time around, and I think they continue to do a disservice in making it seem like fossil fuels are cheaper than they really are in terms of total cost. We want to point out that solar, for example—which has typically been thought of as so expensive—is cheap when compared with, for example, the cost of cleaning up the Fukushima nuclear disaster and the Gulf.