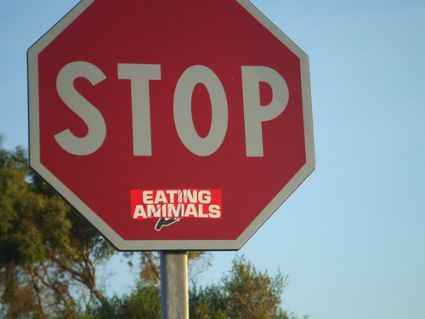 In 2006, Congress quietly passed the Animal Enterprise Terrorism Act, a sweeping new law that classified many forms of animal rights campaigning as terrorism. Now the law’s critics have taken to the courts to try to kill it. In a case filed last week, five activists argue that AETA violates their rights by criminalizing constitutionally protected actions.

AETA, which replaced an earlier, weaker law called the Animal Enterprise Protection Act (AEPA), prohibits anything done “for the purpose of damaging or interfering with the operations of an animal enterprise” or that “causes the loss of any real or personal property.” (The earlier version of the law only covered “physical disruption” to operations.) The law also prohibits “economic damage” to an enterprise, which includes loss of profits and pressure put on any investors or other companies that do business with the animal enterprise. Even the definition of “animal enterprise” is so broad that it could be construed as covering any institution that has a cafeteria selling meat or cheese products, argues Rachel Meeropol, an attorney with the Center for Constitutional Rights, which is backing the plaintiffs in the case filed against Attorney General Eric Holder.

“Basically, the law is saying if you cause an animal enterprise to lose profits, then you’ve committed a terrorist act,” Meeropol says. “The whole point of many protests is to cause a business to lose profits, to convince the public that a certain company doesn’t deserve to be patronized.”

Faced with the possibility of terrorism charges for engaging in many forms of protest, a number of activists have decided to curb their activity.

Sarahjane Blum, the cofounder of the anti-foie-gras group Gourmet Cruelty, is the lead plaintiff in the suit. She has spent years documenting ducks and geese that are too fat to walk or breathe in videos and photographs, posting them online. In 2004, she was charged with burglary for removing birds from a New York farm, though the charge was later downgraded and she was sentenced to community service. Blum, 33, now worries that otherwise legal activities—like picketing a restaurant that serves foie gras or running education campaigns—could lead to her being deemed a terrorist under the AETA. The law’s broad reach means Blum’s no longer comfortable participating in or encouraging much of the work that helped prompt California lawmakers to outlaw foie gras in the state starting in 2012.

“It’s impossible for me at this point to speak freely,” she says. “I feel, and I am, censored. I am censoring myself.”

One federal judge has already endorsed the idea that the government’s use of AETA has been too broad. In 2009, four protesters in California were charged under the law for allegedly chalking a sidewalk, handing out fliers, and engaging in protests at the homes of researchers that use animals. Ronald M. Whyte, a federal judge in California, threw out the charges, finding that they were too vague and included constitutionally protected actions.

The US Department of Justice has used the older version of the law successfully in some cases. In 2004, a group of animal rights advocates were convicted and imprisoned under AEPA. One of the convicted activists, Lauren Gazzola, is a plaintiff in the suit against the updated law. Gazzola, 32, was a US coordinator of an international campaign against animal product testing known as Stop Huntingdon Animal Cruelty. The campaign started in the United Kingdom and targeted the animal testing lab Huntingdon Life Sciences, which tests a variety of pharmaceuticals, chemicals, and other products on animals. The SHAC campaign gained traction in the late 1990s after undercover video was released showing Huntingdon employees in the UK punching beagle puppies in the face. It eventually expanded to the US to target a Huntingdon facility in New Jersey.

Gazzola worked with other US-based activists to organize demonstrations, write press releases, and run SHAC’s websites, which advocated for and published reports on a variety of protest activity targeting Huntingdon, its employees, and companies that had done business with it. That included publishing the names, addresses, and phone numbers of Huntingdon employees and other people who had done business with the company. The actions SHAC posted on ranged from legal nonviolent protests to property destruction. In its indictment, the government argued that the SHAC website encouraged people to commit violent acts and gave them the information they needed to do so.

In March 2006, Gazzola was found guilty of six felony charges, including stalking and conspiracy to violate AEPA. Gazzola was never personally involved in any illegal protest, she says—just in writing and speaking about protest actions, and posting accounts from people who did engage in those acts. Nor were the other five SHAC activists charged with actually committing violent acts. But government prosecutors made it clear that they believed they were shutting down the activities of a group that promoted terrorist acts. (Mother Jones covered the case in 2006.)

Gazzola served over three years in a federal women’s correctional institution in Danbury, Connecticut, and another five months under supervision at halfway house. She’s now in the middle of three years of federal probation, and for next 20 years, part of her salary will be garnished to pay restitution to the companies her actions affected. She works a communications associate at the Center for Constitutional Rights and is finishing up a graduate degree from Antioch University that she began while in prison.

Although the government locked up Gazzola and other SHAC activists under the the older statute, in 2006 Congress decided to strengthen the law and rebrand it as the “Animal Enterprise Terrorism Act.” The new version passed in the Senate in September 2006, where it was touted by cosponsors Sens. James Inhofe (R-Okla.) and Dianne Feinstein (D-Calif.) as necessary to “enhance the effectiveness of the U.S. Department of Justice’s ability to prosecute animal rights extremists.” It passed the House without a roll-call vote several weeks later, and President George W. Bush signed it into law on Nov. 27, 2006.

AETA was passed specifically to cover a broader range of groups and activities than its predecessor, says Will Potter, a reporter who has covered the attempts to classify various forms of activism as terrorism in his blog and book Green Is the New Red. “They’re really trying to scare the hell out of people,” he says.

Gazzola and the other activists involved in the case say they want to resume their work on animal rights campaigns—but not if that means being labeled terrorists. “It’s a real problem when you’re not sure if your protest activity is protected or terrorism,” Gazzola says. “Under AETA, protest and terrorism are conflated. They’re one and the same.”