In certain moments, Traci Des Jardins embodies the stereotype of an elite French chef: the way she glides coolly into the room, her impenetrable gaze fixed on you in a manner that makes you question why you have the right to be interviewing her in the first place. She is, after all, a two-time James Beard Award-winning culinarian, head of five Northern California restaurants, and one of the country’s top female chefs who recently bought out her partner to become sole owner of the very classy San Francisco establishment, Jardinière, where the menu offers morsels like a $75 helping of White Alba Truffled Tagliatelle.

So it may come as a surprise to learn that the short, muscular, sandy haired woman—who beat out Mario Batali on Iron Chef—was raised in the 70s in an immigrant farming community in California’s Central Valley. Her family cultivated cotton, sugar beets, and rice—”none of it organic, lots of chemicals used”—she told an audience at a TEDx conference in San Jose where she gave a talk in early December. In fact, her dad “would get angry if you mentioned organic at the dinner table.” Des Jardins’ mother and grandparents were Mexican and her father came from French Acadian roots; the whole family shared a love for hunting, growing, and preparing meals.

After a childhood spent making Mexican soul food with her grandma, who called her “mijita” (meaning “my little one,” and also later the name of two of Des Jardins’ San Francisco restaurants), she dropped out of University of California-Santa Cruz at 17 to work in kitchens so she could support her dream of becoming a ski bum. A chef she apprenticed with in Los Angeles saw more than skiing in her future (though nowadays Des Jardins still rips in Tahoe when she can), and advised her to make her way to France.

By the time she had enough experience under her belt overseas and back in California to open Jardinière in 1997, she had begun to feel unsettled by the elitism of fine dining. Des Jardins wanted to undo some of French kitchen structure’s stuffiness and create an environment where the staff was happy and excited to promote her restaurant’s finely tuned food. Jardinière offered health care benefits to its employees even before San Francisco passed its health care mandate for restaurant workers. With many immigrant employees, she also began teaching English classes to some of her staff. Over the years, Des Jardins, now 47, has trained countless emerging cooks, and she says her lingering career goal at this point is to help them launch and run their own businesses.

For all its swankiness, Jardinière has made some efforts at eroding fine dining’s exclusivity. The restaurant offers a tasting menu on Monday nights for $45 (including wine), a chance for the staff to experiment with different global cuisines. Des Jardins says she came up with the idea after the 2008 recession and it stuck: “It’s become a really beloved night for us. And the average check is probably half of what it is the rest of the nights a week.” At Mijita, Des Jardins’ Mexican restaurant with two locations in San Francisco, the typical bill runs around $12, standing as testament to Des Jardins’ middle class roots.

Des Jardins feels more strongly about buying local than about paying for fancy labeling. “Organic doesn’t mean all that much,” she says. “When a company like Whole Foods is buying organic blueberries coming from Chile, the environmental footprint of those blueberries is that they were grown in Chile, they were put on a plane, they were flown someplace, and then they were trucked someplace.” 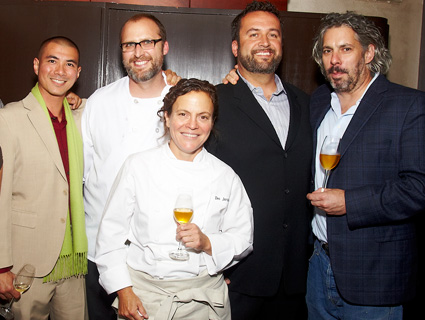 She has been known to turn a meal into a political statement. At the eve of the foie gras ban in San Francisco, the restaurant threw a foie gras feast, complete with foie gras ice cream and even, somewhat ironically, salad topped with foie gras. “The foie gras industry is really minor compared to other industries,” she says in response to my questions about the foie gras blowout. “Think about the pigs and chickens and cows—those are the things we’re producing in mass quantities, those animals are living horrible lives and dying horrible deaths.”

Lately, Des Jardins has been mulling the question of portion size. She’s reduced meat serving sizes at Jardinière from 6-7 ounces to around 4 ounces—a gutsy move because, “the last thing you want do in a high-end restaurant is have people say you have expensive, skimpy portions.”

I caught up with Des Jardins during the afternoon gelato break at the TEDxSanJoseCA Women conference in December to chat about wasting less food over the holidays, making original winter drinks, and finding seafood that’s gentler on the ocean. (See the video of the interview above.)

Mother Jones: Do you think there’s a food Americans are eating too much of?

Traci Des Jardins: I think protein’s really an issue. In a lot of cultures, proteins are an accent to a meal. Little pieces of meat in a meat sauce in Italy, in Chinese food. We Americans want that big piece of steak, that big pork chop. And we eat protein with almost every meal. You don’t need to do that. How about if I have protein like twice a week? And get my proteins from other things, legumes—I mean, I’m talking about meat proteins and fish proteins rather than those other things. I think that’s a way we need to shift, because we’re just violating our planet. We’re eating all the fish in the ocean. I mean we’re destroying our natural supply of fish. We’re just going to eat them all. They’re just going to be gone. And then we’re going to be left with something else. And I don’t know about you, but I don’t really like eating farmed fish. Uh unh.

MJ: Is there some food or ingredient that we could be eating more of?

MJ: Any tips on minimizing food waste this time of year?

TDJ: That’s a tough one. I hate leftovers, personally. So I think trying to figure out sort of a plan for those leftovers to make them not just a reheated thing you had the night before. So for example, Thanksgiving. I had one brined turkey—I cooked three turkeys, I had one brined turkey and two heritage turkeys. So the heritage turkeys I took apart and cooked them without their bones in them. I took those bones and made a soup stock, and then the brined turkey, cooked that on the barbeque, took all the meat off of it, and took those bones off and put them in the stock with the other bones. So they say you can’t make stock out of the brined turkey pieces because they’re too salty. But I had a combination. So I made this great soup. And that wasn’t what we wanted to eat at the end of Thanksgiving weekend when we had been eating turkey for three days, but froze it and it was a huge meal. I mean it was a huge couple meals. Thinking about that kind of thing and being about to take food and turn it into the next meal, take what you’ve eaten one night and turn it into the next meal, without it being exactly the same. You know, a roasted chicken one night and then I’ll take the chicken and turn it into a beautiful chicken salad the next day.

MJ: Is there a dish you traditionally make over the holidays?

TDJ: I cook Mexican food over Christmas. We always celebrated Christmas on Christmas Eve, that’s very Mexican. So even though my grandmother wasn’t someone that made tamales, it’s a traditional thing in most Latin families and so I’ve taken it up for myself and we always have a big Mexican feast on Christmas Eve.

TDJ: One of my bartenders made a drink the other night and they did these boozy cranberries. They took cranberries and soaked them in booze like you would like a brandied cherry or whatever. That was kind of fun, they were really yummy. And that would really kind of go with vodka or gin or whatever. But it was a cute little garnish. I thought that was kind of cool.