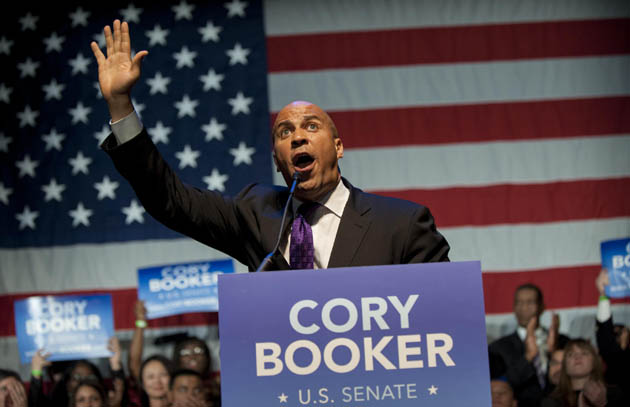 When Cory Booker’s name is mentioned in the same sentence with “green,” it’s usually in reference to the money he attracts. Still, in his six years as mayor of Newark, New Jersey, he’s been no slacker on the environmental front.

Tooting his own horn on his website, Booker credits himself with an impressive list of green achievements, among them creating “the largest parks and green-space expansion in Newark in over a century,” building hundreds of green affordable housing units, securing $1.5 million to reduce urban heat island effect, and creating “acres of urban farms” that benefit underserved neighborhoods.

Booker, who just trounced his tea party challenger, Steve Lonegan, in the race to succeed longtime Sen. Frank Lautenberg, now takes this experience, along with his state’s deep tradition of environmental justice advocacy, to Washington, DC. But when it comes to environmental policy, Booker has huge ECCO sandals to fill, and not everyone is as impressed with his green chops as he seems to be.

When Lautenberg passed away in June, Congress lost not only one of its most liberal members, but also one of its greenest. Lautenberg gave so much of his life to public transit that after his funeral his casket was transported via Amtrak, the train service he fought to keep alive. He pledged the same support for ferry service, which has also shown signs of decline lately.

Beyond that, Lautenberg was a primary sponsor of chemical labeling and safety legislation—a favored cause of celebrity actresses Jessica Alba and Jennifer Beals—and routinely scored at the top of his congressional class on report cards issued by food policy, parks conservation, and clean water advocacy groups (alternately scoring at the bottom among conservative advocacy and business interest groups).

And it’s not just Lautenberg’s legacy, but also the legacy of environmental justice in his city and state, that Booker will continue to be judged against.

New Jersey, and Newark in particular, is not an easy place to be green. For much of the 20th century, the city was one of the nation’s most cluttered urban landscapes for ports and manufacturing industries. Since the deindustrialization dawn of the 1970s, it has become one of the most concentrated areas for waste and garbage sites, not to mention poverty and unemployment. The list of Superfund brownfield sites there is ridiculously long for such a tiny area.

This is why Newark is one of the cradles of environmental justice advocacy. Back in 1997, a group of citizens from the city’s Ironbound community had grown sick and tired of companies using their neighborhood as a garbage disposal, so they successfully blocked the construction of a new sewage treatment plant. It’s just one of dozens of stories in Newark where citizens and advocacy groups stood up to polluting facilities, either shutting them down or forcing them to clean up their acts.

It doesn’t stop in Newark, either. Around the same time as the Ironbound battle, black and Hispanic residents of Camden had teamed with pioneering environmental justice attorney Luke Cole to stop a permit for a new concrete plant in their neighborhood, arguing that they were already overburdened with more chemical plants, transfer stations, and abandoned buildings than anywhere else in the city.

It was “the first recognition by any court that African Americans and Latinos were experiencing discrimination with regard to the siting of noxious, polluting facilities,” attorney Olga Pomar told the New York Times.

Booker, who famously lived in a public housing project in the city’s impoverished Central Ward, brings with him an intimate understanding of the reality that many underserved and minority communities face. But not everyone believes he’ll be a strong champion for those vulnerable to environmental problems.

“Let’s just say Booker is no Frank Lautenberg on environmental issues,” said Wolfe by email. “He’s got lots of the buzzwords ‘sustainability’ and ‘environmental justice’ and ‘green jobs,’ but on the regulatory side, [he] did nothing to block the re-issuance of a garbage incinerator permit when that facility should have been shut down.”

That incinerator, run by the Covanta Corp. and one of the largest in the state, has been a sore spot in Newark for years. Newark community organizations, including the Ironbound Community Corporation, pressured Covanta and Gov. Chris Christie to install state-of-the-art pollution emissions control systems so that it wouldn’t continue to spew carbon monoxide, sulfur dioxide, and smog into the dense surrounding neighborhoods.

But that incinerator should have been closed for good, said Wolfe. “The retrofit with scrubbers was a band-aid.”

According to Wolfe, Booker has allowed Christie and corporate redevelopers to have their way with Newark without standing up much to either.

“Frank was a leader,” said Wolfe, “Booker not so much.”

She cites his establishment of the city’s first ever environmental commission, which oversees the city’s green policies and practices. She currently chairs the commission. Gaddy also points to Booker’s creation of Newark’s Office of Sustainability, which ensures that city operations reduce waste and run efficiently, and also assists Newark communities with issues like soil remediation, recycling, stormwater management, and food security.

Gaddy’s only disappointment is that the office hasn’t installed a cumulative impact ordinance, which would require a state environmental review and impact statement for any new, large industrial or commercial development, and would have the city prepare an environmental resource inventory to serve as a baseline for additional environmental impacts. It would also establish a mitigation fund that companies could use to offset their impacts.

“We will have companies who say it’s unfair,” said Gaddy, “but what’s unfair is that we get all of the pollution from these facilities, but not any of the benefits. We don’t get any of the jobs, but we deal with all of the trucks. We have enough pollution and we can’t allow anymore to come into the city without accountability.”

Asked if she thought Booker could continue to be a force for communities like hers in the Senate, she said, “Oh, most definitely.”

“Frank Lautenberg was a great environmentalist for the state and I’m confident Cory Booker will continue to lead the same charge,” said Gaddy. “He understands disproportionate health disparities and burdens on people of color and those of low income, and he will be a great champion for our environmental concerns.”