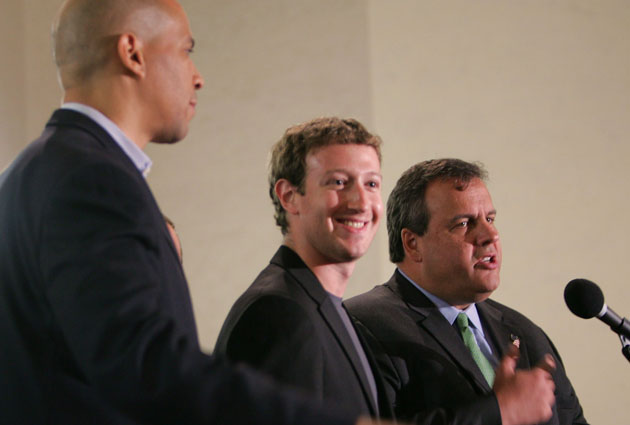 Reports are surfacing that Mark Zuckerberg and other technology leaders are planning to launch a new, yet-to-be-named advocacy group that will push for immigration and education reform. The move is a big deal for Zuckerberg, who has mostly avoided politics in the past, but has a reported $13.3 billion to put into the game if he chooses to.

What would this influence look like? There could be clues from Zuckerberg’s last foray into advocacy work, the high-profile $100 million he donated to Newark public schools in the fall of 2010. That September, Zuckerberg appeared with New Jersey Governor Chris Christie and Newark Mayor Cory Booker to announce the donation on the Oprah Winfrey Show. This was right before the premier of The Social Network, which portrayed Zuckerberg as a narcissist who stole the idea for Facebook.

News of the donation captured national attention for a moment, then faded. In Newark, a local foundation established by Zuckerberg and the state have spent more than two years deciding how to best create a schoolyard revolution with $100 million dollars. At first, the “Facebook money,” as it’s called in Newark, helped the state hire consultants and establish several new charter schools. But the reform effort has floundered at moments: The first million dollars went towards a poorly conducted community survey that had to be re-worked by Rutgers and New York University, and criticism was fierce when a foundation board established to decide how the Facebook money was spent included only one Newark resident: Cory Booker. (“Yes, it’s their money. But it’s Newark’s kids,” an op-ed that ran in the Star-Ledger read.)

Then last November, nearly $50 million of Zuckerberg’s money went to pay for a new teacher’s contract, the first in New Jersey to offer performance pay for teachers who are deemed as “highly effective.” The contract offers up to $12,500 in bonuses for the teachers rated as the best in the district. It’s the first contract in New Jersey to offer performance-based pay, a policy that’s been instituted in a few cities such as Washington, DC. In DC, the plan was so controversial that it might have cost Mayor Adrian Fenty his job. “I think it helped—I know it helped—to be on our side of the table and have deeper pockets,” one school district official said about the Newark negotiations.

The teacher’s contract was negotiated relatively quietly. But the pushback continues from those in Newark who think it’s wrong for the Christie administration to have access to so much extra money with no need to listen to the community or the public. “In my conversations with [school commissioner] Chris Cerf, it became abundantly clear to me that he saw the money to be a spigot for funding his school agenda,” said Paul Tractenberg, a law professor at Rutgers University, who describes the donation as a catalyst for “a broader top-down strategy” towards public education.

Frustrated Newark parents and graduates, along with the American Civil Liberties Union, believe that Booker and others have been far too secretive about their agenda and how they’re spending Zuckerberg’s millions, so they fought and won a lawsuit to force the city to release emails from Booker that relate to the funds. The emails weren’t groundbreaking, though they did reveal Sheryl Sandberg’s deep involvement in orchestrating the donation and rolling it out. Meanwhile, Booker has raised at least $54 of the $100 million of the matching funds he needs, money that came from the Bill and Melinda Gates Foundation and New York hedge fund donors.

With the merit pay contract, Newark used Zuckerberg’s money as a lever in negotiations to create what one reform leader in Newark called a “higher level” of change. Zuckerberg’s new group doesn’t even have a name yet, much less a public agenda. But if reports that the group plans to get involved in education prove true, Zuckerberg, like Bill Gates before him, could become another tech giant stirring up the education world.