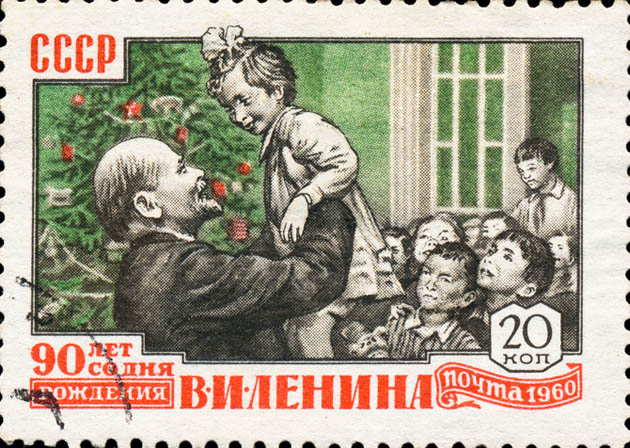 Your kid probably isn’t a Leninist, but research suggests she’d like to divvy up other people’s stuff equally. Solodov Alexey/Shutterstock

At the playground, I watch my 10-month-old son beeline to the center of the sandbox where there is a bright pink shovel. But before he gets there, a rambunctious 2-year-old snatches up the coveted toy first. As my son watches the shovel slip away, a wobbly 14-month-old comes over and offers him a half-chewed cookie. I tear up a bit at this random act of kindness. It’s probably just “hormones,” but I am touched by the empathy that this little person is showing my child.

What caused this toddler to “do the right thing” and show kindness to a stranger? Was it good parenting or an innate personality trait? That’s the mystery that cognitive scientist Paul Bloom, author of the recent book Just Babies, is working hard to figure out: Can the youngest of our species distinguish good from evil practically from birth—or does morality need to be taught?

Philosophers like John Locke and psychologists like Sigmund Freud took for granted that we are born with a blank moral slate. But Bloom rejects that. He argues that babies actually have a natural sense of morality and fairness—one that simply emerges, like many other developmental milestones. “I think all babies are created equal in that all normal babies—all babies without brain damage—possess some basic foundational understanding of morality and some foundational moral impulses,” says Bloom on the Inquiring Minds podcast. “They’re equal in the same way that all babies come with a visual system, and the ability to move around, and a propensity to learn language.”

Bloom thinks this sense of morality emerged via Darwinian evolution, just like every other adaptive trait that marks our species. But how can he tell? How does one study morality in babies who can’t wax poetic? Scientists have come up with several clever solutions to break the language barrier.

“The way we do it here at Yale,” says Bloom, “is we show babies one-act plays.” These one-acts, playing at the Yale lab run by Karen Wynn, who is Bloom’s colleague and wife, star puppets who model behaviors that we would label as naughty or nice. Similar experiments are being conducted at the Center for Infant Cognition at the University of British Columbia, where Wynn’s former graduate student, Kiley Hamlin, now runs her own lab.

We asked Hamlin to share some short videos of the one-acts that Bloom describes in his book and on the podcast. In one play, for example, a dog is enjoying playing with a ball. She loses control of the ball or, depending on your interpretation of events, tosses it to one of two nearby cats. Then one of two things happens. In the first video below—from Hamlin’s lab at UBC—the orange cat refuses to return the ball and instead runs away with it. In the second video, by contrast, a gray cat returns the ball to the dog.

After watching the play, the babies are given a choice: Which kitty would they like to play with—the helpful gray one or the naughty orange one? The scientists carefully monitor the children’s reactions. “With the younger babies, like 3-month-olds, we can see which one they orient to, which one they look at,” says Bloom. Older babies can actually reach for and grab the preferred character. And with babies and toddlers alike, time and time again, “we find they look to the good guys.” Like in this video, again from Hamlin’s Lab:

But these labels of “good guy” and “bad guy” are adult constructs. Are we simply projecting our own judgments onto the behavior of the babies? “There’s no consensus even for adults what makes something moral or not moral,” acknowledges Bloom. “But one cue for adults, at least, is intuitions about reward and punishment.” So the scientists investigated how babies respond when the bad character is punished and the good one is rewarded.

For example, another play tells the story of a cow who is trying to open a plastic box full of toys. Flanked by two little piggies, the cow struggles with the box for a few moments. Then the play has one of two possible endings. Either one of the pigs helps the cow open the box and get the toys, as in this video…

…or the other pig hinders her efforts by jumping on the box and slamming it shut, as shown here:

Babies under the age of 1 then watch another character either reward or punish the naughty and nice pigs by handing out treats; the babies show a preference for characters who reward good and punish evil. Toddlers are given the opportunity to administer the reward or punishment themselves, and they tend to punish the hinderer and reward the helper.

Interestingly, as the toddlers get a little older, this sense of fairness seems to morph into pure egalitarianism—at least when it comes to distributing other people’s stuff. “There’s a lot of research suggesting that when it comes to divvying up resources that strangers possess, they are socialists—they like to share things equally,” says Bloom.

When asked to hand out treats to other people or to stuffed animals, 3- and 4-year-old children will divide resources equally, if at all possible. Even if they know that one person deserves more of a resource than another because she worked harder for it, they will still opt for equal distribution. In a study of 5-to-8-year-olds, when it was impossible to divide resources equally—for example, if the children were given five erasers to distribute to two people—they would even throw the extra eraser in the trash instead of giving more to one person than the other.

But what happens when the children being studied are themselves the lucky recipient of the extra resources? Well, that changes everything. “So, they’re very egalitarian when it comes to other people,” says Bloom. “When it comes to themselves, they’re not the slightest bit egalitarian. Particularly when dealing with strangers, they want everything.” So while babies do seem to have an innate capacity to separate good from evil, their moral lives are still fairly limited. “Babies are kind of jerks,” Bloom says.

It turns out that humans aren’t the only primates that have evolved a sense of fairness. In one study, Capuchin monkeys performed a task and were rewarded with slices of cucumbers. But when they observed another monkey getting a grape—which tastes much better—for doing the same amount of work, they went on strike. The previously rewarding cucumber slices were no longer worth the effort.

Does this mean that babies (human or otherwise) are making actual moral judgments? Or are they simply learning what types of behaviors get rewarded in the society in which they are born? In other words, are the scientists really just observing a tool that helps infants navigate complex social interactions? As Bloom points out, babies don’t have a lot of control over their own lives—they can’t choose the people with whom they interact. So what’s the point of having a preference for those who are fair or moral? “It could be when choosing a social partner, and particularly who to learn from, they pay attention to how these individuals react towards other individuals,” notes Bloom.

So what separates a morally mature adult from a well behaved toddler? “As we get older, we become more like moral philosophers,” says Bloom. “We become more able to use reason and deliberation to figure out what’s right and wrong.” And we tend to grow out of our selfish phase. “Most adults are far nicer than babies and 2-year-olds,” says Bloom.

Inquiring Minds is a podcast hosted by neuroscientist and musician Indre Viskontas. To catch future shows right when they are released, subscribe to Inquiring Minds via iTunes or RSS. We are also available on Stitcher. You can follow the show on Twitter at @inquiringshow and like us on Facebook. Inquiring Minds was also singled out as one of the “Best of 2013” on iTunes—you can learn more here.