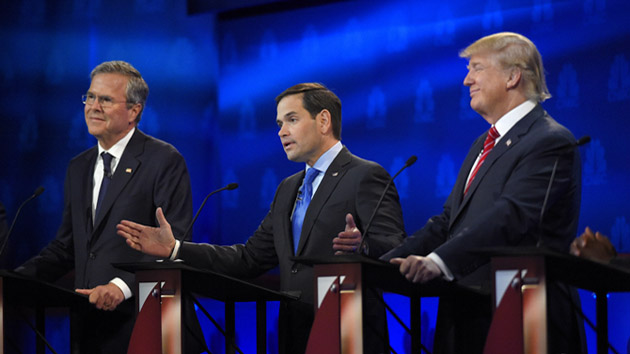 The presidential debates so far have tended more toward theater of the absurd than substantive policy issues, especially on the crowded Republican stage. But whatever you make of the candidates’ discussion of other issues, it’s clear that climate change has barely surfaced. An analysis by Media Matters of the first eight primary debates found that as of mid-January, a grand total of nine (!) questions about climate had been asked. That’s about one-tenth the number of questions posed on “non-substantive” issues, which the group defines as “the political horserace, campaign gaffes, and other topics that are not related to any policy issue”: 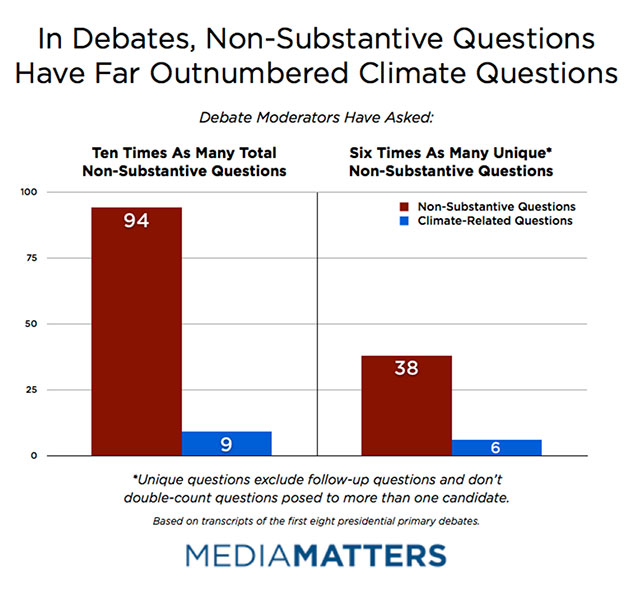 During last weekend’s Republican debate, ABC’s moderators didn’t ask any questions about global warming. But they still found time to ask the candidates for their Super Bowl predictions. The lack of climate questions has been disappointing for many environmentalists and scientists, who were hoping for a clearer view of how the different candidates would (or wouldn’t) confront global warming.

We asked climate scientists and activists (including Mark Ruffalo!) to share their ideas for debate questions.

Hillary Clinton and Bernie Sanders both accept the mainstream scientific consensus on climate change but have different ideas for dealing with it. Clinton wants to strengthen tax breaks for solar energy, for example, while Sanders has pushed for a tax on carbon emissions. On the Republican side, the conversation has ranged from Ted Cruz and Donald Trump’s outright science denial and Jeb Bush’s skepticism to Marco Rubio’s insistence that there’s nothing the government could do about climate change even if it were real.

The moderators need to dig much deeper. The Pentagon has identified climate change as a major national security threat; cities and states are investing in clean energy and protection from extreme weather; and President Barack Obama will soon officially sign the global climate deal reached in Paris.

“It’s amazing when you think of the infrastructure and other changes we’re gonna see, that people are not asking hard questions about ‘what is your plan to address emissions, and prepare for the changes?'” says Vicki Arroyo, executive director of the Georgetown Climate Center.

Still, climate change is complicated! Asking good questions about it can be hard. So to help out the moderators, we asked a bunch of the biggest names in climate science and environmental activism (including Mark Ruffalo and Neil deGrasse Tyson!) to share their ideas for the questions candidates should face. You can read them below. (We’ve lightly edited some of the questions for length and clarity. We’ve also added a few links to them, so you can learn more about what they are referring to.) And when you’re done, you can let us know in the comments or on Twitter what you’d ask the candidates about climate change.