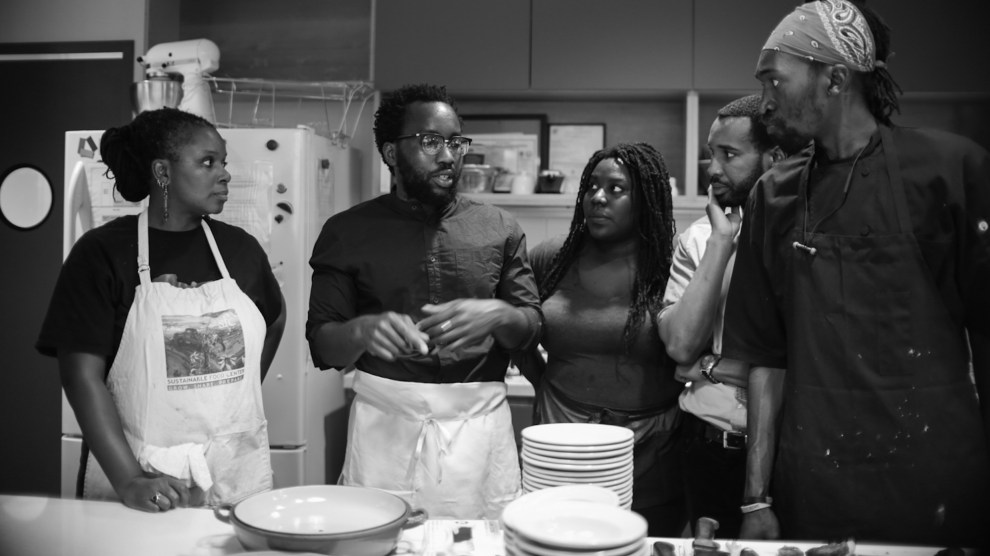 Tunde Wey, center, before a pop-up dinner in Austin

Bite is Mother Jones‘ new food politics podcast. Listen to all our episodes here, or by subscribing in iTunes, Stitcher, or via RSS.

At first, working at Revolver in Detroit, he expressed his politics “without vocal rancor, inherent in the sloppily plated colorful and strange dishes I served.” Later, coming to grips with blackness as it’s experienced in the United States, Wey realized “there is probably nothing more politically explicit than the assertion of (black) identity in the face of systemic censure.”

That’s when, starting in New Orleans—”the most African city in America”—Wey launched a traveling pop-up dinner series, Exploring Blackness in America. “Through these dinners I purposefully contrive dining spaces that prioritize black experiences—spaces where spicy Nigerian food is background music to lively conversations about black excellence, the erasure of the black woman, colorism, double consciousness,” he writes. The series—with recent stops in Detroit, Austin, and Boston—made quite an impression, generating items in Vogue, NPR, and the LA Weekly. Wey now shuttles between Detroit and New Orleans, plotting his next venture: a full-on restaurant, if he can find investors.

Kiera Butler and I caught up with Wey in New Orleans via phone, and at a tense time: the morning after the killing of Alton Sterling in nearby Baton Rouge (but before the killings of Philando Castile in St. Paul, Minnesota, and five police officers in Dallas). Wey talked us through some of the paradoxes of cooking while black, wowed us with anecdotes from his two-week stay at a migrant detention center in El Paso, Texas—where the chicken wings are apparently pretty good—and tantalized us with the fundamentals of Nigerian cuisine. He left us hungry to read more of his writing—and try his food.

In the meantime, we hit him up for a recipe.

Frejon
This is a holiday dish served on Good Friday by Catholics in Lagos, Wey says. It has Portuguese origins.

Wash the beans and soak them in plenty of water for a couple of hours.

In a pot, cover the beans with the coconut milk and enough water to submerge them by a couple of inches. Wrap the cloves in the cloth,  add them to the pot, bring it to a simmer, and cook the beans until they’re soft.

Blend cooked beans with coconut cream until smooth. Return the blended beans into the pot and cook on medium low heat, adding the sugar, spices, a little salt, and some black pepper. Let simmer for about 10 minutes.